Oh not this again! Why are you bringing this nonsense up yet again, after already doing so last June, and after I'd responded to you on that thread? Why pretend it's still a mystery, after reading the explanation I gave? This would seem to me to be an example of someone not wanting to know the truth, but preferring to think there's still some sort of mysterious cover-up involved.

There was no 'rocket launched' from the surface of Mars! What looks like an anomaly in the photos is nothing more than a data glitch.

Back in June I responded to you with the following information. I'll repeat it here, almost as I wrote it then, for those who didn't see it at the time.

This incident happened in 1989, almost 30 years ago, and it remains a mystery only in the minds of the conspiracy crowd, who haven't bothered to move on from 1989 and find out what is known about it. It's all there, on the internet, if they'd care to search for it, and that includes you, Sally!

Instead of focussing on just one picture of a 'rocket being launched from Mars', you could have looked up the entire data set from the Phobos mission and seen that this anomaly appeared throughout the set. 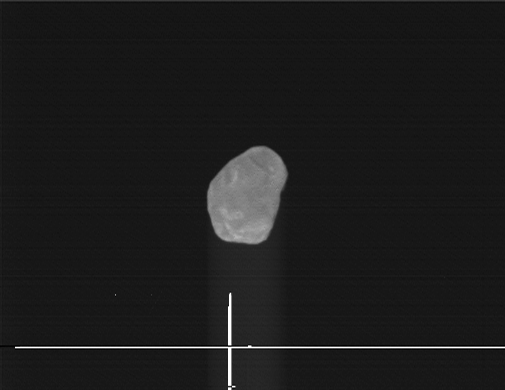 Here are all the images:

You can clearly see that the artifact occurs in quite a few of the photos on the infra-red Channel 3, dating from a month previous to the loss of the craft. Since it runs vertically along the scan lines, it can only be some sort of transmission flaw, not a real object. It first appears on February 21, 1989, the last time on March 25, 1989, over a month later. Here's an animated gif, showing the artifact appearing in exactly the same location in each image that contains it, which is a clear indication it's nothing more than a data glitch:

The craft, by the way, was lost on the 27th March, two days after the last photo was transmitted. It wasn't a rocket fired from the surface that you're looking at in the final picture!

As for the elongated shadow, I really don't see how this even became a mystery in the first place. It's nothing more than the shadow of Phobos, taken when the sun was at a low angle. How anyone thinks is a mystery is hard to fathom. This should have been obvious, especially when an example from home is easy to find - just how elongated is a human shadow when the sun is low in the sky? And it should have been cleared up completely when two other later missions took similar photos of Phobos' shadow, such as this Mars Express image from 2003,

and this Mars Global Surveyor image from 1996: Mission control for both these missions knew exactly where Phobos was in relation to Mars at the time, so they were in no doubt as to what they were looking at here.

As usual, the facts are just as interesting, if not more so, than the myth! Please take the time to familiarize yourself with what actually happened, rather than what some conspiracy site would like you to think.