Global Village :  The Official GrahamHancock.com forums
For good-natured and mutually-respectful discussions of politics and current affairs. Soap-boxing and the promotion of extremist causes motivated by hate will not be tolerated by our moderators.
Welcome! Log In• Register
Go to: Forum Home•Board•New Topic•Search
Re: Today Will Go Down As The Stupidest Day In Presidential History
Author: Audrey ()
Date: February 15, 2019 06:35PM
Holy Dementia Batman did you see it!! Wow, an incoherent babbling lunatic. He would pause, lost for words obviously losing his train of thought many times and then continue with drivel. Everyone sat in this outdoor mini theater watching an episode of One Flew Over the Cuckoo's Nest and the MSN makes no mention of his glaring mental incapacity. Wm Barr & Kirsten were sitting right in front of him. It is inconceivable that they would not see a mentally incapacitated POTUS that is a blatant danger to our country. The GOP has to do something about him, it is unconscionable if they don't.

The silence in the small crowd was deafening. No applause during or after the address. Were they all stunned? The experts say a "loose tongue jut" indicates
• I've been caught
• I've been bad
• I've done a stupid thing
and the chimp did this many times during this address. 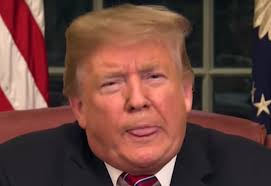