Mysteries :  The Official GrahamHancock.com forums
For serious discussion of the controversies, approaches and enigmas surrounding the origins and development of the human species and of human civilization. (NB: for more ‘out there’ posts we point you in the direction of the ‘Paranormal & Supernatural’ Message Board).
Welcome! Log In• Register
Go to: Forum Home•Board•New Topic•Search
Re: Menkaure's Sarcophagus, Where did Vyse really send it ?
Author: Thanos5150 ()
Date: April 11, 2016 08:51PM
Jon Ellison Wrote:
-------------------------------------------------------
> You seem to be saying that the AE or previous
> cultures or just good old father time is incapable
> of totally eradicating any tooling or equipment
> used by a hypothetical pre civilization in the
> construction and manufacture of megalithic
> monuments and precision hard stone statuary.

Where do I say this "seemingly" or otherwise? Maybe if you quoted what the person said once in awhile with your response there would be less confusion for you.

Which "previous cultures" do I refer to exactly? And why does this phenomenon only apply to a "hypothetical pre civilization" and not historical times? I believe this is the point I was making.

> Conversely you are perfectly comfortable with the
> idea that the dynastic AE did in fact somehow
> totally sanitize these construction sites of their
> own tooling, equipment and techniques leaving no
> evidence today of how they achieved such feats of
> engineering and manufacture.
> No tools, no equipment, no techniques.
> All lost over a mere 4500 years, yet the AE
> artwork and the implements of ordinary life and
> death remain in abundance.
> How can that be?

Ask yourself- indeed, how could this be?

> What could possibly eradicate out of existence all
> artificial artifacts other than those made of
> stone?

We have had this conversation many times over.

> How can you be certain that this was carved by the
> early dynastic AE?

You are quick to question its provenance because all you see is a stone statue which could possibly not be made by "bronze age primitives", yet you have no interest in what it is meant to depict, who, why, what the inscriptions say, or even understand the context of the style of kilt, beard, hair, crowns, what they are holding in their hands, ect as if all this were somehow meaningless and/or because you know nothing of such things therefore it can be interpreted any which way one desires.

> Do you believe that the glyphs are contemporaneous
> with the sculpture? But one of many found at Giza dedicated to Menkaure alone: The inscription at the base says:
"The Horus (Kakhet), King of Upper and Lower Egypt, Menkaura, beloved of Hathor, Mistress of the Sycamore. Recitation: I have given you all good things, all offerings, and all provisions in Upper Egypt, forever.” 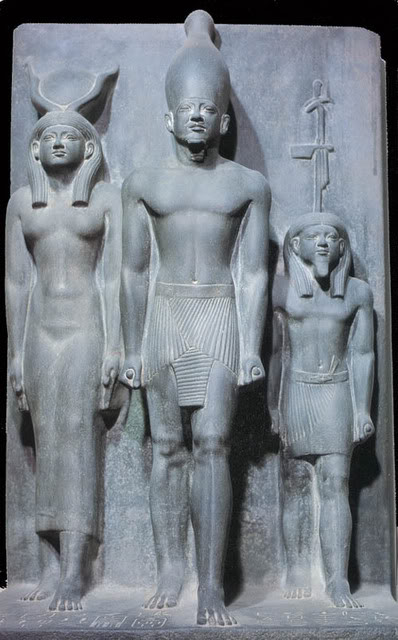 You might note above the head of the smallest figure (which has meaning) on each statue is a glyph which represents the standard of the nome with which dedicated the statue the goddess is associated. Obviously these at the very least "contemporaneous" yet are these the marks of a lost civilization or do you think they might actually originate and have contemporary meaning the the AE? One would also easily note the largest goddess, which also has meaning, is Hathor identified by the sun-disk/Uraeus crown which she is distinguished by throughout the entirety of AE history.

The biggest fallacy of the fresh thinking meme is that no one could possibly know anything about anything because they do not therefore all look at these artifacts with the same level of complete ignorance which leaves any and all to just make up whatever they want and therefore anyone could be "right or wrong". Is it truly lost on you how patently stupid this is?

So, is it possible the inscription were not contemporaneous with the making of the statute i.e. the OK? Sure, this is "possible" however unlikely, but to the greater point could the statue itself predate Naqada/Dynastic history the odds are so infinitesimally small the answer is most certainly a "no".