Mysteries :  The Official GrahamHancock.com forums
For serious discussion of the controversies, approaches and enigmas surrounding the origins and development of the human species and of human civilization. (NB: for more ‘out there’ posts we point you in the direction of the ‘Paranormal & Supernatural’ Message Board).
Welcome! Log In• Register
Go to: Forum Home•Board•New Topic•Search
Perring and Vyse
Author: Martin Stower ()
Date: June 01, 2014 12:33AM
I wrote: “Do I need to explain how the works relate?”

It may help some readers to do exactly this.

My object here is to clarify the relationship between the following publications:

In 1868, Charles Piazzi Smyth made these relevant remarks in a footnote, referring to

An enormous folio book or portfolio, usually termed Perring’s Plates of the Pyramids, and containing many excellent lithographs of them from his drawings; but the book was got up, and its letterpress edited by Colonel Howard Vyse, and includes contributions from Dr Birch, Mr Lane, and Mr Andrews as well.

In his preface (Operations, vol. I, p. xv), Vyse states the following:

. . . These details, however, it is to be feared will not be completely understood, excepting by a constant reference to Mr. Perring’s plans, published in two numbers, by Mr. Fraser, of Regent Street, from which the sections and admeasurements inserted in these volumes have been copied. . . .

In summary, the work published in Perring’s name is properly regarded as part of the overall Vyse opus. (Doubtless some bad reason will be found for his giving Perring authorial credit.) The architectural sections in Vyse’s book are smaller-scale versions of the ones in the larger work: copies, or based on the same source drawings by Perring. Lithography of this period was not a photographic process: a skilled artisan literally copied the drawings onto stone, using special crayons.

What do we see in the lithographs?

In the first part of the Perring work, we see this: Copyright in these images remains with the University of Liverpool.

It would help at this stage to see Perring’s actual drawings, but these appear to be lost. With lithographs (as outlined above), we are always at one remove from the drawings and variation is introduced by the efforts of different lithographers (or the same lithographer working at different scales). In the book we see the following. Please note how small this is and remember that someone had to draw this, with a fine crayon: In the larger-scale version, we see two marks below the horned viper, corresponding to the “dots” or paint flecks seen in other renditions and in photographs. In the smaller version, they’ve disappeared. Perhaps by this time, they were understood to be accidental and not part of the inscription, which was duly “cleaned up” (much as some other people have engaged in theory-driven “cleaning up”).

Again, for reference, the relevant material in the manuscript journal 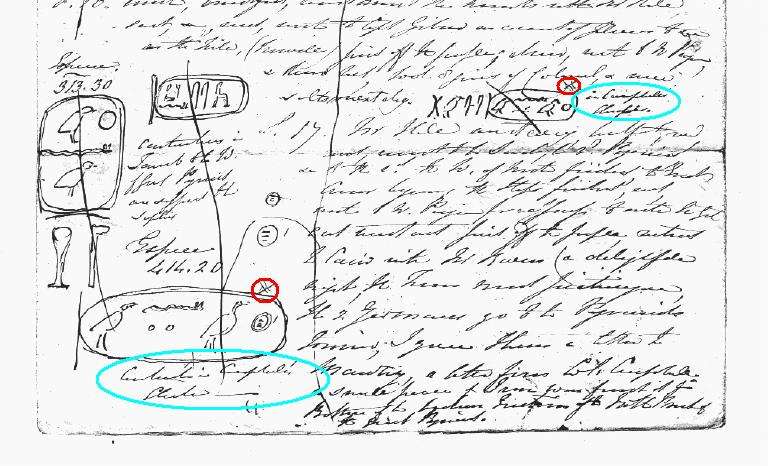 Creighton’s assertion that Vyse did not publish this inscription may in my opinion be filed with the rest of his boggling untruths.