Mysteries :  The Official GrahamHancock.com forums
For serious discussion of the controversies, approaches and enigmas surrounding the origins and development of the human species and of human civilization. (NB: for more ‘out there’ posts we point you in the direction of the ‘Paranormal & Supernatural’ Message Board).
Welcome! Log In• Register
Go to: Forum Home•Board•New Topic•Search
Re: The Mud Slinging Has Started
Author: Martin Stower ()
Date: May 31, 2014 12:44PM
Started with this post, do you mean?

See what I mean?

> Just stopping by to set a couple of things straight.
>
> As far as I am concerned, Vyse intended a circle in the smaller
> disc. As you can see (image below) the centre mark in the top
> circle looks like the letter 'C' and that, to my eyes, appears
> to be an incomplete circle. The line above this appears to me
> to be Vyse (as he has done with many of his other graphics
> throughout his journal), placing a strike-through across this
> particular graphic. I should also point out that I am not the
> only researcher who considers that Vyse intended to draw a disc
> with circumpunct i.e. Ra.
>
>

'"He couldn't get a sense out of the "Kh", therefore he
> philosophises on this page of his journal about the possibility
> to write a "Re" with lines in it instead of a dot... On the
> right side [sic]he notes, that this disc can also be written
> with a dot in the middle (the small circle on top) ..." From
> here:The
> Horus Name


Frank Dörnenburg’s conjectures are not my responsibility. I’ve told you this before, remember?

> I should add here, this is a small point. Even if this were a
> "misfire" attempt at drawing a circle with 3 lines, it doesn't
> affect at all what I am arguing but, actually, strengthens it
> because what Stower is, in fact, implying is that Vyse, when he
> knows he has to accomodate lines in the disc he would then make
> such space. So why didn't he do so in the disputed cartocuhe on
> that page with just the blank disc? (Thanks for the help,
> Stower).

Perhaps if I type this slowly, you’ll get it. This was in his private journal. It was not a public presentation. The drawing did not need to be comprehensive. All it needed to do was serve the purpose for which Vyse drew it. (My conjecture on that point: to show the characters following the cartouche.)

Thanks for your help also in debugging the critique and making it better.

> Stower then alleges I did not see the caption "in Cambell's
> Chamber" in Vyse's journal entry. I suggest he did not properly
> read my 'Atlantis Rising' article, particularly page 70 where I
> write:
>
>

“...On June 16 (over 3 weeks later) he draws the plain
> blank disc again from the chamber (we know this because of the
> two dots under the snake and also because Vyse writes alongside
> 'in Campbell’s Chamber')."


My profound apologies for missing this important point. Yes indeed, Creighton does mention this on page 70 of the magazine. I must have been misled by his not marking it on the image of the relevant page of the journal (reproduced on the preceding page of the magazine).

You will note that I have repeatedly underlined the need to read your article, in order to follow the discussion. So far, not one person has picked me up on this. I infer that either (a) no one has read the article, or (b) no one has read it with much attention.

> So, far from missing the caption alongside the disputed
> cartouche as Stower alleges, the caption is there and is used
> by me in the article to demonstrate the contradiction Vyse
> presents on this page between the two cartouches.

On the contrary, Creighton, it makes your presentation self-contradictory.

“The second cartouche (Figure 2), also found by Vyse, is presented only in his handwritten journal (he didn’t publish this) and has clearly been found somewhere else since it is slightly different from the cartouche in the Great Pyramid; . . .”

“On June 16 (over 3 weeks later) he draws the plain blank disc again from the Chamber (we know this because of the two dots under the snake and also because Vyse writes alongside “in Campbell’s Chamber”).”

Perhaps you could explain this apparent contradiction, as I doubt I’m the only one who finds your presentation hard to follow because of it.

> As for the chronology--Stower typically goes off half-cocked.
> If he had properly read what I have actually written in the
> article, he would have found this (again p.70):
>
>

"Here's the chronology we learn from his diaries. On May
> 27 Vyse inserts into his notes a [Khufu cartouche] with plain
> blank disc. It's there we can see it. On June 16 (3 weeks
> later) he draws the [Khufu cartouche with the] plain blank disc
> again from the chamber...I suspect, however, Vyse placed the
> entire inscription there shortly after entering this
> chamber and later modified the [plain] disc by
> adding the three lines [around 16th June]..."


Again, my apologies for not spotting that you spotted the dates — but then again, your having a grasp of the chronology only makes it all the more odd that you ignore its implications. You’re presenting this as forgery in the planning stage, when the date says that the “quarry mark discovery” episode was all but over. Vyse sent off the last of Hill’s drawings on the 19th. Fin.

But where do you get May 27 from? As far as I can see (have I overlooked it?), you do not present this or argue it in your article. No, we can not see it, until I show it (as I did earlier, here): 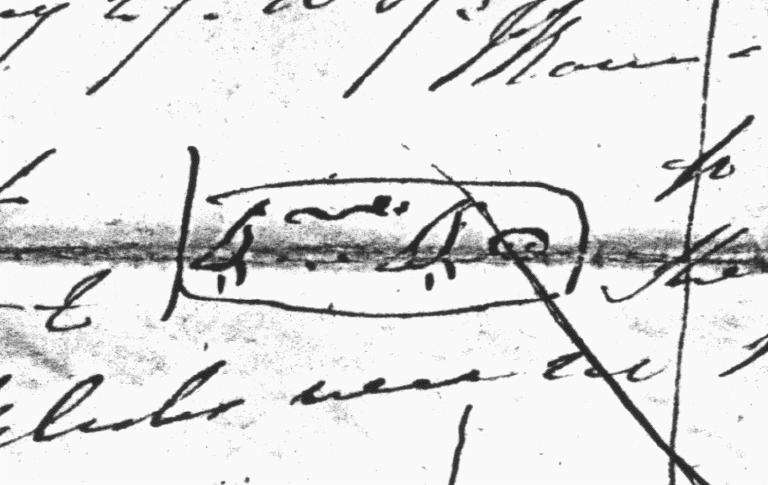 There’s two dots in the circle, Creighton. It’s not (as you allege) a plain blank disc.

> I have not said anywhere that Vyse faked the entire
> inscription, as Stower alleges, on 16/17th June--quite the
> opposite. I clearly say it was done earlier (i.e. around 27th
> May) but with a plain disc (i.e. a disc devoid of the 3 lines)
> and that Vyse added the 3 lines to his earlier entry 3 weeks
> later around 16/17th June and that is what he is deliberating
> on this page before the drawings would be sent off to London 3
> days later (with neither the cartouche or crew name facsimiles
> verified by an independent witness, I might add).

Where do I allege this?

Again, I find this hard to follow, due in part to the self-contradiction noted above — and these elaborate, speculative scenarios are what I was (frankly) mocking in this post. Vyse on the grassy knoll.

"The second cartouche (Figure 2), also found by Vyse, is
> presented only in his handwritten journal (he didn’t publish
> this)..."

>
> I repeat (contrary to Stower's half-cocked slur), this
> cartouche as we observe it in Vyse's journal entry of 16/17th
> June with blank disc and two staff-like glyphs in the crew name
> was NOT published in Vyse's finished book. If Stower can show
> me that specific set of hieroglyphs in Vyse's book then I shall
> happily concede the point.

You really do fixate on those dots, don’t you? Look how Perring (or, strictly, Perring plus lithographer) rendered them. (Do I need to explain how the works relate?)

> That is me for the moment. But I shall hopefully return to this
> when time permits. I am presently writing Part II of this
> article, which will present further evidence from Vyse's
> journal and other sources that clearly show that Vyse and his
> team faked these entries--and if he could fake these
> hieroglyphs in Campbell's Chamber he could have done so in the
> other chambers.
>
> Now, where's my fountain pen?

Try looking where you left your common sense and honesty.