Mysteries :  The Official GrahamHancock.com forums
For serious discussion of the controversies, approaches and enigmas surrounding the origins and development of the human species and of human civilization. (NB: for more ‘out there’ posts we point you in the direction of the ‘Paranormal & Supernatural’ Message Board).
Welcome! Log In• Register
Go to: Forum Home•Board•New Topic•Search
Re: Audrey - How to photoshop a cartouche a la Vyse
Author: eyeofhorus33 ()
Date: June 16, 2014 06:38PM
hi Audrey

I don't want to engage in tit-for-tat or point scoring. I am happy to discuss with you my opinions - I am not so bold (or stupid) to make claims that my opinions are the right ones - but I don't wish to be demeaned in any way simply because I have a different viewpoint.

Might I sincerely suggest you consider learning to read Middle Egyptian and then you'll find out for yourself. It's a rewarding task and you clearly have a passionate interest in the history and ideas about the AE culture!

and here for the Osiride statues: 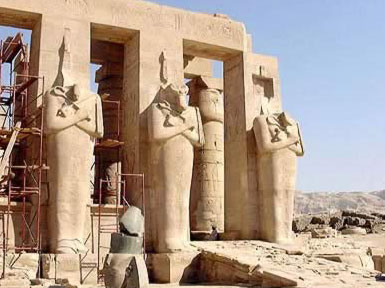 What is your 'interpretation' of the image depicting the mummified form of Osiris being watered, might I ask?

One of the reasons why I view it as a representation of seasonal renewal is the corroboration from other sources, like annual festivals where Osirian seed beds were filled with grain on the first day of the festival which coincided with the date of the annual planting of grain seeds. To my mind, this serves to strengthen the association of Osiris with the annual inundation and their agricultural cycle.

Cladking asked why the PT suggested that Egyptians were not to "tread" on the "oozing corpse" of Osiris, considering this "gobblety gook" as he so often does. I, on the other hand, interpret this to be an instruction not to tread the earth where crop seedlings may be growing as this could cause damage to the crop, failure in the harvest and, consequently, hunger for the masses.

I make no claims to being right, I'm simply sharing with you the way I piece the pieces of this puzzle together for myself.

Scott Creighton discusses it in a similar way here

and I find Scott's take on the 14 scattered pieces Of Osiris' body being represented by pyramids across Egypt quite intriguing. The PT is quite unequivocal about this:

Your point about Plutarch's account of "Isis and Osiris" is correct in the sense that it was written during the first century AD. However, it is the earliest and only surviving, complete account of the myth in a language other than hieroglyphs which, admittedly, are still rightly disputed by academics and posters like Cladking, here on this forum. In the absence of anything else - and with Plutarch being two thousand years older than any Egyptologist - written during the Graeco-Roman period, it is arguably a more reliable source than any 19th, 20th or 21st century Egyptologist's 'interpretation' of the hieroglyphs and references to Osiris in the Pyramid Texts.

Lastly, without wishing to split hairs, the etymology of the word ritual is the Latinate 'ritualis' meaning "relating to rites." I acknowledged that "funerary rites, though variable, are part of the human condition." I agree that rituals are also, by extension, variable but the major and oldest world religions that I cited all practise prayer and believe in the idea of a soul transmigrating to either meet its maker or to begin afresh. I agree that funerary rites can be carried out without certain rituals but the ones I mentioned all share certain features.

As an atheist, it matters little to me and by citing a number of mono- and polytheistic world religions, I am certainly not projecting a familiarity with "Christian custom" onto others' rituals and rites.

EDITED: To amend typo errors, to 'tidy up' a sentence or two and to add images.