Mysteries :  The Official GrahamHancock.com forums
For serious discussion of the controversies, approaches and enigmas surrounding the origins and development of the human species and of human civilization. (NB: for more ‘out there’ posts we point you in the direction of the ‘Paranormal & Supernatural’ Message Board).
Welcome! Log In• Register
Go to: Forum Home•Board•New Topic•Search
Re: 49.5 axial tilt? Really?
Author: carolb ()
Date: November 04, 2012 01:43PM
David L wrote:

> And whomever created that web site is a nut case. I think most
> of us would be dead if the axis tilted that much.
>
> If the axial tilt had changed even one degree, my computerized
> telescope would be way off the mark when I direct to particular
> object in the sky. It's not off--not by a little bit.
>
> Unless you have a wide open view of the horizon, you don't see
> where the sun rises. And make sure you are not using a compass
> to find north. It's way off.
>
> The USNO site is where you go to get the straight scoop:
> [www.usno.navy.mil]

That's true. The writer of that article really doesn’t understand the phenomena he’s talking about. He’s confusing the overhead position of the sun at midday at the summer solstice with the sunrise and sunset points on the horizon.

Because of the earth’s tilt of 23.5 degrees the apparent movement of the sun in the Northern Hemisphere is a giant arc in the sky, tilted towards the south (with the remainder of the circle below the horizon from your point of view). 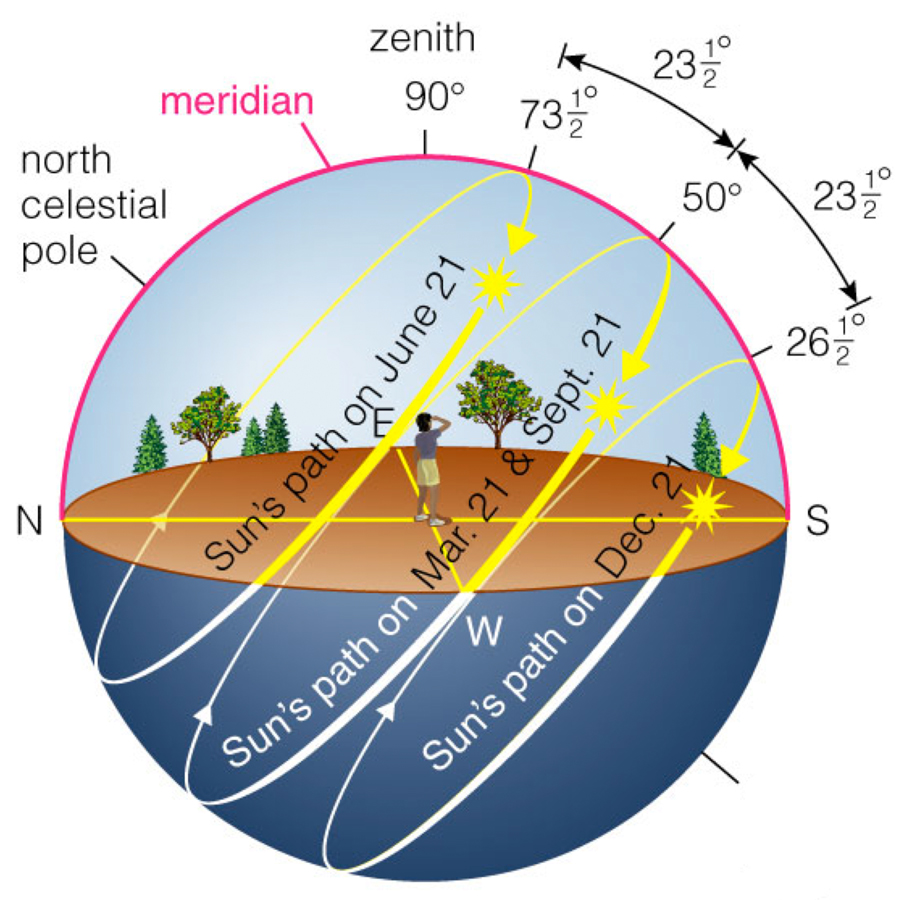 On the Tropic of Cancer, the sun will be overhead at midday on the summer solstice, but that doesn’t mean that the rising and setting points of the sun on the horizon on that day can’t be further north than that. They are, as is obvious from the diagram.

This page gives a clear explanation, with diagrams: