Mysteries :  The Official GrahamHancock.com forums
For serious discussion of the controversies, approaches and enigmas surrounding the origins and development of the human species and of human civilization. (NB: for more ‘out there’ posts we point you in the direction of the ‘Paranormal & Supernatural’ Message Board).
Welcome! Log In• Register
Go to: Forum Home•Board•New Topic•Search
piezoelectric properties
Author: spitfire888 ()
Date: July 24, 2009 02:58PM
The amethyst orb has piezoelectric properties; which I speculate may have been used at the apex of Khufu. I think the Khufu pyramid would charge the amethyst orb. Then some control room from nearby Khufu would direct and focus the energy of the orb to whatever target, like the HARRP project in Alaska. I know that I originally stated that it may have been a photon beam weapon atop of Khufu, but who knows? Khufu may act like HARRP.

The Great Pyramid flows with electrons and amplifies at the apex where the amethyst orb would be. The earth’s electromagnetic dynamo works in concert with Khufu to give it its charge. I also speculate that insulated copper cables ran up the sides of the pyramid to control the Orb of Destiny which would have rested on an iron rod within 1/3 of a bowl shape. I presume the amethyst orb to be 4’ in diameter. An iron rod could lower and raise the amethyst and the capstone would have to allow for an opening and closing effect working in unison from a control room. Finally some mechanism from one of the control rooms would have to be able to turn the orb and sense its charge potential, then focus and release the energy of the amethyst orb from the control rooms via the copper cables on the sides of The Great Pyramid. 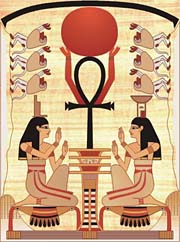