Mysteries :  The Official GrahamHancock.com forums
For serious discussion of the controversies, approaches and enigmas surrounding the origins and development of the human species and of human civilization. (NB: for more ‘out there’ posts we point you in the direction of the ‘Paranormal & Supernatural’ Message Board).
Welcome! Log In• Register
Go to: Forum Home•Board•New Topic•Search
Re: One major problem as I see it ...
Author: Ahatmose ()
Date: August 29, 2007 02:39AM
Hi Richard and THANKS !

Went to Google Earth Pro and centered on Casey and came up with this image ... 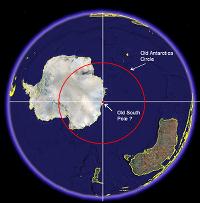 As you pointed out it is possible that the pole could have indeed shifted and Antarctica would still not have to give up possession of The South Pole.

Would be extremely interesting to find out the age of the ice at the furthest end of the Antacrtica closest to South America.

Sure would be weird if the ice here turned out to be between 12,000 and 14,000 years old. Anybody got any statistics or facts from this part of Antarctica ?

But then again where would the Arctic and Antarctia circles be if the Earth was vertical ? Would there even be one or would they be at the Equator along with The Tropics of Cancer and Capricorn. Would these exist ? Hurting my brain too much to try to figure it out and visualize it