Mysteries :  The Official GrahamHancock.com forums
For serious discussion of the controversies, approaches and enigmas surrounding the origins and development of the human species and of human civilization. (NB: for more ‘out there’ posts we point you in the direction of the ‘Paranormal & Supernatural’ Message Board).
Welcome! Log In• Register
Go to: Forum Home•Board•New Topic•Search
New OCT
Author: Jim Alison ()
Date: March 22, 2003 12:38AM
Hi all,

I just got back in town and I found that Hera had sent me an email last week requesting that I post a summary of Graham Chase's new OCT for discussion here.

About 3-4 weeks ago GC announced that he had found that the angular dimensions of the celestial triangle formed by Sirius-Rigel-Betelgeuse were the same as the terrestrial triangle formed by Heliopolis-Abu Roash-Abu Sir. Just as the line from Rigel to Betelgeuse crosses in between Al Nilam and Mintaka, the line from Abu Roash to Abu Sir crosses in between Khafre and Menkaure. Lehner suggested in TCP that the SE corners of the Gizamids pointed at Heliopolis and in "The Pyramids" Verner reaffirmed that suggestion and also suggested that the NW corners of the pyramids at Abu Sir also point to Heliopolis.

Chris Tedder measured the angles of the celestial triangle and got the following results: Sirius - 43.34 degrees; Rigel - 74.66 degrees; Betelgeuse - 62 degrees. I measured the terrestrial triangle using the Baines and Malek map that shows the locations of the Abu Roach pyramid, the Abu Sir pyramids and the Oblisk at Heliopolis. I got the following results: Heliopolis - 43.4 degrees; Abu Roash - 75.3 degrees; Abu Sir - 61.3 degrees. Here is a small jpg with the triangle superimposed on the B and M map: 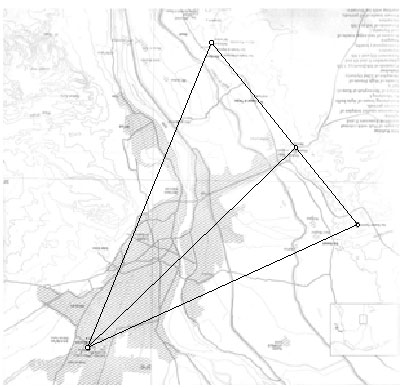 I based my measurements on the middle pyramid at Abu Sir although GC is basing his findings on Suhare's pyramid at Abu Sir. Since Suhare is on the line from the middle pyramid at Abu Sir towards Heliopolis, using Suhare would not change the angle for Heliopolis but the Abu Sir angle would be slightly larger and the Abu Roash angle slightly smaller, making just about a perfect match for the angular dimensions of Sirius-Rigel-Betelgeuse. If all three angles are the same for both triangles, then the relative distances between the points must also be equal.

In an article on RB's website, Chris Tedder showed that the line from Abu Roash to Abu Sir also crossed over the pyramids at Zawyet el-Aryan. He found that this line is at an angle of 52.2 degrees south of due east. Here is his article:

This is interesting because the angle from the apex of Khufu to the apex of Menkaure is 52.2 degrees south of due west. However, Chris uses the westernmost pyramid at Abu Sir for his measurement. Using Suhare reduces the angle to very nearly 51.85 degrees, which is the same angle as the slope of Khufu. In addition to crossing over the pyramids at Zawyet el-Aryan, the line from Abu Roash to Abu Sir also crosses over the sun temples of Nuserre and Userkaf. Based on Lehner's map of the pyramid fields in TCP (which goes further south than the B and M map) it also appears that this line as extended also crosses over the line of archaic mastabas just west of archaic Memphis, as well as crossing over the main ruin field of ancient Memphis itself.

Around August 12, 2500 bc at around 4:00 a.m. Orion was in the SE sky with the angle of Rigel to Betelgeuse above the horizon matching the angle of Abu Roash to Abu Sir south of due east (around 52 deg). At that time a sight line could be drawn from Abu Roash through Abu Sir, across the horizon and up into the sky through Rigel and Betelgeuse:

One objection that GC addressed is the fact that the Gizamids are about three times smaller or three times closer together than they would need to be to be scaled correctly in relation to Heliopolis-Abu Roash-Abu Sir as Orion's belt is to Sirius-Rigel-Betelgeuse. GC takes the position that this was due to the size of the Giza Plateau, resource limitations or other considerations, but otherwise the angles and positions of the pyramids are an almost perfect match.