> All of the ramp talk is quite stupid. The DE used
> ramps, they had a word for ramp, and as noted many
> times before there are not only several
> contemporary examples of ramps found in the OK,
> including Giza, but also after the fact. The
> question is did they use ramps to build pyramids
> which the answer is most certainly yes and no.

The word "ramp" is unattested from the great pyramid building age. The implications of this are broad and staggering. there could hardly have been elaborate soaring 480' tall ramping systems that had to be built, rebuilt, and rerebuilt over and over to build towers and convert them to steps and then to smooth sided pyramids. Were such a thing possible they'd have had a dozen Gods for them and hundreds of thousands of ramp builders, designers, draggers, and overseers. Tens of thousands of Egyptians would have died on ramps from crushing, falling, and heat stroke. They would have needed two or three more builders villages to house the stone draggers and one to house the army of men who dragged warm muddy water from the river.

No, there is a total vacuum of attestation for ramps and even the word "ramp". We are left to discover how these were built on our own. It seems many of us have pieces of the puzzle but they just don't seem to fit together because at every turn there is missing evidence caused by time or the refusal of modern day Egyptologists to test and measure the pyramids.

> It is also highly likely ramps were used for
> the first several courses, probably multiple ramps
> at a time. This is where it goes to shit which
> most agree other methods were required with ramp
> designs beyond this point speculative at best.

The first few courses are irrelevant. Even building 80' tall ramps is quite easy so the first 80' is irrelevant. But 80' defines a mastaba NOT A 480' PYRAMID.

> I note that the
> core of every exposed pyramid had some form of
> stepped core in which the outer true pyramid layer
> was added after the fact.

Are you suggesting then the this tower was somehow part of a lifting device?

> Whatever ideas one wants to dream up regarding
> pyrmaid building it has to include both: building
> a vertical stepped tower core then building the
> horizontal true pyramid layer.

Perhaps the tower core served some other function like providing structural integrity and/ or it was built concurrently with the steps because this was far easier.

> You have to solve for this first:
> 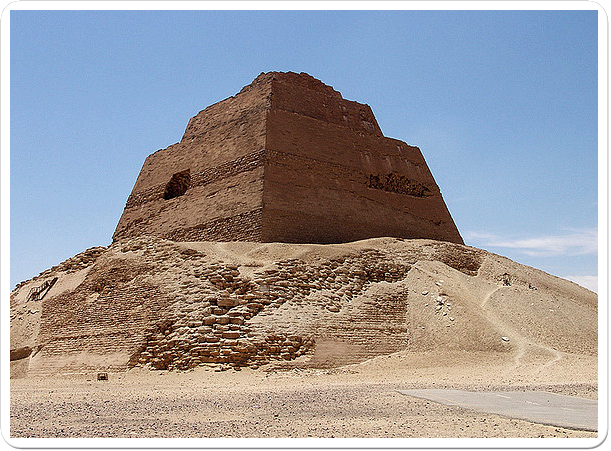 And this is where Egyptology fails. They want to fixate on the wrong things and specifically they want to fixate on Djoser's Pyramid as though it is the be all end all of the "transition from mastaba to pyramid". Nonsense. All of the evidence must be taken into account and Meidum provides many clues about many things. But one thing it does not do is show it or any great pyramid needed ramps for its construction.

More likely every great pyramid employed the same techniques for building. Stones were pulled up five step pyramids one step at a time as a more inner core was made which relieved much of the stress from the weight of the steps and smoothed sides. This is the most likely scenario with the scant data we have available. Until such time as Egyptology provides Peers et al the data required to solve this then, I believe, this is state of the art. It not only fits the little data we have but it is in keeping with logic and the actual "cultural context" including the evolution of pyramids and the exposed core of Meidum.