Mysteries :  The Official GrahamHancock.com forums
For serious discussion of the controversies, approaches and enigmas surrounding the origins and development of the human species and of human civilization. (NB: for more ‘out there’ posts we point you in the direction of the ‘Paranormal & Supernatural’ Message Board).
Welcome! Log In• Register
Go to: Forum Home•Board•New Topic•Search
Re: Limestone vs Limestone
Author: Barbelo ()
Date: January 11, 2020 05:25AM

Quote
The Saksaywaman construction material is evidently represented by the organogenic and fine-grained limestone with no organic residues and with a low amount of their fragments.

ITAG experts suggest that the fine-grained limestone may be an artificial material produced with unknown technologies. This statement is presented in the official summary.

On the other hand, the experts of Fersman Mineralogical Museum in Moscow, of the Geology Department of St-Petersburg State University and of the Department of Geology of Oil and Gas of the South Federal University have expressed their opinion during the private consultations that the mentioned fine-grained limestone is deemed to be a natural formation.

Have you watched Berdnikov and his associates discuss this issue? [www.youtube.com]


So, Berdnikov cannot explain how the Sacsayhuaman stones can possibly be in their present composition without the interference of some lost technology. Yet, three experts in the field state that these stones are natural.

YOU don't need to be an expert in these matters. Even renowned experts disagree with the process of formation.

Tufa isn't a widespread construction material. Because of its lightness, low density when wet and its ability to harden to stone upon drying makes it the low-hanging fruit of options. Much easier than quarrying, transporting, cutting and lifting sedimentary limestone. Even in England, at Canterbury Cathedral some may have been imported from France due to its scarcity.

This tufa is different from most varieties found today as it borders on travertine and its dependent on the chemical quality of the water. But, that's not all.

Quote
From limestone, which became plastic, due to the application to it of an unknown technology by the ancient builders, which deliberately violated the crystal structure of the natural mineral with the goal of providing the building material with maximal density?

Using that premise, they'll never figure it out.

Think logically. If there was some unknown technology used, why did the ancients go to all the trouble of creating the irregular shapes? Why not just form up regular moulds and pour in the mix? What's the purpose of the walls?

Look at the regular andesite blocks. Were they harder, or easier, to make? Pre or post the limestone wall blocks?

No one was "deliberately violating the crystal structure of the natural mineral with the goal of providing the building material with maximal density."

Is that really possible for people of that time? Or even our time? Why bother? Why not just hack the sedimentary limestone out of the quarry, cut it into blocks and stack them up make a wall. Isn't that standard modus operandi at Giza?

The ancients were simply using local, but not common, stone.

"From limestone, which became plastic..."

Quote
Yes we can all see the channels for water at Tombomachay, but it would take millennia, or a long time, to form and unlikely in that structural shape? ( Unless you think the original structures are extremely old)

I'm not sure whether, or not, I have explained this clearly, but the walls at the Water Temple at Tombomchay are not something that were discovered as is. They were built using local stones which had formed into the irregular but close-fitting formations. Most of these stones were removed from their original position, trimmed and repositioned into walls.

However, the central mass which runs down the hill was left in situ as a host for further creation of more living stones. Or, because it was deemed to be a sacred entity. Maybe the whole site is the reason for the Temple.

Now, the wonderful research paper with images which you so kindly linked to, made the following observation:

Quote
The surface is covered with certain impurities, dust and current organics (Fig. 3); particles of copper were also found (Fig. 1, 2):

And, as far as the time it takes for formation doesn't really matter, it was used when it had formed sufficiently enough to be used for construction.

Do I think that Sacsayhuaman is extremely old? Maybe - if those andesite blocks precede the limestone ones. But, below is an image of limestone construction from Malta. Does the one on the left look as though it was once soft to you? How old do you think that they might be? Older than Sacsayhuaman? 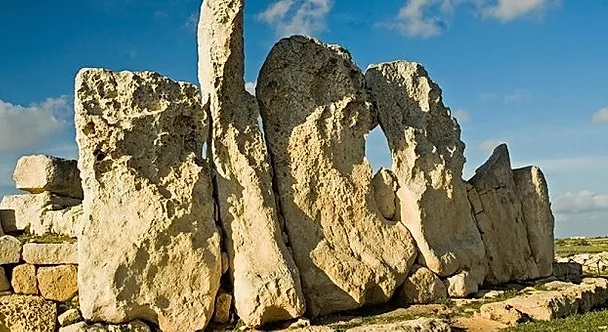 As I said, at the beginning, there is a lot more to this site than has been adequately explained. But, my concept of what happened not just here, but everywhere this type of stonework exists, won't gel with mainstreamers or alternatives.