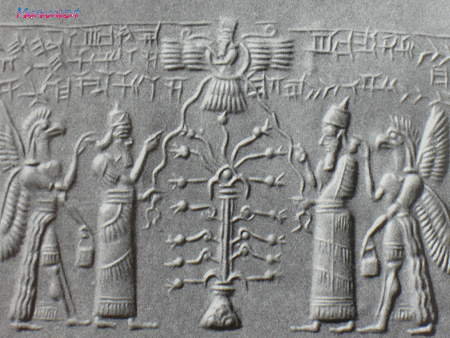 This is an Assyrian interpretation from the 9th century BC.

I think it is arguable this is what it represents, and supposedly others of the like were found, but this example from the Halaf Domuztepe site, Anatolia c. 5,500BC is considered by some to be the oldest examples depicted: As an aside we would note the multistory buildings and identical flamingo motif also found on Naqada II and greater Mesopotamian pottery detailed beginning HERE. *Sigh*.

Anyhoo, if trying to ferret out its identity from pictorial examples alone, I would humbly suggest trying to find the earlier Mesopotamian (or other) examples as the farther forward in time it seems representations become more highly stylized which may give an impression beyond its original intent.