Mysteries :  The Official GrahamHancock.com forums
For serious discussion of the controversies, approaches and enigmas surrounding the origins and development of the human species and of human civilization. (NB: for more ‘out there’ posts we point you in the direction of the ‘Paranormal & Supernatural’ Message Board).
Welcome! Log In• Register
Go to: Forum Home•Board•New Topic•Search
Re: Khufu and the Great Pyramid
Author: Martin Stower ()
Date: October 14, 2019 06:21PM
Open mind Wrote:
-------------------------------------------------------
> From what I read about Herodotus, I didn't get the
> impression he'd have any idea about the
> distinction between original inhabitants and
> occupiers. It sounded more like he inquired and
> reported. Its even less likely that a recently
> conquered people might go out on a limb for an
> inquiring representative of the conquering press
> to expose the possibility that as well as being a
> conquered people, they also might not actually
> have any claim to being the builders of the
> greatest architectural achievements man had ever
> seen to date, and worse yet, had no idea who it
> was that built those pyramids either. Unless they
> were gluttons for humiliation and self
> deprication.

A murky speculation about motives.

What Herodotus reported is what a literate ancient Egyptian would have inferred from the many inscriptions at Giza which include (with small variations) this sequence:

—indicating the holding of offices in the pyramid complex so named, including priesthood in Khufu’s funerary cult. We also find indications of a familial connection with Khufu.

This one (from the temple or causeway) would have been in better condition at the time: 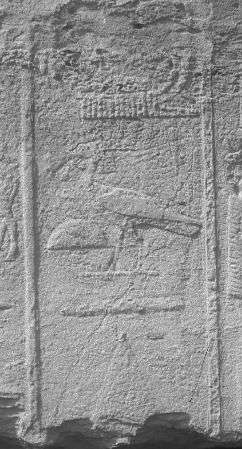 For a long time it was only from the account of Herodotus that the existence of such reliefs was known—and then its general correctness in this respect was corroborated by the discovery of such fragmentary remains as the above.

Consistency of sources, as I mentioned earlier.