Mysteries :  The Official GrahamHancock.com forums
For serious discussion of the controversies, approaches and enigmas surrounding the origins and development of the human species and of human civilization. (NB: for more ‘out there’ posts we point you in the direction of the ‘Paranormal & Supernatural’ Message Board).
Welcome! Log In• Register
Go to: Forum Home•Board•New Topic•Search
Re: Megaliths: A Circumferential Unit and the Division of the Megalithic Yard
Author: gjb ()
Date: September 07, 2019 12:26AM
molder Wrote:
-------------------------------------------------------
>
> For some reason I thought you had read this.
>

I hadn’t seen the paper, thanks for the link.

It may be noted that the Nebra Disk, with a diameter of 32cm, has a circumference of three Northern Feet, potentially with a megalithic yard of 336mm. It so happens that such a diametric and corresponding perimetric unit fit the stone circle site at Boitin, Mecklenburg. Here, the distances between the circles are in the diametric unit (a whole number of megalithic yards), and the gaps between the stones are in the perimetric unit (half a Northern Foot).

The same phenomenon can be seen at Balnuaran of Clava, where the megalithic yard would be 84cm (33 inches) and the perimetric unit would thus be 165mm (6.5 inches). 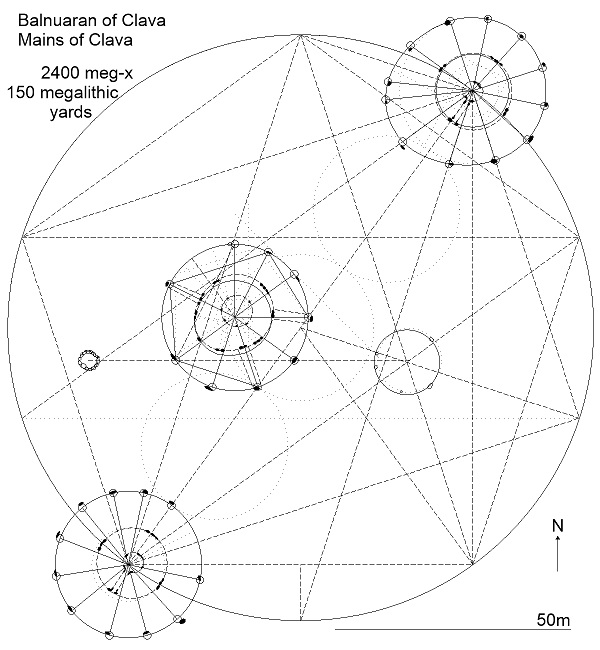 The numbers in the gaps are their size in perimetric units and total 600 reflecting a division of the megalithic yard into 16 equal parts. Note that we would express the gaps as: 20 units = 12 degrees, 30 units = 18 degrees, 45 units = 27 degrees, 50 units = 30 degrees and 60 units = 36 degrees. The gaps at most stone circles divide similarly as rational fractions of a revolution, frequently in multiples of 6 and 7.5 degrees..

Both here and at Boitin the predominant angle is 36 degrees - one tenth of a revolution. The bearing of the passages is taken to be 216 degrees. I postulate that the axes of all stone circles are a rational fraction of a revolution from one of the four cardinal points of the compass. As such, the axis always complements the gaps (here, all are multiples of three degrees, which is to say multiples of five perimetric units).

Sadly, nobody is prepared to consider that the megalith builders could have been this savvy!