Mysteries :  The Official GrahamHancock.com forums
For serious discussion of the controversies, approaches and enigmas surrounding the origins and development of the human species and of human civilization. (NB: for more ‘out there’ posts we point you in the direction of the ‘Paranormal & Supernatural’ Message Board).
Welcome! Log In• Register
Go to: Forum Home•Board•New Topic•Search
Megaliths: A Circumferential Unit and the Division of the Megalithic Yard
Author: gjb ()
Date: August 29, 2019 06:17PM
The argument for the subdivision of the megalithic yard can be much simplified, as follows.

It goes without saying that every circle with an integer number of metres on the circumference will have that same number of an apparent unit of 1m/pi (318.3mm) on the diameter. 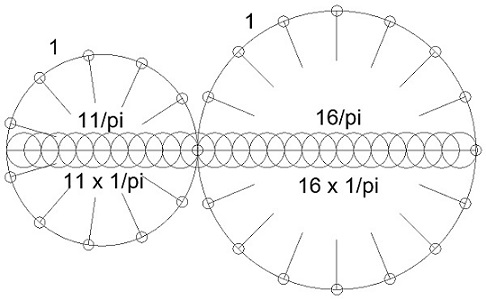 In the same way, any circle having an integer number of units with a length of 2.6m on the circumference will have that same number of Thom’s megalithic yard (829mm) on the diameter.

Such a circumferential unit of 2.6m might be appropriate for large circles but would be totally unsuited to small circles and would thus be ideally subdivided. The likely number of divisions can be deduced logically from a subset of well defined stone circles.

Machrie Moor V on the Isle of Arran, Scotland, has two concentric circles both with diameters in megalithic yards. The ratio between them is, perhaps significantly, 14:22 with the inner circle having eight equal divisions. The diameter of this circle would be 112 derived diametric units and the circumference would thus be 8 x 14 corresponding perimetric units.

However, assuming that the outer circle uses the same unit of measure results in there being a half unit on this circumference, suggesting that the megalithic yard is, in fact, divided into 16 units of 51.8mm (2.04 inches) with a corresponding perimetric unit of 162.8mm (6.4 inches). Analysis of stone circles further afield, including Ireland, bears this out.

The existence of such a perimetric unit is supported by the circles at Stennes (37.5MY diameter) and Balbirnie (17.5MY), in Scotland. The excavation reports suggest that these are not properly equally divided, but it can be appreciated that at each there was a potential tallying error in a multiple of the suggested perimetric unit. At Stennes, the gaps are in multiples of ten units, at Balbirnie they are in multiples of four. 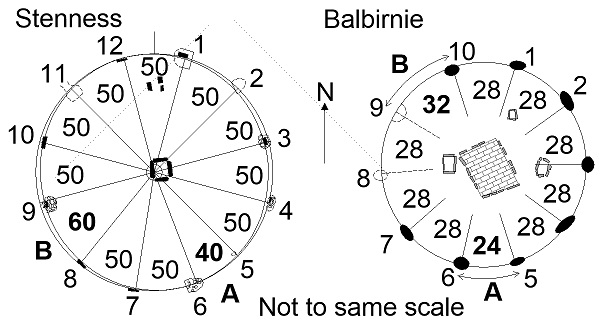 If it be assumed that the system used at the Aubrey Ring (and also across Scotland, as above) was used at the Sarsen Circle, despite the huge difference in ages, then each of the thirty arcs formed by the lintels would be an integer number of units. However, none of the three obvious circumferences (inner, middle, outer) has a diameter in megalithic yards.

Nonetheless, it so happens that the inner circumference of the Sarsen Circle is 1800 diametric units of 51.8mm, one-sixteenth of a megalithic yard, meaning that each lintel has an inner curve of 60 such units - presumable they were cut from blocks of about 64 units by 22 units, making the effective depth about 20 units (1m).

Analysis of over 100 stone circles with acceptable archaeology suggests that Thom’s megalithic yard (and the assumed corresponding perimetric unit) varies by about 2% either side of the mean (829mm), far greater than Thom claimed.

Over 300 circles were surveyed, divided into three groups based on confidence levels (high, medium, low). The distribution of diameters is negatively skewed, and Scotland and Ireland may very well be bi-modal