Mysteries :  The Official GrahamHancock.com forums
For serious discussion of the controversies, approaches and enigmas surrounding the origins and development of the human species and of human civilization. (NB: for more ‘out there’ posts we point you in the direction of the ‘Paranormal & Supernatural’ Message Board).
Welcome! Log In• Register
Go to: Forum Home•Board•New Topic•Search
Why Can’t Creighton Tell the Truth?
Author: Martin Stower ()
Date: February 27, 2019 08:07PM
Scott Creighton Wrote:
-------------------------------------------------------
> A quick perusal of Martin Stower's & Jean Coburn's
> recent publication (The Strange Journey of
> Humphries Brewer: Witness to a Forgery in the
> Great Pyramid? Part 1: Investigating the
> Legend
states that Vyse’ private field notes
> are unreadable and, as such, appear to have been
> discarded by them as evidence in their historical
> pursuit of the personage of Humphries Brewer. (I
> haven't read the full work so perhaps they will
> appear later).

Having read (in preview) no more than the Preface, Creighton commences his predictable pack of lies.

The Preface presents a condensed summary of many years of research. Close attention to tense is suggested. How things looked on first viewing the journal, in 1998 (many years before you did, Creighton) is not the same as how they look now.

Need I remind you of your many statements (some of them in print) about how bad the writing in the journal is? This single example is from The Secret Chamber of Osiris, p. 116:

“Vyse’s handwriting is almost impossible to read; a scrawling style where many letters are contracted or expanded and where a particular letter can take a different form depending on where it appears in a word. I had experienced doctors’ prescriptions that were easier to read.”

Remember your long list of helpers in (supposedly) deciphering a single sentence? Family, friends, colleagues and two unnamed “handwriting experts” from (we learn from the Acknowledgements) the Archive Department of the Mitchell Library? Allow me to remind you, if you have “forgotten”. 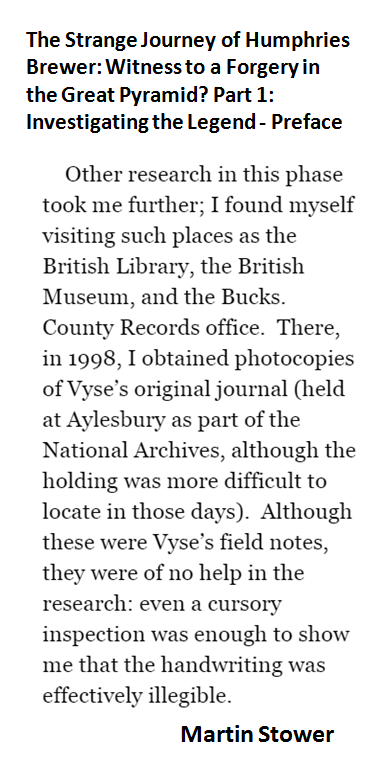 “Although these were Vyse’s field notes, they were of no help in the research: even a cursory inspection was enough to show me that the handwriting was effectively illegible.”

See the trick here? My past tense has been turned into a present tense, passing off my report of past events and impressions as a present opinion. Anyone who’s been following and has seen my transcription of parts of the journal knows that this is a flat-out lie.

And Creighton, the “man” who wrote “Vyse’s handwriting is almost impossible to read” is in no position to complain.

> This is not so. As Stower must know, with time and
> patience, Vyse's private notes can be transcribed
> reasonably well and, at least, to the point where
> we can understand very well what Vyse is meaning.
> This example is from the moment Col Vyse first
> entered Campbell's Chamber of the Great Pyramid.
> While some words are uncertain and a couple
> unknown (in red), the meaning is fairly clear. He
> is describing in this transcription the state of
> the chamber as he first enters it: 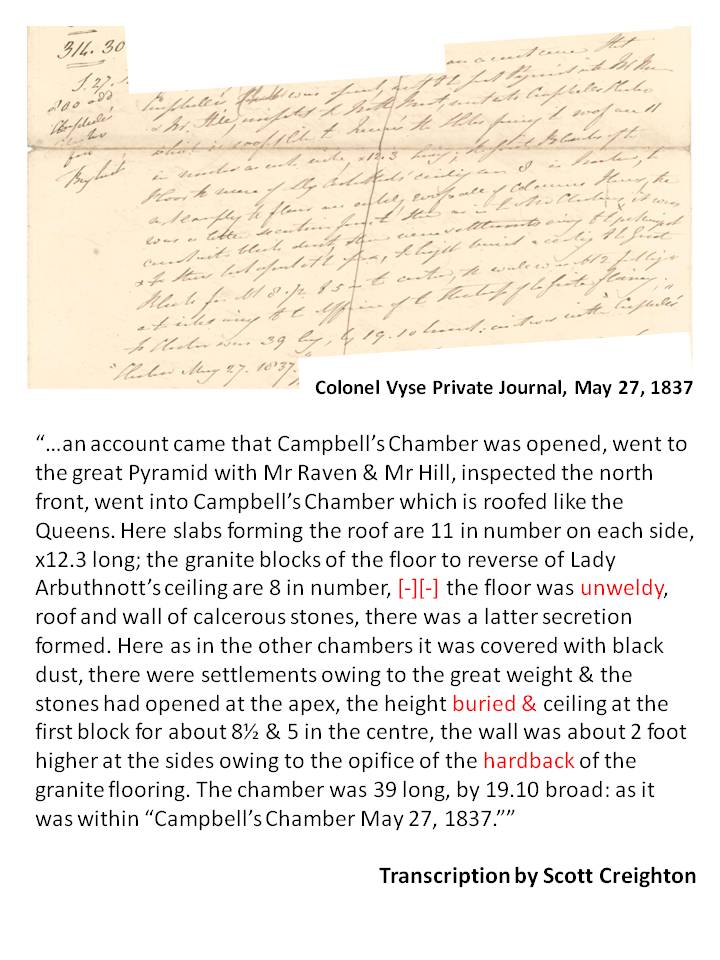 Says you. Allow me to help you with that last bit:

Here, in the comments:

> As stated there are a few uncertain words and two
> (or perhaps just one) unknown word. I think I have
> done a reasonably good job of transcribing a page
> from Vyse's private notes (and a number of others)
> that Mr Stower discards as "effectively
> illegible". Well, it's clearly not if one puts in
> the time.

Which, as we see, is a lie. In truth I have reason to suspect that Creighton has cribbed my stuff on (a) the Vyse journal and (b) the Allen logbook and passed it off as all his own work.

> And while we're looking at this segment from
> Vyse's private notes, the reader might wonder why
> Vyse describes all aspects of the chamber, signs
> it off but makes no mention of finding any painted
> quarry marks on the walls or roof blocks
> before signing it off? Especially so when
> his published account tells us that he
> found the quarry marks during this visit.

On which prevarication we need only read my transcription above.

At this point self-censoring.