Mysteries :  The Official GrahamHancock.com forums
For serious discussion of the controversies, approaches and enigmas surrounding the origins and development of the human species and of human civilization. (NB: for more ‘out there’ posts we point you in the direction of the ‘Paranormal & Supernatural’ Message Board).
Welcome! Log In• Register
Go to: Forum Home•Board•New Topic•Search
Re: Great Circles and Small Circles and Easter Island
Author: Dr. Troglodyte ()
Date: May 19, 2019 05:07PM
Hello MDaines; you wrote: ”We are not actually discussing a line created by three points of location. The whole interest of the Great Pyramid eastern façade boat pit is that it is not a point but an oblong, a lengthwise shape that allows, in the same way as an arrow or a road sign, to point towards another place. In this particular case, the 3rd boat pit can be said to point at Easter Island after passing through Nazca. If turned in a slightly different direction, it would no doubt have pointed elsewhere and probably proved a disappointment on that score.

Of course, I can’t vouch for any of the above but the direction of the boat pit with regard to Easter Island seems pretty sure thanks to Google Earth.”

It is unclear as to what data was applied to Google Earth to reach the conclusion that the axis of Khufu’s Causeway Boat Pit points toward Easter Island ”in the same way as an arrow or a road sign”.

Ostensibly, this information is based on figures contained in a previous Post above stating:

”The 3rd boat pit centreline has a heading of 75.75 degrees.

Follow that bearing around the globe using the line tool in Google Earth and you will run through/on EASTER ISLAND at a distance of 16170 Kilometers.”


Utilizing an online bearing and distance calculator, the following assumed details were applied: 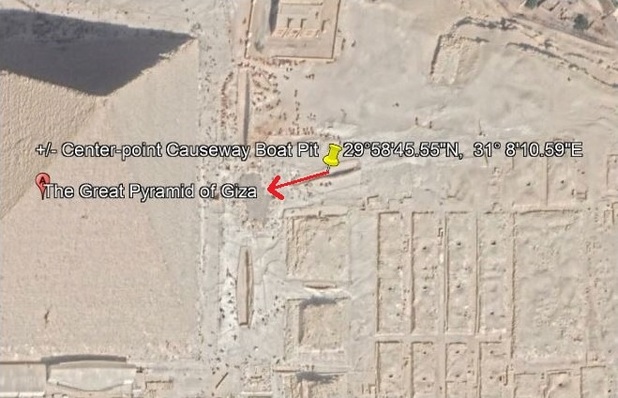 The South Pacific location is +/- 1,215 km north-northwest of Easter Island.

The sum and substance of the claim is unproven. The stated Azimuth/Bearing does not point to Easter Island, or “Nazca” (whatever that may mean).