Mysteries :  The Official GrahamHancock.com forums
For serious discussion of the controversies, approaches and enigmas surrounding the origins and development of the human species and of human civilization. (NB: for more ‘out there’ posts we point you in the direction of the ‘Paranormal & Supernatural’ Message Board).
Welcome! Log In• Register
Go to: Forum Home•Board•New Topic•Search
Re: Midpoint Sunrise-Sunset
Author: Dr. Troglodyte ()
Date: March 12, 2019 12:17AM
MDaines Wrote:
-------------------------------------------------------
> Dr Trogolodyte writes “With specifics to our
> discussion, I updated the image relating the three
> (3) Causeways and their modern Gregorian dates.
> Note that the 18APR date for Khufu’s Causeway
> has been amended to 21APR/22AUG.
>
> Regarding your query: ”Has anyone checked to see
> where that orientation might place the origin of
> the ship….if it arrived across ground from the
> east!”; in a manner of speaking, the funeral
> barge transported the King from the east (land of
> the living) to the west (land of the dead).
>
> It should now be clear that the three (3) Giza
> Pyramid Causeways align with significant solar
> phenomena. Khufu’s Causeway is aligned with the
> midpoint between the June Solstice and the
> March/September Equinox sunrises, as observed from
> the threshold of his Pyramid Temple. A lesser
> known phenomenon of Khufu’s Pyramid is its
> function as a gnomon. For approximately fifteen
> (15) seconds, at sunset on the day of the midpoint
> between the equinoxes and the solstices, a pair of
> triangular shadows appears on either the north or
> south face, heralding the event. Below is the
> occurrence during an April or August event:”
>
>
> I see that now there are two dates for the Great
> Pyramid causeway’s solar events. But, as with
> the first, I still don't see why those dates are
> of such significance unless they correspond to an
> annual flood or some such seasonal event.

Quick points: the ‘modern’ reference dates have no bearing relative to the Ancient Egyptians’ observations; the royal surveyors relied on ‘naked eye’ solar rising and setting sightings along the horizons; the stellar helical rising of Sirius signaled the Nile inundation.


I
> understand that to find significant dates for the
> other two causeways is supposed to reinforce the
> solar theory for the first.


The ‘cross-quarter’ midpoints are emulated in the orientation of the primary Giza Causeways.


The effects of Earth’s celestial mechanics cause the lengths of days to fluctuate. During the solstices, apparent solar time moves more quickly than when nearing the equinoxes. There are more days between the equinoxes and the June solstice than between the equinoxes and the December solstice, therefore the cross-quarter midpoints minutely differ, anglelary. A Solar/Lunar ephemeris was used to determine the azimuthal angles as observed from the threshold of the Pyramid Temple, and are reflected in the ’greater than’ arithmetic mean of 13.675° “north of east”, and the ’less than’ of this mean “south of east”. These variances are an artifact of the “equation of time”.


- while the
> Menkaure pyramid has a straight east causeway
> (which, in my book, rules it out as participant in
> the solar link theory since that is the most
> logical direction for any causeway to take in the
> circumstance.)
>


The Menkaure Causeway is aligned with ‘solar’ equinoxes, or the midpoint between the solstices. 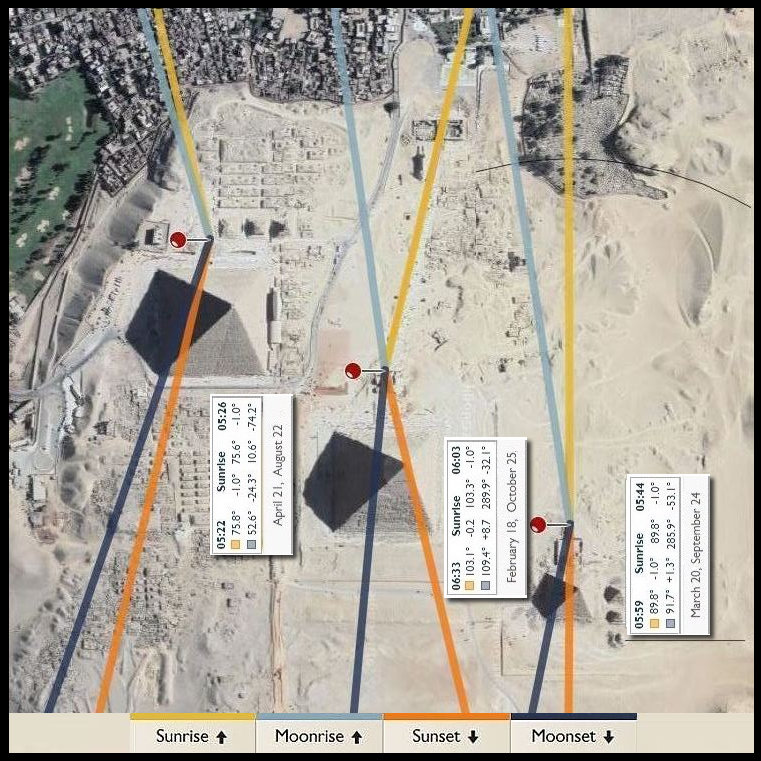 > Regarding my query, yes, I’m aware of the
> Egyptian lore concerning the cosmic ship. My own
> understanding is that it relates to spiritual
> journeys and to the 'carriage of the sun', the
> 'solar barge' known in other mythologies but that
> doesn’t obviate the journeys of the dead –
> whoever they may be. My question was and still is
> a more practical one based on the obvious visual
> impact of the three easterly boat pits, and the
> conviction that this might be an overlooked
> message built into the architecture of the place.
>
>


> Spiros has come up with an intriguing result from
> the ancient Greek numeral system: showing that
> ‘one ship’ corresponds to 365. It seems a pity
> that no-one has a reliable diagram: a straight
> line from the coordinates of that causeway boat
> pit that would either confirm or refute the
> possibility that it leads to a significant place,
> one that could be linked to the history of Giza.
> Or perhaps leave us none the wiser!
>
> Madeleine


Given the above evidence, I maintain the supposition that the Causeways originate ‘from the east’, rather than ‘toward the east’.