Mysteries :  The Official GrahamHancock.com forums
For serious discussion of the controversies, approaches and enigmas surrounding the origins and development of the human species and of human civilization. (NB: for more ‘out there’ posts we point you in the direction of the ‘Paranormal & Supernatural’ Message Board).
Welcome! Log In• Register
Go to: Forum Home•Board•New Topic•Search
A Big Ask
Author: Dr. Troglodyte ()
Date: February 26, 2019 01:27AM
Hello MDaines; you wrote: ”The three oblong boat pits that lie to the east of the Great Pyramid don’t appear to be of the same manufacture as the others, possibly with a different time frame...?

Has anyone looked into the importance that those pits and their position might have had - perhaps from the point of view of measurement - in relation to the pyramid(s)? Has anyone attempted to relate, decode, understand them, or know if there any writings that include mention of them?”

This Topic is far more complex than it may appear; where to begin?

There are approximately 70-80 [?] known pits (mud-brick and/or stone) associated with burials; fifteen (15), or sixteen (16) of these are located at the Giza Complex. The orientations of the various finds fluctuate from the cardinal points to numerous relative bearings. 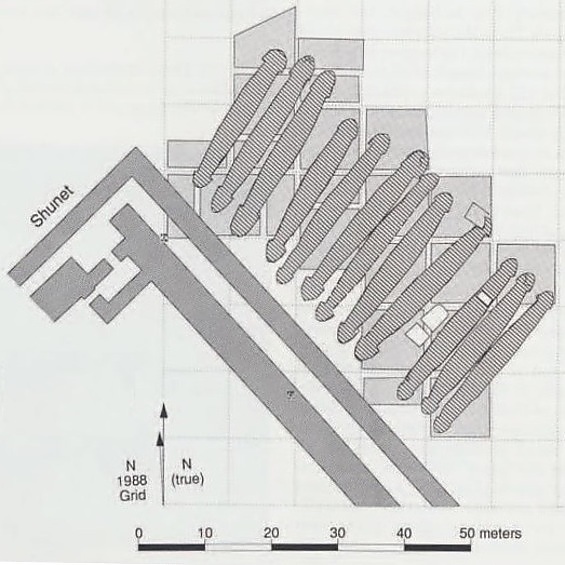 Boat and human burial associations, related to ‘proto-pyramid’ mastabas, are known from the First Dynasty. Initially, the “pits” were fashioned from mud bricks following the profile of the vessel, which were filled with bricks and sand, then mounded over.

There are five (5) “oblong boat pits that lie to the east of the Great Pyramid”, plus the two (2) rectangular pits to the south. As to their age, likely [?] contemporary with G1’s construction given their relationships to the Causeway, Khufu’s Pyramid and Mortuary Temple, Queen Hetepheres I’s Pyramid (G1a), and the Ka Pyramid (G1d); the two (2) southern pits would reasonably have been sealed shortly after Khufu’s internment.

Additionally, Khafre’s Giza complex also has seven rock cut pits, Queen Khentkaus I's complex contains one (1), possibly two (2) pits. No boat pits are known to be associated with Menkaure; however, Djedefre has one (1) at Abu Rawash.