Wow! Thank you for the correction. (I was sorta expecting something else;-)

So we can dismiss :
the 7 blocks with king’s Horus name, Medjedu (Hr-mDdw) as no one even recognised it as a word then no serekh etc
The 10 blocks with king’s full name, Khnum-Khuf (Xnmw-xwf) as as far as I know Vyse notes don't pour over who he was or how to properly spell his name?

That just leaves 2 : king’s abbreviated name, Khufu (xwfw)
One that is partial and some claim can be seen to extend into deep cracks between the massive floor slab.

^None of them could have been faked or forged. So that leaves :-

The other , has this unrecognised Aper symbol as the start end to the phyle name.

Far from a crook, SC is making this Vyse fellow a quiet achieving genius who, despite S Birch, J G Wilkinson, I Rosellini , K Lepsius and before the great JF Champollion, had not worked out the symbol (if it hd been even found) ….. but somehow Col Vyse calmly read his "secret cache of documents" and thought I know, that one is what I'll tell the other chaps to copy and we will get away with it because no one else can read it.!!! LOL!

Risking all, that it might later be discovered as an irrelevant inconsistent addition?

I don't think so, and those who do are crazy!

There was an amulet version 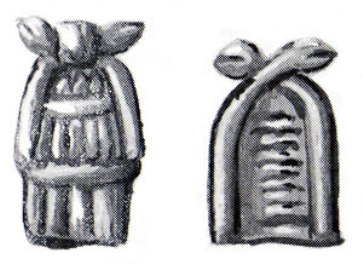 I think thought to be NK? but I believe I read somewhere it had been found. No matter.


So, whilst Warwick and I LOL! and declare HOAX dead.... I see the funeral had been held long, long ago, I wonder why SC didn't attend? Too busy on radio or hiding under his bed?