Mysteries :  The Official GrahamHancock.com forums
For serious discussion of the controversies, approaches and enigmas surrounding the origins and development of the human species and of human civilization. (NB: for more ‘out there’ posts we point you in the direction of the ‘Paranormal & Supernatural’ Message Board).
Welcome! Log In• Register
Go to: Forum Home•Board•New Topic•Search
Megalithic Unit: Meayll, Isle of Man
Author: gjb ()
Date: February 01, 2019 06:56PM
I have suggested that the megalithic yard, where it appears on the diameters of stone circles, might be a consequence of a unit actually on the circumference, this unit being a fraction of 1MY x pi = 2.6m.

I have already provided many examples, but I was struck recently by the details of a survey of Meayll (Mull) on the Isle of Man. The site is not technically a stone circle, but Burl includes it in his compendium of sites because he considers it sufficiently significant.

Of course, Burl would never admit to the possibility that there might be a system of measurement present at the site that is common to all stone circles, specifically that a unit present at the Aubrey Ring is also present at Meayll. 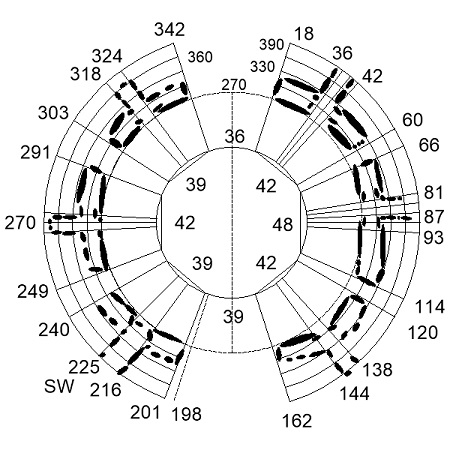 Consider that the azimuths of all the radii shown on the plan are multiples of three degrees, which might argue that three degrees is a whole number of circumferential units upon one or more of the concentric circles. In any event, there appears to be a case for suggesting that the rings might have been drawn using some unit of measure upon a circumference.

The inner ring is about 14m (46 feet) in diameter depending on where it’s measured. This would give a circumference of 270 of the above (Aubrey Ring) units. From thereon, the remaining circles drawn are spaced at 30 unit intervals, resulting in there being one ring that is a multiple of 120 units, that is, 360 units. On this particular circle, then, one degree equals one unit, though the builders most likely didn’t use degrees as such. Circles in multiples of 60 units (particularly 360) are not uncommon across Britain.

Note that the top entrance, at 36 degrees, would be a whole number of units on all rings.

Below is a Model (of what may have been intended at Meayll) and a Template (of what resulted). The builders possibly got some things slightly wrong, which should warn us against the suggestion that they never made mistakes or never changed their minds - or even that they necessarily used precisely the same length of unit across all sites.