Mysteries :  The Official GrahamHancock.com forums
For serious discussion of the controversies, approaches and enigmas surrounding the origins and development of the human species and of human civilization. (NB: for more ‘out there’ posts we point you in the direction of the ‘Paranormal & Supernatural’ Message Board).
Welcome! Log In• Register
Go to: Forum Home•Board•New Topic•Search
Re: O C T allegation. . . clarification?
Author: Scott Creighton ()
Date: January 23, 2019 10:18PM

MA: I am skeptical towards your Sphinx-G2 line, but this date lends more credibility to it, imo, than 17.820.


SC: On the surface I would agree with your statement here. However, there is something very critical to all of this that needs to be understood.

From my perspective (and assuming I have correctly interpreted the Queens structures here at Giza, along with the Lehner-Goedicke Line as presenting a Precession Timeline), then to establish a specific date we need to know four things:

This is to say that the current precessional motion of the Orion Belt stars is moving from min to max culmination (G3 Queens to G1 Queens). On the surface this looks like the G3 Queens are indicating a past min culmination date of ca.10,460 BC whilst the G1 Queens are marking a future max culmination date of ca.2500 AD. This would make the G2-Sphinx intersection point 3,100 BC. But were the pyramids built between 10,460 BC and 2,500 AD? Or were they built in the previous half-precessional cycle of 23,420 BC to 10,460 BC?

We can ONLY answer this question by knowing the direction the Belt stars were precessing when the Gizamids were planned/built. Without this knowledge the G2-Sphinx intersect point on the Lehner-Goedicke Line could be either 17,820 BC or 3100 BC. I think the designer's/builders would have understood this pendulum dating 'problem' and would have built into this stellar precession clock a marker of some kind that would allow us to know the precessional motion direction when the structures were being built. There is simply know way around this. They would have to build something into the layout at Giza that might be a clue to the direction of Orion's Belt's precessional motion at the time the pyramids were designed/built.

I speculate that the designers have given us such a marker in two possible ways. Have a look at the image below: 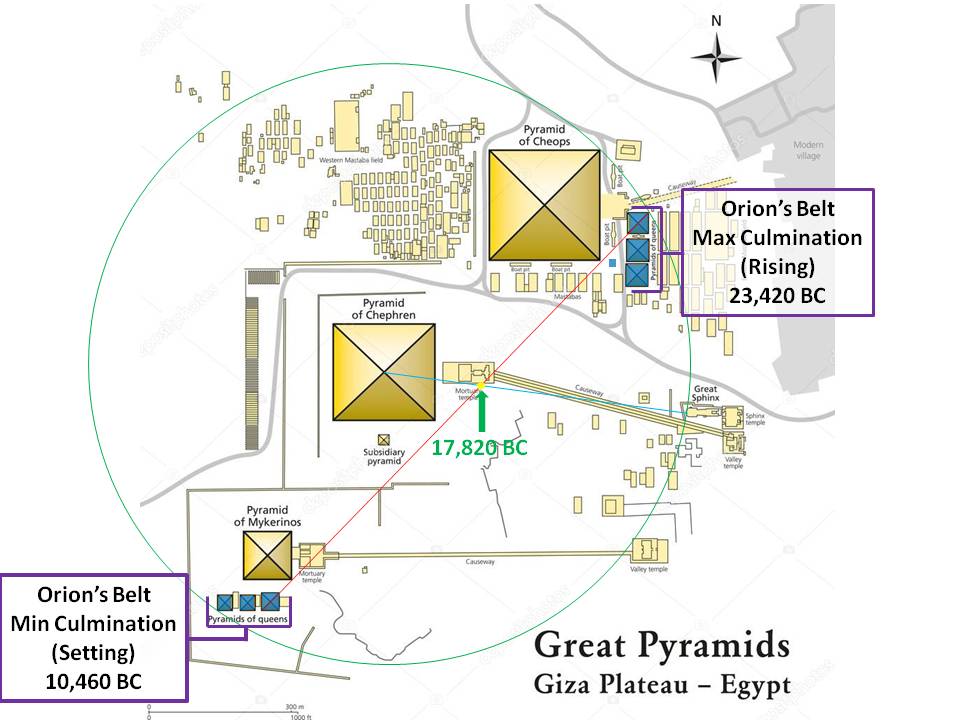 In the Great Giza Circle (above) we observe that the three points or nodes of the Sphinx (1) and the two culminations (Queens - 2 & 3) are connected with the circle and these aspects of the design are essential (along with G2 centre) to marking the timeline at a very specific point.

But LOOK - there's a FOURTH point also right on that circle and it is the NE corner of G1.

Now it is entirely speculation on my part here but this may be the marker we need that tells us that this is the start point of the precessional motion i.e. that when the pyramids were being designed/built, the precessional motion of Orion's Belt started from this end of the Precession Timeline i.e. from max (G1) to min (G3) culmination.

A second method I think the designers may have used is in the very dimensions of the Gizamids themselves which, if this GIZA DESIGN PROPOSAL is correct, it shows that the design of the Gizamids began from G1 (Al Nitak) towards G3 (Mintaka) i.e. from max to min culminations.

Once again all speculation, of course, BUT the point is - we absolutely NEED such an indicator (of the precessional direction) and the above are couple of possible means by which the designers could be indicating the precessional direction i.e. the start point of the precessional motion of the Belt stars when this design was first conceived. And if my speculation is right (yes - I know, I know), then the date has to be 17,820 BCE because the above two possible indicators of the precessional direction seem to indicate that precession was moving from max to min culmination at this time. And you are not likely to use a max culmination date that has not actually yet occurred i.e. 2,500 AD thus the start point (i.e max culmination) for this precessional half-cycle must be 23,420 BC with the min culmination of 10,460 BC which means the intersection point on the Precession Timeline MUST be 17,820 BC. (I should point out, however, that there's a considerable caveat with regards to this date which I present in a further youtube presentation but I won't be going into that here).

MA: The "original/intended" placement of G2 should point to an even more recent date?


SC: Given what I have said above, I am fairly convinced that the intersection date must fall between the previous max and min culminations of Orion's Belt of between 23,420 BC and 10,460 BC i.e. 17,820 BC.