Mysteries :  The Official GrahamHancock.com forums
For serious discussion of the controversies, approaches and enigmas surrounding the origins and development of the human species and of human civilization. (NB: for more ‘out there’ posts we point you in the direction of the ‘Paranormal & Supernatural’ Message Board).
Welcome! Log In• Register
Go to: Forum Home•Board•New Topic•Search
Folkton Drum Foot
Author: Dr. Troglodyte ()
Date: December 21, 2018 09:02PM
University professors Teather, Chamberlain and Pearson have published the paper “The chalk drums from Folkton and Lavant: Measuring devices from the time of Stonehenge” in the British Journal for the History of Mathematics. This paper proposes a prehistoric measurement of 0.322 meters (12.68 inches) that they describe as a ”long foot”. The Abstract reads:

”Investigating knowledge of mathematics and the use of standard units of measurement in prehistoric societies is a difficult task. For the British Neolithic period (4000–2500 bc), attempts to refine our understanding of mathematical knowledge for this period have been largely unsuccessful until now. Following recent research, we propose that there is a direct link between the design of the monument of Stonehenge and the chalk artefacts known as the Folkton and Lavant Drums, in which the Drums represent measurement standards that were essential for accurate and reproducible monument construction. This has important implications for future analyses of artefacts and monuments for this period.” 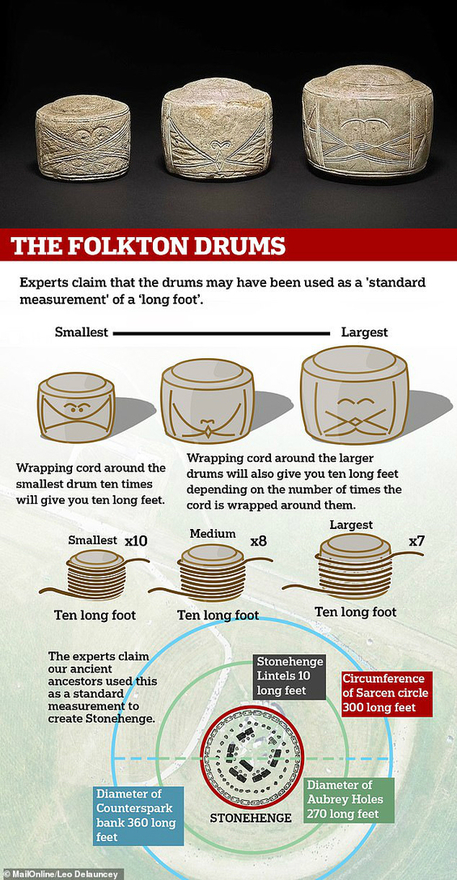 Unearthed from the Neolithic grave of a child in 1889, three chalk drum-like cylinders, dating from ca. 2500 and 2000 BC, have interested researchers since the time of their discovery.

The paper’s authors speculate that the cylinders represent a ‘measurement standard’ for the planning and construction of stone circles erected in ancient Britain.

Related Sources: Mystery of Stonehenge cylinders has been solved! Stone 'drums' found in a child's grave were used as an ancient tape measure to plan out the building of the great monument

Ancient Stone Henge cylinders were used as a tape measure

Historic Stone Henge cylinders had been used as a tape measure