Mysteries :  The Official GrahamHancock.com forums
For serious discussion of the controversies, approaches and enigmas surrounding the origins and development of the human species and of human civilization. (NB: for more ‘out there’ posts we point you in the direction of the ‘Paranormal & Supernatural’ Message Board).
Welcome! Log In• Register
Go to: Forum Home•Board•New Topic•Search
Egyptology is insane!
Author: Duketown ()
Date: December 03, 2018 04:39AM
Egyptologists and linguists Wrote:
-------------------------------------------------------
> If you want to prove it you must have a process to
> go from symbol to meaning. You disagree with the
> process discovered by 180 years of studies.

Correction
If the alternative researcher want to prove an alternative translation system they must have a process to go from symbol to meaning with coherent and reproducible results. This last part egyptologists and linguists purposefully forget because they don't apply the scientific method themselves. Since egyptologists and linguists can't explain their rationale, egyptologists only repeat wordlists with an added repertoire of tools to bent interpretation in the direction of their masters' imagination.

Besides and more importantly, egyptologists and linguists forget to mention there is a process from sound to symbol underlying that initial statement. That symbol egyptologists and linguists start with, is the representation of underlying sounds which represents the language and it's meaning. This creates a fixed point in the middle of the translation process. But translation start with the sound. Sound is the LANGUAGE; language is not a broken interpretation of those symbols. 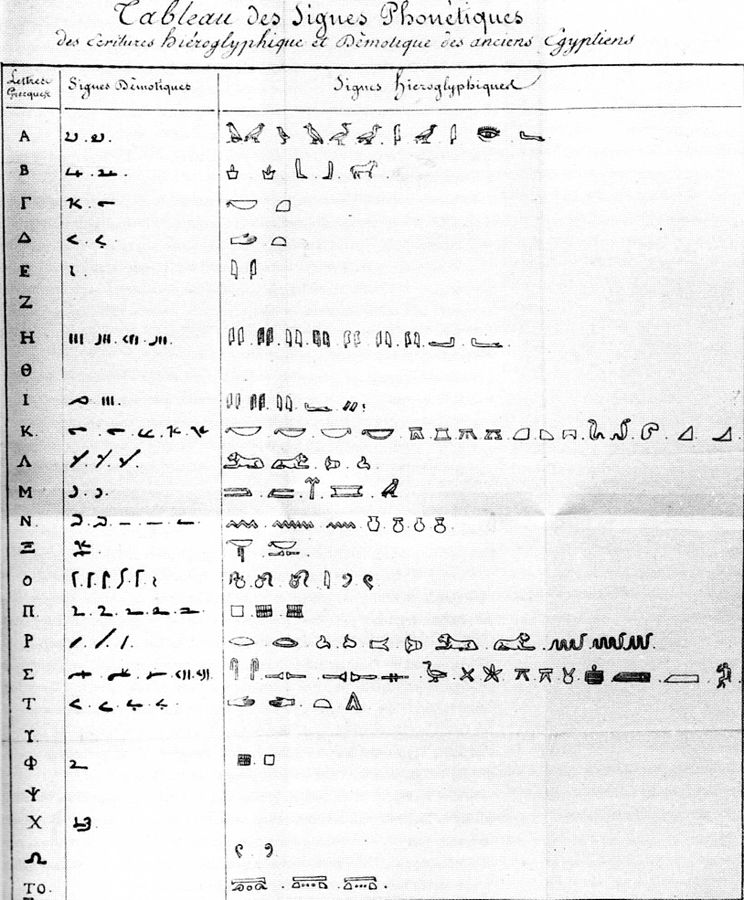 See addendum with some updates that happened by trail-and-error. Note that Champillion's reasoning is also MIA. permanent link


Current interpretation of glyphs still is lacking meaning and Champillion reference of thinking (culture, religion, knowledge, experience etc) ofc influenced his choices in grouping those symbols into single letters belonging to the Greco alphabet.
He learned those magnificent skills, like fluently interpreting foreign languages, on religious schools, paid for by his non-secular government. This didn't contribute to this man's open mind.
To be more specific: Those 19th century egyptologists laid the foundation of the believes of egyptologists and linguists. In other words: they had broken worldviews and still, egyptologists and linguists don't have the rationale to elevate themselves to sanity. They are required to have a rationale, since language is an expression of reason.

To bring egyptologists and linguists back into sanity, it's time for them to understand that they can't make any linguistic claims without explaining the rationale of why a certain sound represents a certain letter; ancient languages can be reasoned otherwise it's "no language without a message".
You cannot solve half a puzzle and claim to have a proven rationale while most of it's results are incoherent. In my brain, the proof only leads to one conclusion: Champillion didn't understand the sounds. He was really eager to prove Egyptians destroyed Jerusalem and he first wrote down a story about Egyptian religion, BEFORE he even could decipher the description of the mummy of Bakt-en-Hor.

Egyptologists and linguists fail to prove thier own rationale. They refer to 180 years of Egyptology as if that means some athority but those 180 years delivered sub-optimal results at best. A sane explanaiton is that egyptologists and linguists are working from a wrong base: you can't fuse multiple sounds without losing meaning.
If you don't understand: try to articulate /t/ and /d/ and experience those letters are almost opposite in articulation, yet that Charlatan fused them. I need to know why!
The underlying sounds still aren't understood, only improved by trail-and-error and not deduced with reasoning. And even with an addiotional repertoire of tools, egyptologist still deliver results that are sub-optimal at best.

Egyptologists and linguists follow the same style of reasoning: drenched with assumption. If you want to judge an alternative researcher, prove your own rationale. Why does this insanity exists? 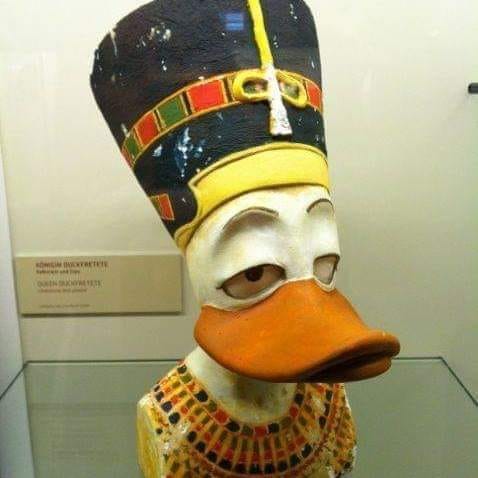 Are you really sure that "kwak" has the same meaning as "kwik"? And how come "kwek" became "kwak"? Why fuse 3 ducks into 1? They are 3 individuals; not 1. I don't believe "kwek" and "kwik" are happy becoming "kwak".

Important note:
Linguists (i.e. Loprieno) classifying these languages is also unscientific. They should understand that it's the glyph sound itself that represents language; not the imaginary interpretation of egyptologists. Whether linguists call it abracadabra or Semitic, the sounds remain the same. Believing that Champillion's interpretation is more important than the meaning of the sound that glyph represents is insane. All Egyptologists are charlatans or unscientific disciples and that includes the linguists who doesn't care to explain their fundamental rationale. If wrong, I will easily retract this statement: Proof that there is no meaning lost when sounds where mapped to letters.

Language isolates also need justification. You can not even classify something as a language if you can't explain what the sounds mean. That's why birds tsjilp instead of speaking. Clearly, egyptologists and linguists treat that what they can't understand as a language. I already explained that means we need to have a rationale. Sure, any sane egyptologist or linguist recognize this but they can't explain beyond Charlatan. They believe they don't have to but science knows they do.

As it stands now: The glyphs Egyptologists and linguists are trying to interpret can't even classify as language. A language is a fixed set of coherent definitions. The dynamics egyptologists use, is what is wrong with the translation system. And it starts with fusing sounds since this causes loss of meaning.
Egyptologists compensate this with flexibility to mix and match interpretations, resulting in incoherent meaning. The base egyptologists working from is wrong. The incoherence I mean isn't the incoherence resulting from wider interpretation of glyphs; I mean incoherence due to broken phonogrammatic system, with incoherent rules, and a translation system which include a repertoire of tools to bent interpretation in any direction, etc.

I like to compare egyptologist to a mechanic with 2.000 tools, only to deliver a broken car. Instead of reconsidering their skill set, they buy more tools to only add to the confusion in their toolbox without fixing the car.

I hope this post will help to make sure Egyptologists and linguists become scientific and it's their burden to prove their rationale. As it stands now, the alternative researcher has all reason to speculate while egyptologist are in no position to judge. An open mind is needed. Just accept the fact we don't know and don't become like religion or science.

I tried proving information is lost and explained there is no rationale using the scientific method. Both statement seem correct but this isn't reflected in current day reality.

The Omega assignment is false. standard transliteration that is a "w" sound not a "o"
The seat is "p" not "phi"
Only the first two symbols are correctly pronounced "S". The next three symbols are "z"
Rho is only the mouth symbol
The Lion is "rw" in Old Egyptian see the very text I posted for a tandem of it
"l" in Late Egyptain as per Ptolemis
The next one up is correct. That's p and comes from Ptolemy as well
Ditto the sling
The next one looks like "ks" and "kz" , but the sound in Greek is more like "kh" if that's supposed to be an X
The wavy line is n, but the jar is nw
M looks correct
The lion in late Egyptian is "l" looks good. The flower symbol looks like a lotus, but not sure.
Kappa is correct for the first four symbols, the rest are wrong
I and H look ok for the dual reed but the arm symbol is wrong. This also came from Ptolemis
J (Greek epsilon) is ok for the single reed
D and T are not delta, only d
Gamma is wrong. Neither symbol sounds like a g
The leg is ok for b, not the other two symbols as far as I can make them out.
The first row is the worst. The best match for a Greek A is the arm. All the others are wrong from the looks of it.
They are "d", "t", and the word "dj" which is not a letter.
The reason why Champollion converged them into Greek "t" is that this was the version on the stone he could read. I can assure you that no egyptologist, heck no tourist learning glyphs in Cairo, would read a "rdj" as "t". "rdj" means to give. It's a verb, not a letter.

Extra:
A nice quote from forum member and Semitic tongue expert & egyptologist Martin Stower
> > To labour the obvious, the difference between /t/
> > and /d/ and /s/ and /z/ is voicing. Otherwise
> > same point of articulation, so it could be
> > difficult in the early stages to differentiate
> > sounds with this much in common.

And now?
I'm not that good with fancy words but I can smell nonsense. And insanity really stinks. It's really simple in my view:

You can either proof there is no meaning lost or proof that the system works. But I don't have to prove anything as long as Egyptologist or linguist don't explain their rationale to claim anything about glyphs.

Some reason:
* Sound is the LANGUAGE; language is not a broken interpretation of those symbols;
* A rationale is required, since language is an expression of reason;
* Choices without rationale can't be proven wrong;
* You can't fuse multiple sounds without losing meaning;
* A system that fails for 180 years disqualifies itself;
* Aren't we all looking for meaning?

By definition, a cook could have baked this cake. In my world, this isn't a cake and the dude (for simplicity I assume a male) isn't a cook.


Solution
New sanity (common sense replacing abrahamic views).
New system (1 sound = 1 letter. problematic glyphs to be determined later).
That's all. 100% certainty that this new system will render better results to work with. And it will also give a new perspective into the problematic glyphs, which will lead to new insights. I actually think it will be quite easy, once common sense becomes the guide.

In the end, everything is in the eye of the beholder. In my mind, it's time those abrahamics stop destroying the world.

Is my reasoning wrong? Is there an egyptologist or linguist who can send me back to the mystery forum? Or a scientist that tell me my reasoning is wrong/correct?

Thanks for reading & have a nice day!