Mysteries :  The Official GrahamHancock.com forums
For serious discussion of the controversies, approaches and enigmas surrounding the origins and development of the human species and of human civilization. (NB: for more ‘out there’ posts we point you in the direction of the ‘Paranormal & Supernatural’ Message Board).
Welcome! Log In• Register
Go to: Forum Home•Board•New Topic•Search
Misnomers [?]
Author: Dr. Troglodyte ()
Date: November 07, 2018 06:31PM
Lost in translation…

”5 Khufu cartouches were discovered in Khufu II. Only one cartouche of Djedefre was found, but also found was his Golden Horus name which leads them to believe he was still prince at the time which I do not think makes much sense. This is but one of the pharaoh's royal titularies which I do not see where it is ever associated with being a "prince" if not specifically the king and if you read Verner it is the presence of these two names that clearly establishes Djedefre as the king at the time which is not disputed by the Egyptologists of Khufu II. Why would this now mean in Khufu II he is the Crown Prince" just because Khufu's catouche is found? Not to mention a name in a cartouche is a pharaoh's throne name supposedly meaning he has ascending to kingship. The meaning of the Golden Horus name is disputed regardless, however, it appears the only reason they say this is to mean he was prince at the time is because Khufu's cartouche is also found and not because of precedent or known meaning…

Regardless, I can't say it makes much sense for Djedefre's name, let alone his cartouche (throne) and Golden Horus name, to be on a block at all if Khufu was still pharaoh regardless of whether he was "completing it for his father" or not.”


There is much to be desired in Affifi Rohim’s presentation; yet, for the present, it is what there is [known] to work with. At frame 36:28 of the referenced video, is found the slide crop below: 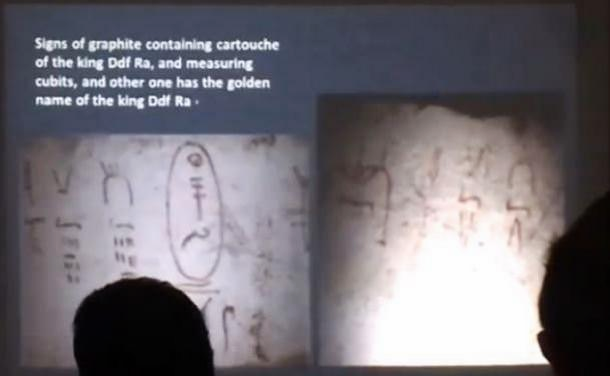 Note the word ”graphite” (likely misspelled) is pronounced ’graffiti’ (likely correct). Further note, the term ”king” references both the ”cartouche” and the phrase ”golden name”. As previously posted, Yoshimura, reported ”the crown prince Djedefre, not ”golden name”. Is this another misnomer on the part of Mr. Rohim?