Mysteries :  The Official GrahamHancock.com forums
For serious discussion of the controversies, approaches and enigmas surrounding the origins and development of the human species and of human civilization. (NB: for more ‘out there’ posts we point you in the direction of the ‘Paranormal & Supernatural’ Message Board).
Welcome! Log In• Register
Go to: Forum Home•Board•New Topic•Search
G1 and the Boat Pits of Djedefre
Author: Thanos5150 ()
Date: November 01, 2018 02:52AM
Of the many workmen's graffiti marks found on the underside of the blocks that cover Khufu's southern Khufu boat pits, one notes the 11th cattle count which given only Djedfre's name is found, not Khufu, implies this was the 11th cattle count under Djedefre's reign. There is some debate whether the cattle count occurred every year or every other year, but this would mean that Djedefre was making these boat pits some 11 or 22yrs after Khufu's death/end of reign. As noted in the picture above, there is also a secondary temenos wall running over the top of the boat pit meaning this too would have been made sometime after the boat pits were made.

As I have noted before regarding boat pits in general, this practice was seemingly abandoned after the 2nd Dynasty in which for reasons unknown, if they are even related, Djedefre revived the practice. A reference of G1's boat pits:

The evidence strongly suggests Djedefre was responsible for the southern boat pits. Given the unreasonably close proximity of the causeway boat pit to the causeway, i.e. it respects and was built after the causeway, it stands to reason it too was made sometime in Djedfre's reign or later. The eastern boat pits are outside the main temenos wall which all things considered I would assume these too were made In Djedfre's reign or later. Eastern/causeway boat pit perspective: 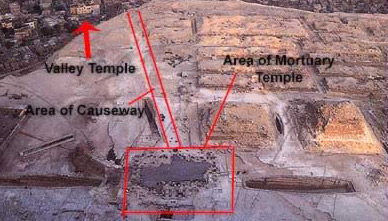 Also to consider as noted before is Khufu's boat itself which the interior displays in wood a style of column not found until the 5th Dynasty: 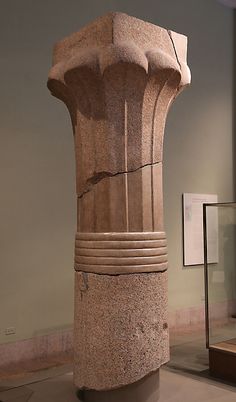 Though no one really knows for sure, these boats are equated to the later Aten ("solar barque") which the pharaoh/RE is to ride east to west across the vault of the sky along the path of the sun. The rub, however, is that G1 has 5 boat pits, none on the west side (or north), Khafre has 5(6?) boat pits to the sides of the mortuary temple (none around the pyramid like G1), all on either the south or north-none east or west, and yet despite the fact 2 of the roofs were found almost entirely intact there were no boats.
Khafre: 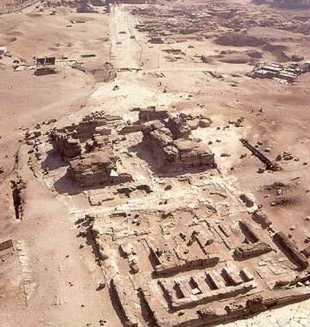 It seems in reality there was no rhyme or reason to the orientation of the boat pits nor does it make much sense why a pharaoh would need 5 boats in which poor Menkaure had none.

At any rate, it is interesting to think, as the story goes, that there was perhaps as much as a 22yr gap (or more) between the end of Khufu's reign, i.e. working on G1, and the resumption of pyramid building with Khafre. All told it definitely appears the boat pits of G1 at least were added more than a decade, perhaps more than two decades, after Khufu had died and supposedly construction of G1 completed. It was also at this time, or later, a second temenos wall was built right over the top of the southern boat pits. Given the abundant graffiti found on the underside of the roofing blocks of G1's southern boat pits, with many cartouches of Djedefre, it seems curious for there to be none found on the underside of the two largely intact roofs of G2. Wouldn't that be a hoot if there too Djedfre's name was found....

For more along this line of thinking HERE.