Mysteries :  The Official GrahamHancock.com forums
For serious discussion of the controversies, approaches and enigmas surrounding the origins and development of the human species and of human civilization. (NB: for more ‘out there’ posts we point you in the direction of the ‘Paranormal & Supernatural’ Message Board).
Welcome! Log In• Register
Go to: Forum Home•Board•New Topic•Search
Rediscovering The Sources Of Egyptian Metals
Author: Thanos5150 ()
Date: August 10, 2018 02:55AM
Rediscovering The Sources Of Egyptian Metals

From one of the studies:

The 22 artifacts show similar production technology, but diverse origins of the metal, including an Early Dynastic Egyptian object from Abusir, high nickel metal in which is consistent with ores and artifacts from Early Bronze Age Anatolia, in present-day Turkey.

"Lead isotopes showed us where the ore was most probably coming from," said archaeometallurgist Jiří Kmošek. "The results were quite unexpected," added Egyptologist Martin Odler. The study confirms that special metals had circulated around the Ancient Near East earlier than previously thought.

An assemblage of ancient Egyptian metalwork from the Early Dynastic and Old Kingdom periods, currently in the Egyptian Museum of Leipzig University (Germany), has been studied using a wide range of available archaeometallurgical methods. The 3rd millennium BC Egyptian copper metallurgy is known only superficially until now. The data are interpreted in the framework of the known and reconstructed distribution networks of ancient Egyptian society. The production technology of the objects has been examined. The lead isotope analyses have made it possible to discuss the origin of the ore used for the production of Old Kingdom metalwork for the first time. A rather surprising presence in the Early Dynastic assemblage of object similar in isotopic ratios to Anatolian Early Bronze Age metalwork is discussed.

The artefacts were found at the Egyptian sites of Abusir, Abydos and Giza. They were excavated in the royal tomb of King Khasekhemwy at Abydos (c. 2700 BCE) and non-royal tombs of officials from the Early Dynastic Period (Abusir; c. 3100–2900 BCE) and the Old Kingdom (Giza; c. 2350–2275 BCE). 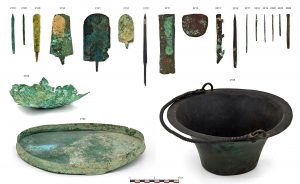 The greatest surprise was a large bowl from a Dynasty-1 tomb at Abusir (Fig. 2). It is peculiar by its contents of arsenic (1.4%) and nickel (4.8%), very unusual for that period in Egypt. The lead isotope ratios match Anatolian ores and are similar to contemporary Early Bronze Age Anatolian artefacts, in a distance more than 1,500 kilometres.