Mysteries :  The Official GrahamHancock.com forums
For serious discussion of the controversies, approaches and enigmas surrounding the origins and development of the human species and of human civilization. (NB: for more ‘out there’ posts we point you in the direction of the ‘Paranormal & Supernatural’ Message Board).
Welcome! Log In• Register
Go to: Forum Home•Board•New Topic•Search
The Mortuary Temple of Menkaure
Author: Barbelo ()
Date: June 13, 2018 11:19AM
I know that this has been discussed previously but I feel that the issues presented here sharply focus on the discrepancy in the timeline between the building of Menkaure's Pyramid and Temple.

ATA Menkaure never finished his Pyramid or Mortuary Temple which was completed by his son/son-in-law, Shepseskaf.

But Shepseskaf couldn't continue on with the pyramid complex as designed, and resorted to an adobe finish. Apparently, he also had to build his massive mastaba down at Saqqara and, as Menkaure was now dead, did a slap-up job to finish.

I won't go in to the Pyramid side of this, as that is a separate discussion, but will concentrate on the Mortuary Temple which, one could assume, must have been completed post-pyramid.

When Reisner excavated the MT in 1906/07 he was confronted with the following dilemma. The temple was a primitive construction which raises questions about its age, as it should have been an improved version of his predecessor's temples. But it exhibited none of these qualities. 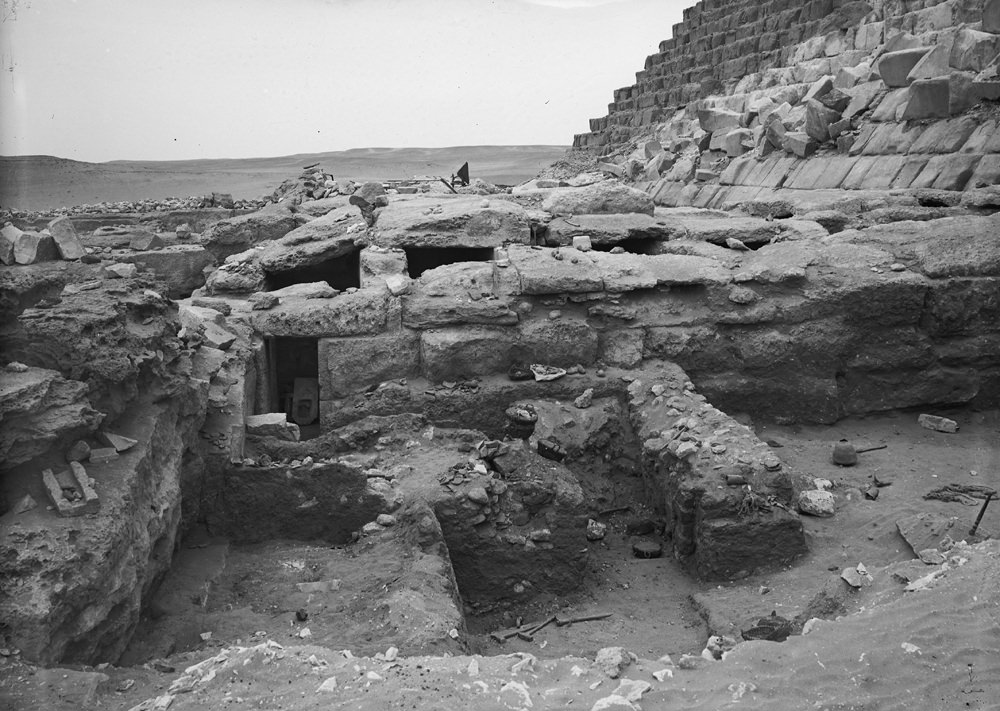 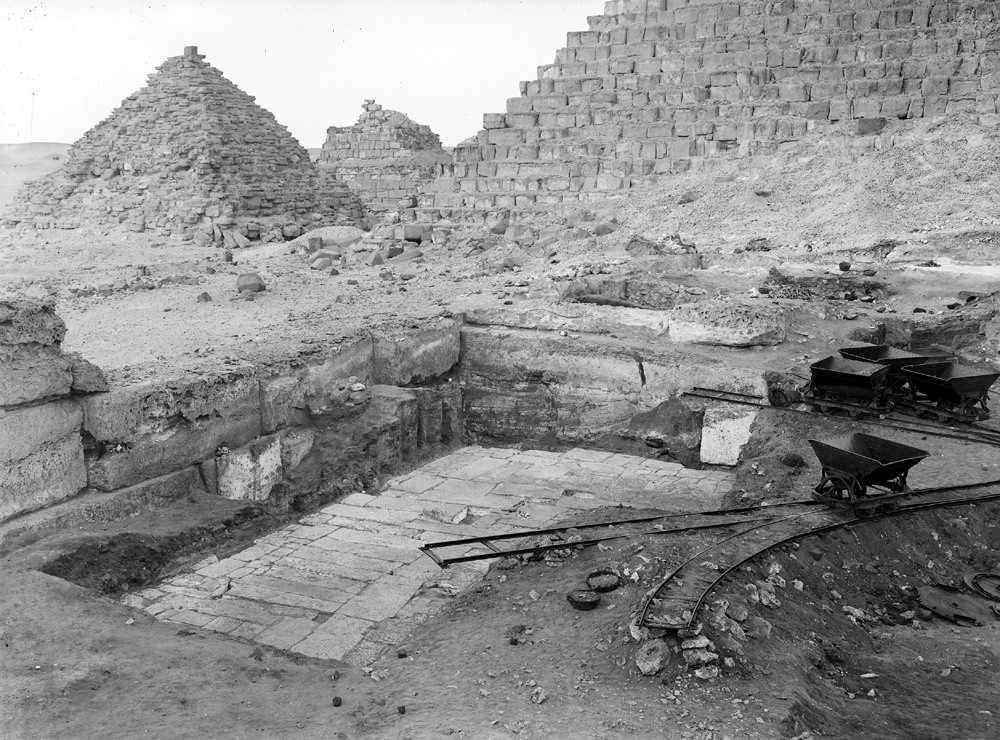 The corridors of the temple consisted of highly eroded limestone blocks faced with granite blocks of unknown origin faced with an adobe veneer.

The question is, "If the pyramid and the temple are contemporaneous, and the erosion of limestone, to the degree to which it is exhibited in the blocks, takes hundreds, if not thousands of years to reach the state of deterioration which these temple blocks are obviously in, how can both structures have been built at the same time?"

Further, the eroded sections of the limestone blocks have been further chiseled and granite blocks of an unknown origin (Reisner refers to them as casing stones which clearly they aren't) have been haphazardly placed against the limestone.

Thirdly, the adobe veneer attributed to Shepseskaf covered both walls.

This is impossible to achieve in the timeframe ATA. 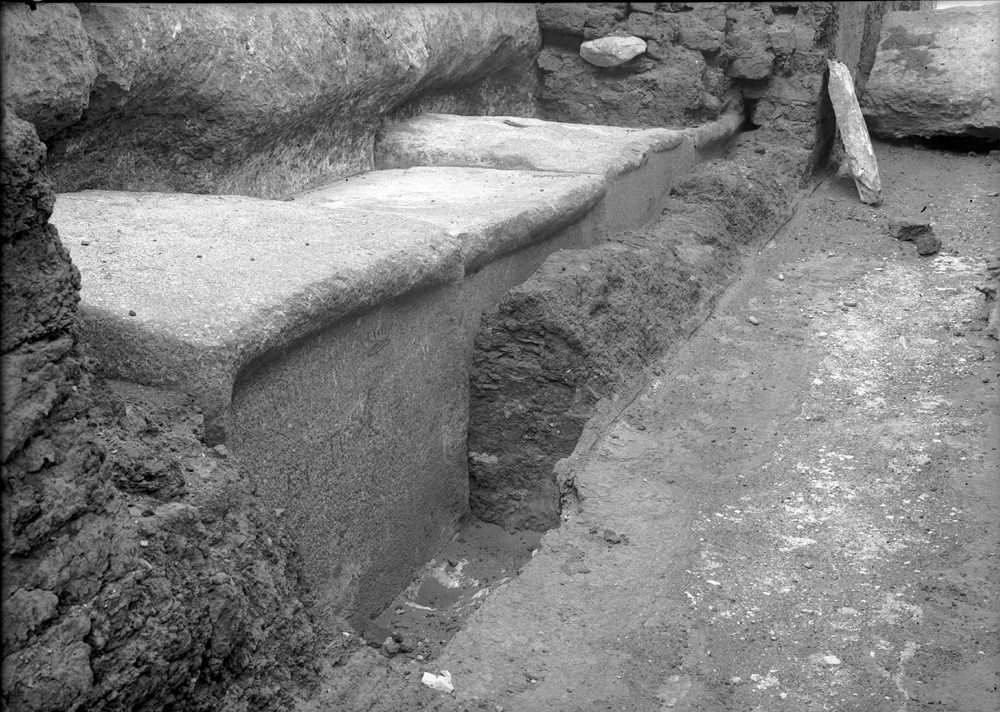 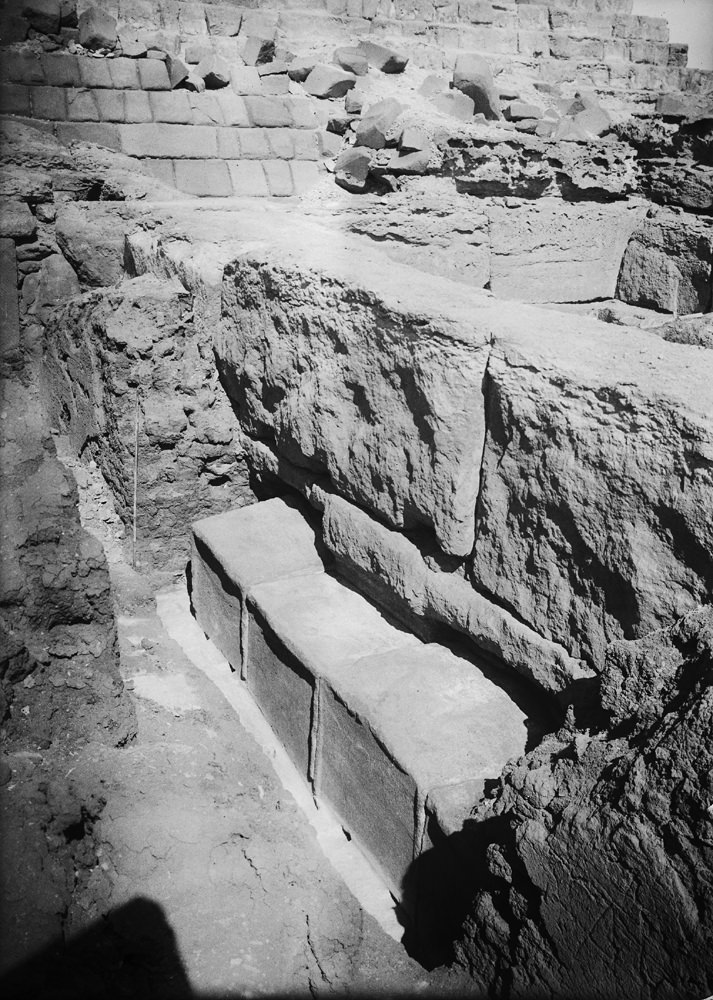 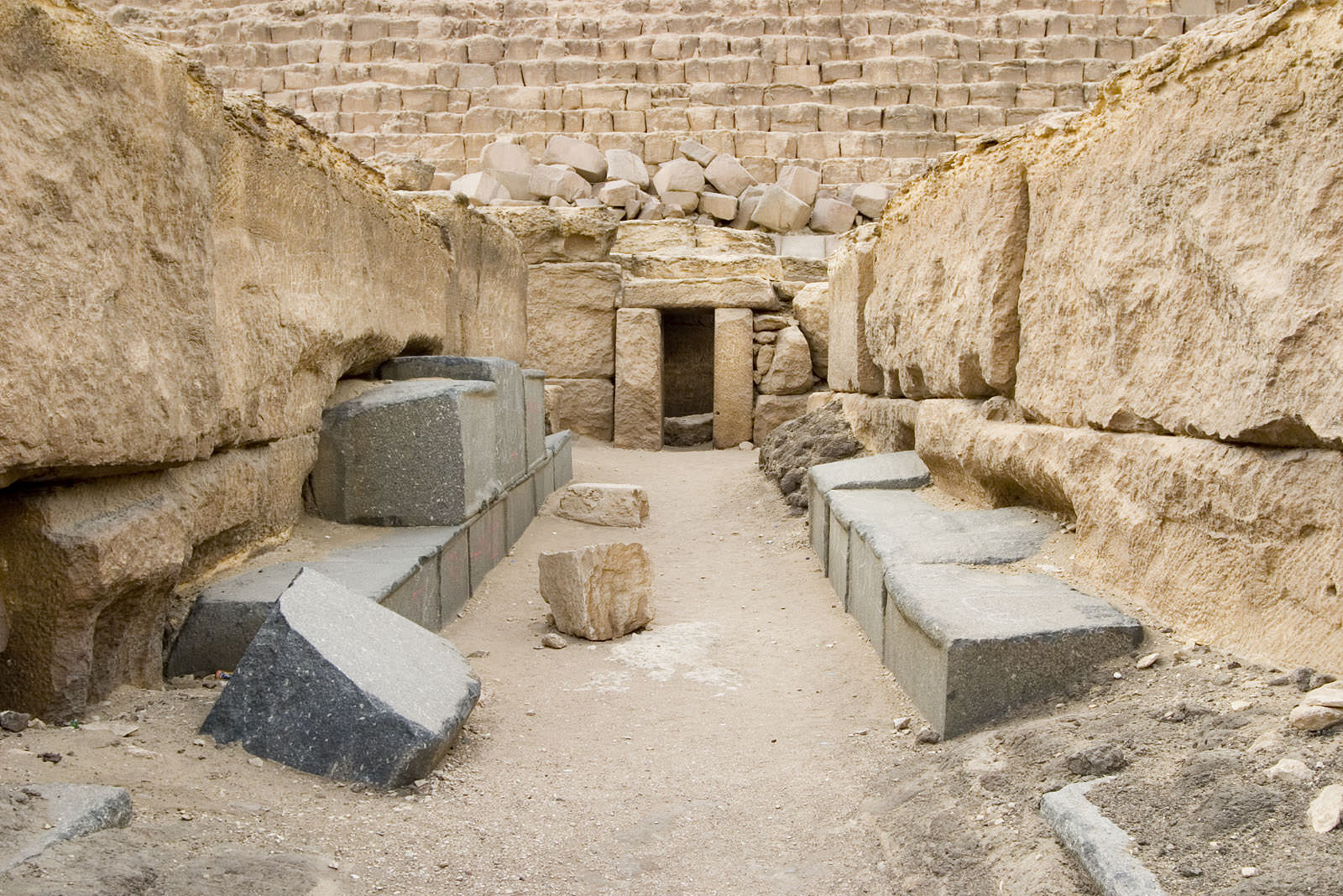 However, the temple definitely provided evidence of Menkaure being present. 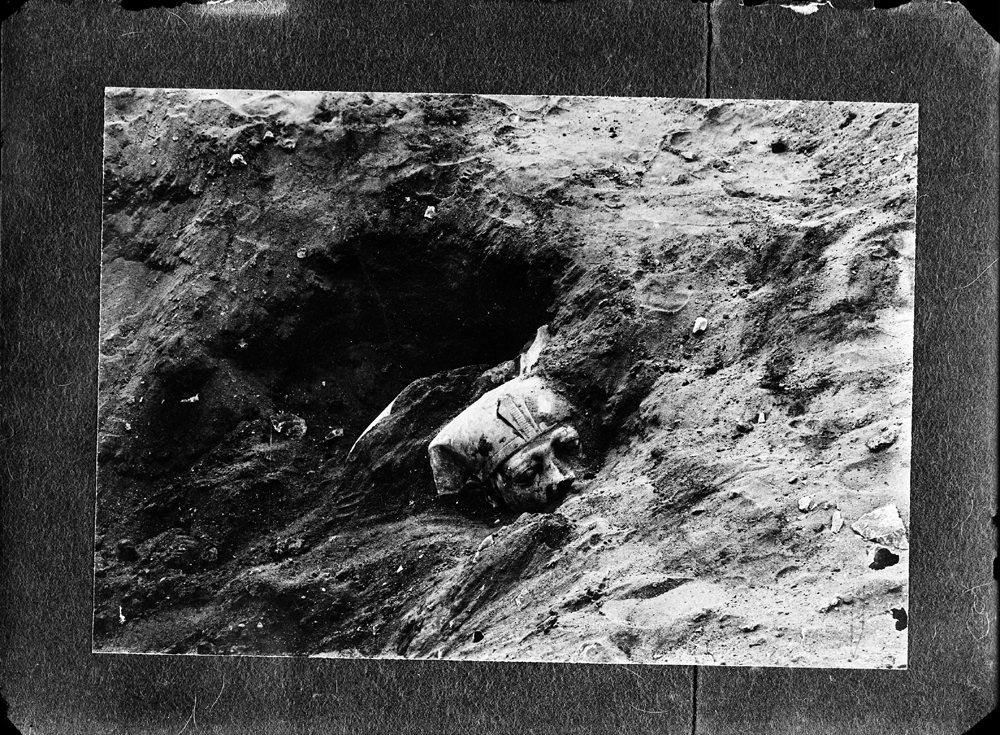 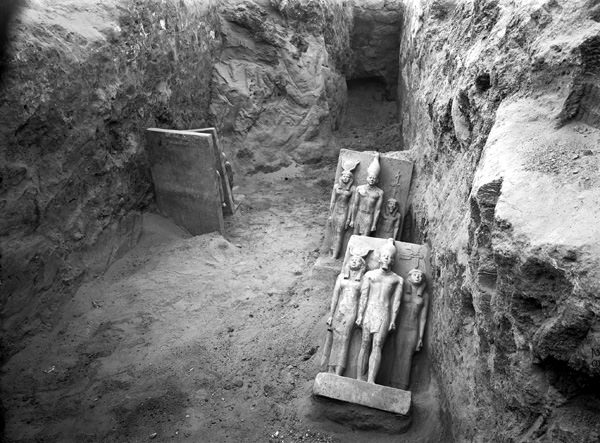 It is difficult to reconcile the extraordinary workmanship in these statues when compared with the primitive environment in which they were discovered. It would appear that Menkaure seconded this temple for his own purposes. 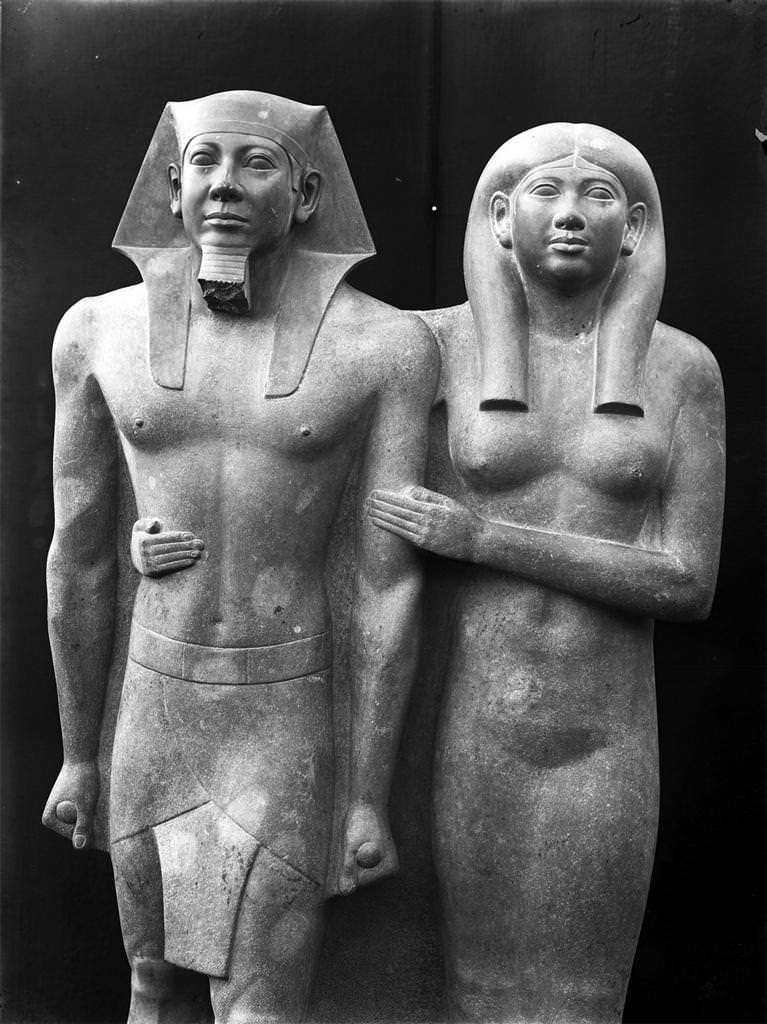 There is little concrete evidence to support the contention that Menkaure and Shepseskaf actually built the original temple, which brings up the question, "If Menkaure didn't build the temple attributed to him, did he build the pyramid which bears his name?"