Mysteries :  The Official GrahamHancock.com forums
For serious discussion of the controversies, approaches and enigmas surrounding the origins and development of the human species and of human civilization. (NB: for more ‘out there’ posts we point you in the direction of the ‘Paranormal & Supernatural’ Message Board).
Welcome! Log In• Register
Go to: Forum Home•Board•New Topic•Search
Re: Creighton article slips out unannounced
Author: Corpuscles ()
Date: June 13, 2018 11:13PM
Morten Wrote:
-------------------------------------------------------
> All of the numbers in question are accompanied by
> either the nfr sign (F35) or was sign (S40). Both
> are vertical signs,
yet presented as horizontal
> here. Have Scott discussed these signs elsewhere?
>
> Morten

I note that even though this is entirely your own question! (ie not Stower's or mine, both on the 'no talky' list) and despite SC monitoring and further contributing in the thread he will not address it directly. 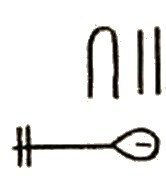 Clearly if the nfr symbol is orientated correctly, then it merely means the number is ordinal (12th.)
your scenario 2

And to your 'unanswerable question' LOL! of course there is no way possible in 1837 that Vyse or his accused colleagues could possibly be aware of OK hieratic rules or conventions and unlikely they even knew what the numerical glyphs meant.

Why would they go to the trouble/risk of faking on a difficult roof beam something they knew nothing about?
…..and seemingly despite 2 centuries of scholarship and access to it, seemingly after a lifetime passion SC doesn't either!