> Ok , well with due respect to you two im going to
> disagree , and hold on to my Platform hypothesis
> .
>
> Now if Audrey's suggestion is valid about shoring
> up the cliff face then i think they would have
> done a much better job than what we find at this
> location, there is one glaring fault with the
> holding back the cliff idea, and that is the
> Blocks are holding back nothing but thin air.

I didn't realize by "platform" you meant only the rectangular area. I share Thanos' confusion. I thought you meant all, of what appears to me, to be related to that 'platform', including the stones in the side of the cliff. As shown in this picture

Granted, can't be sure if it's connected/related to your platform, but for now I'll assume it is.

As far as how well the job was done, shoring up waterways isn't rocket science and I hear the best way is with stones.

IF there was a harbor at the foot of the Sphinx as Lehner thinks, then there was water lapping at the cliff. If there were canals, the water came from the Nile or the Nile was at a much higher level when the pyramids were built. I really don't think it was a flood that carved the cliff. Canal embankments are common and necessary. 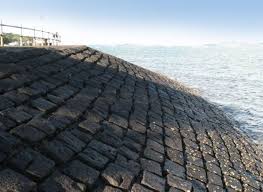 If there wasn't a harbor then you're back to dragging stones on the ground.

Haven't you ever wondered why they built G1 so close to a cliff? Or how that cliff was formed?

> You can clearly see each side of the platform has
> sharply defined stacked blocks , making both sides
> vertical , from the images provided by Manu and
> those ive posted from AirPano shows no evidence of
> support to the bedrock from the vertical sides of
> this platform.

Not sure what you mean by "support to bedrock".