Mysteries :  The Official GrahamHancock.com forums
For serious discussion of the controversies, approaches and enigmas surrounding the origins and development of the human species and of human civilization. (NB: for more ‘out there’ posts we point you in the direction of the ‘Paranormal & Supernatural’ Message Board).
Welcome! Log In• Register
Go to: Forum Home•Board•New Topic•Search
Re: The First Question
Author: Thanos5150 ()
Date: September 26, 2018 04:17PM
Pre-4th Dynasty at Giza

It is bewildering to me the lack of interest in this subject as you'd think actual evidence of earlier occupation at Giza would be paramount to these discussions. At any rate, if you have the time and interest to broaden your scope, it would be very interesting (to me anyways) if you could investigate the Wadi and Southern Cemeteries to get an impression, if one is still to be had, of this earlier occupation. A bookend to this are the palace facade tombs of Khentkawes and Kai.
Kai:

Manu Wrote:
-------------------------------------------------------
> I speculate that this may have been debris from
> centuries of stone pilfering. However, some
> sections in that photo look like orderly rows of
> blocks even stacked. Was this ever a structure. If
> it was, then it rested on the trial passages in
> which case it may have been Khufu's Ka pyramid or
> the beginning of it and it was cleared away. I
> find that hard to believe, but this is the
> Mysteries Forum: Leave your Preconceptions at the
> Door!
>
> If you notice the area north of a causeway tends
> to be devoid of structures. This brings up an
> interesting topic which relates back to astronomy
> and the Pyramid Texts. Cladking already alluded to
> this in an earlier post here. The "Mr-N-Kh3" was
> the winding water way the king had to cross to
> reach the imperishable star zone. Rolf Krauss made
> a convincing argument that this was the ecliptic.
> Planets and the Moon can be observed to cross,
> which is probably why there were several Horus
> forms...and of course the ferryman Moon-Thoth.
>
> So if the causeway was meant to be an earthly
> representation of the path of the sun across the
> sky and if only kings could pass to the north
> where the "jkhemw skjw" dwelled, then this nicely
> explains why buildings were off-limits in the
> north....except a building dedicated to the
> King's Ka. This I would offer as soft evidence
> that the out-cropping was not a foundation but a
> path from what once was meant to be a pyramid
> separate from all the zoo of pyramids and mastabas
> east south and west of the Great Pyramid. And when
> the paradigm changed, the Ka pyramid was instead
> squeezed into the southeast corner. Was a
> north-placed Ka pyramid a new form leaning on the
> northern serdab of Djoser? Whatever it was meant
> to be, it was abandoned....or it, and the path to
> it like the hill on which G1 rests, was there long
> before Khufu.

Is there even one remotely confirmed or credibly suspected "ka pyramid"...? And if we look at the satellite pyramids of G1 and G3 they are built in 3's and G2 has none other than its cult pyramid which G1 also has one by the 3 satellites. Not to mention the serdab was still used after the 4th Dynasty. And if we were to apply this to the Giza pyrmaids as a whole it would seem more likely the serdab, the place of the KA statue, would have been the ancillary chambers, like the Queen's chamber:

With niche for the statue: 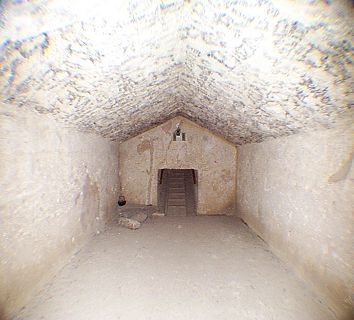 The secondary chambers are also found of course in the Bent and Red pyramids as well.

Also, regarding the whole "north off limits" idea would this not rather, for one, just be a matter of logistics given the narrow expanse between G1 and the cliff face: 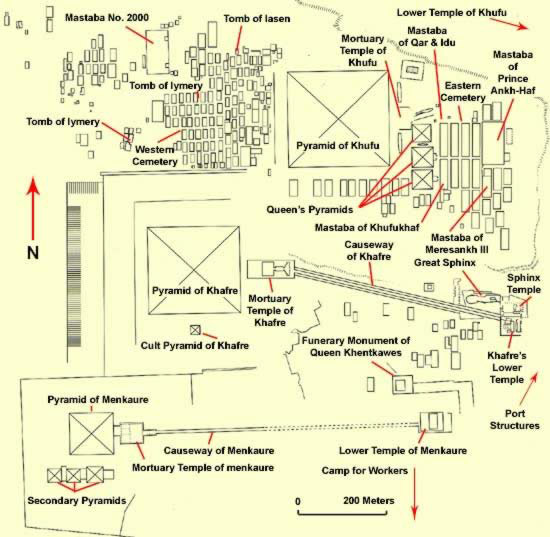 But more importantly it seems highly unlikely this ideology would only apply to Khufu and G1 leaving Khafre, for example, with the Western Cemetery directly north of his pyramid and poor Menkaure unceremoniously with the storage/workshop galleries directly north of his. Not to mention the G2 cult pyrmaid and satellite pyramids of G3 are located to the south with no possible northern buildings "dedicated to the king's KA".