Quote
We can see best path to G1 is like I have
> suggested in previous threads at the right of the
> Sphinx harbor where the modern road is today:

Hence why I keep saying it.

> I know that the majority of opinion is that to
> move heavy loads, a causeway was necessary.

Other than a few dullards here I do not know who says a "causeway" must be used let alone enough to constitute a "majority". What common sense and physics require is that some form of path be made to get something from point A to point B.

>
> Possibly. However, one needs to scrutinize the
> foundations to be certain of their depth with
> relation to dynastic water levels.

So, one would need to find actual evidence to support the hypothesis? How strange.

Quote
I haven't quite figured it out yet, but I
> am stuck on the idea the Sphinx enclosure was part
> of this process before the Sphinx was carved into
> a statue.
>
>

>
> The sphinx is not essential to the Giza plan.

I did not say the "Sphinx", but rather the Sphinx enclosure.

Discussed in this thread: Anubis-Lord of the Giza Necropolis.

Further to consider for the route of Nile brought materials being to the right of the Sphinx harbor is the location of the mastaba fields, and again, the quarries: 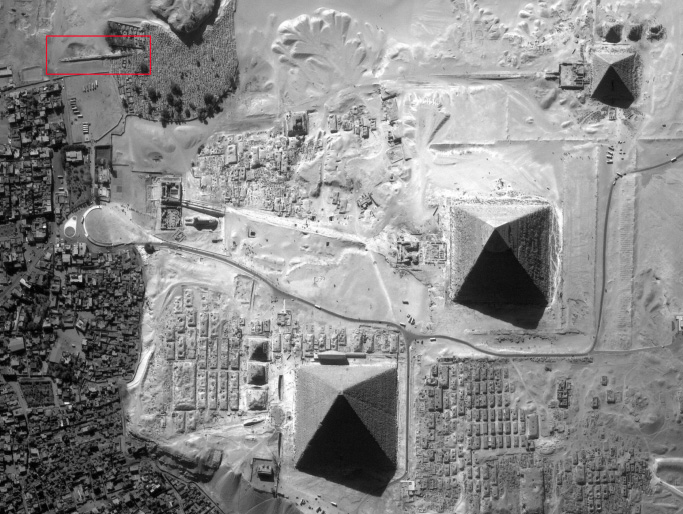 If we look between the G2 causeway and modern road we can see the outline of the G1 quarry. At some point this area was backfilled with quarry and masonry detritus. If we take the modern road as our guide for the ancient transport path from the Nile we can see that the mastabas clearly respect this path, not just to G1, but all the way to G2. What we are left with if we look above is a clear path from the harbor, really from the Sphinx enclosure where it meets the modern road, running past the quarry to a very large area of flat prime real estate which for some reason no one built anything on, yet they had no problem building mastabas everywhere else. The overwhelming majority of the mastabas are to the right side of the path and the rest, the Central cemetery, are all built off the Khentkawes harbor. This is no coincidence.

As an aside, not to confuse the issue but something else to think about, is that to follow this path led by the modern road we are taken to a large passageway between the retaining walls that leads right to G3.

At any rate, we can also see between the G3 causeway towards the pyramid and the G2 retaining wall, extending from the G2 retaining wall to G2 as well, yet another large flat area of prime real estate with no mastabas. Using G1 as our model, it makes no sense patrons of these pharaohs, whether contemporary or after the fact (5th-6th Dynasties) would avoid these prime locations, something that did not occur to the patrons of Khufu.

To makes sense of all this it is interesting to take a look at the cemetries:

The West Field (behind G1) contains many 4th Dynasty tombs, but the majority are from the 5th-6th Dynasties. Several of the 4th Dynasty tombs date to Khufu including Hemiunu. On a side note, this is a street view of several tombs supposedly built in the same era yet notice the clear difference in building style: GIS (side of G1) has several mastabas dating to the reign of Menkaure otherwise almost all from the 6th Dynasty with some from the 5th.

The East Field (in front of G1), also contains a majority of 5th/6th Dynasty mastabas with a dozen or so from various times during the 4th, mostly the reign of Khufu.

The Central Field (Khentkawes Harbor) largely dates to the reign of Khafre with several to the later 4th/early 5th Dynasties. What we can say is that these tombs were built after the G1 and G2 quarries at this site were abandoned. I would note as discussed before that there is evidence at least a few of the tombs, namely Kai and Khentkawes, predate the 4th Dynasty and quarrying activities.
Kai:

Not unexpected as the South Field as noted below contains several tombs that predate the 4th Dynasty as well. Khentkawes is thought to be the daughter of Menkaure yet there this "high rise" tomb sits untouched in the middle of G2's quarry...? Hmm. Bit of a disconnect there.

To continue, noted in the photo above is the "Menkaure Cemetery", more commonly referred to as the "Menkaure Quarry Cemetery", which are mostly rock cut tombs with some others. Not finding much info on this, but if built in the quarry used for G3 then obviously these date to sometime after the quarry was abandoned.

The South Field contains tombs from the 1st-3rd Dynasties (and a smattering from the 4th Dynasty and later) including a large palace facade mastaba (Mastaba V) dated to the 1st Dynasty reign of Den.

So, what are we to make of all this? For context, as I have noted many times before, the overwhelming majority of the tombs in these cemeteries do not date to the 4th Dynasty, but rather the 5th-6th Dynasties. Further adding to this problem is that the so-called "tombs of the pyramid builders" cemetery (not listed above) does not date to the 4th Dynasty, but rather the 5th. The so-called "Lost City", or "workers town", for one as it turns out was not for the workers after all, but also dates to the reign of Menkaure and was abandoned in the 5th Dynasty. As noted before, it is also the 5th Dynasty in which the "Pyramid Kilt Guild" first appears. As I have said before, it sure seems to me much of the evidence points to most of the work done at Giza happening at the end of the 4th through the 5th Dynasty and ending in the 6th with little being attributable to Khufu and Khafre.

Anyhoo, what we see in these cemeteries, again, is that they respect the Sphinx Harbor path: 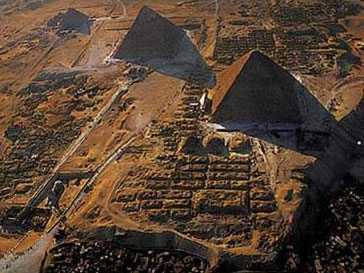 When we look at the East Field in front of G1 we are left with many questions. Though the OP argues a reason for the angle of the G1 causeway, one has to wonder what respects what-the mastaba field to the causeway or the other way around? And why put a boat pit right on the very edge of this causeway leading one to wonder again which is respecting which? And lets think about it-Khufu supposedly builds G1. Got it all planned out with mortuary temple and causeway that takes a hard angle for whatever reason. Yet he's cool with a big stupid "master planned community" built right in front of his masterpiece coming right to the edge of his causeway like a shanty town? Which includes a row of 3 100ft +/- tall pyramids that also butt right up against not just the causeway but the mortuary temple which one even partly obscures? And oh, yeah-put that boat pit right on the edge of the causeway for no apparent reason. No problem.

Also, G1 is a precision instrument and cypher of various knowledge of whose depths we have still yet to fully understand. There is no doubt the builders were keenly aware they were building something, on many levels, the likes of which the world had ever seen or perhaps ever would. And yet we are to believe it reasonable that at some point during this process "Khufu" was a-ok with sandwiching in a plot of dead man tract homes in the very front-an eye sore if there ever was one-with no relevance whatsoever if only the opposite to this magnificent geodetically and astronomically aligned precision "machine"? Something doesn't smell right here as this mastaba complex is clearly not complementary to the plan of G1, either master design or purpose, but clearly intrusive to it. The equivalent of shitting on one's beautiful new lawn and claiming the owner intended it to be there. And Khufu and Khafre said not to this but were cool if their subjects did it to Khufu?

Furthermore, we have many burials of people who lived mostly under the reign of one pharaoh buried next to the pyramid of one of their predecessors. On the surface this makes some sense as someone may have begun building their tomb under one pharoah and died under the next, but there are issues with this idea. Cemetery GIS, for example, the one right next to G1, has several large mastabas that date to the reign of Menkaure. This means that Menkaure, as king with Khufu dead when these people were children, if not before they were even born, not to mention with at least two pharaohs ruling in between, instead of being buried next the ruling king, this "god", decided instead they wanted to snuggle right up to Khufu and G1 at least a generation after the fact. This makes no sense and is an unacceptable kick in the snerds to Menkaure to see this unfolding in front of his eyes. Ingrates.

Also curious is that while Djedefre, for reasons unknown, decided to go off to Abu Roash instead of building at Giza, he was still close enough to his father to do work on his complex namely completing the boat pits among whatever else. Yet despite this, though we find subjects under all pharaohs buried next to whatever pyramid at Giza, there are none definitely attributed to Djedefre's reign? And then we have poor Shepseskaf of course that worked extensively to "finish" the work of his father Menkaure, yet decided to build a mastaba at Saqqara-nowhere near his father.