Mysteries :  The Official GrahamHancock.com forums
For serious discussion of the controversies, approaches and enigmas surrounding the origins and development of the human species and of human civilization. (NB: for more ‘out there’ posts we point you in the direction of the ‘Paranormal & Supernatural’ Message Board).
Welcome! Log In• Register
Go to: Forum Home•Board•New Topic•Search
Re: Causeways or Sand?
Author: Steve Clayton ()
Date: May 29, 2018 04:56AM
Author: Corpuscles wrote:
Date: May 29, 2018 12:51AM
Hi Steve 'n all

Firstly, I agree that given the references made in the OP of this thread, your contribution is relevant. Albeit it obviously doesn't interest some members.

Secondly, I state again I think it is praiseworthy, that after having being challenged about your funicular concept and claims, that you have sought seemingly qualified 'expert" independent advice.

Thirdly, I acknowledge you do not wish to discuss or "squabble". This is meant to be constructive especially since at present Jon E is taking some interest, so perhaps some more hope of achieving confirmation.

However , I wonder whether you have understood the significant implications of the very basic level advice you have been provided so far? (Ie Before Fabio takes you and your discussions into far more complicated aspects)

Yes, I understand the implications. If I was running from it, I wouldn't have posted it. ​You put allot of effort into your post, and I commend you for that.​

Fabio has yet to answer this, and wants to start stress calculations. I find that pointless, if my previous statements are incorrect in their current form. ​After all, it is research, is it not?​

I just watched a movie called "Secrets of the Lost". Mark Lehner was in it. They uncovered sleeping quarters for 2,000 men. Towards the end, they attempt to move 1 stone up a slight incline of sand. Using 40 men, they failed and one of the two inch ropes broke. Using wood runners, and rollers, they managed to move the stone approx. ? 20 feet. Lehner then surmises Kufu used a ramp which is 1/3 up the Pyramid, and then the remaining ramps wrapped around the Pyramid until reaching the top. If I can get a picture, I will be able to estimate the volume of his proposal. It appeared to be ​near ​1/2 of the Pyramid build.

To me, that is to small of a labor force, to long of a haul for 40 men to accomplish. At that rate, there is no way they moved 2,300,000 stones up and into place. They continue to push this narrative, which doesn't add up. I am sure you will agree. If not, please show me how. A 20 year time frame is usually used.

I originally, moved water up the face of the Pyramid, by using only the weight of the man. A small shaduf style mechanism. A man stepping out, and being heavier, lifting the bucket of water higher. Even if they dipped and poured water in line, from one section higher into the next, it is more productive than trying to make the "stone puller" myth work. I will be happy to go over those numbers. 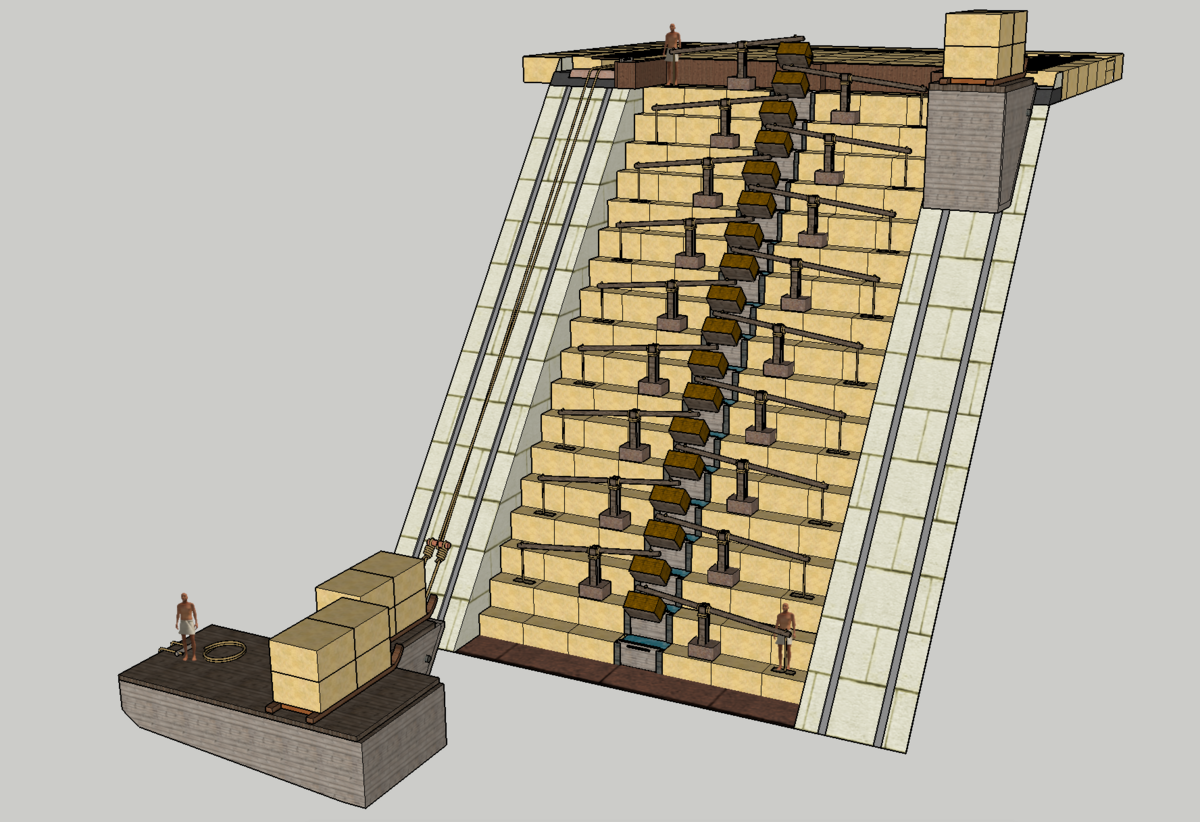 So where does this leave us? You are possibly OK with pulling stones. There is a Causway there, which by any measure, would be better than pulling stones around without it. If the rope which is pulling the stone up on the causway, made a 180 pivot turn, and returned to an unspecified counter balance, wouldn't that be easier to pull, as the men are pulling downhill, than a group of men out on the sand, pulling the stone up hill?

I hope I have answered your questions. Please respond in kind, and answer the above paragraph.