Mysteries :  The Official GrahamHancock.com forums
For serious discussion of the controversies, approaches and enigmas surrounding the origins and development of the human species and of human civilization. (NB: for more ‘out there’ posts we point you in the direction of the ‘Paranormal & Supernatural’ Message Board).
Welcome! Log In• Register
Go to: Forum Home•Board•New Topic•Search
Re: Causeways And The Sun
Author: Steve Clayton ()
Date: May 28, 2018 02:45PM
Hi Jon,

The following was an opening question with the Engineer to see if he was capable of solving Incline Plain relationships. He passed.

There ​are equations ​concerning only the causeway, and they are informative. I will post them as well asap.​ I will not be answering, and squabbling about any questions, as I need to construct a CAD drawing for a barge stress analysis. There will be plenty of time for that.

Thanks a lot for your email.

I’ve seen the exercise example you sent me, which is very straight forward.

The double ramp equilibrium can be considered in two different configurations:

1.With Friction between the boxes and the ramp

Of course the second option is just theoretical, due to the fact that it’s impossible to reach a frictionless condition unless using very high density lubricants, air cushion effects, magnetic fields etc…

I’ve considered the first option only, due to the considerations I’ve done above with regards to the friction.

Please find attached a simple powerpoint document with the solution you requested. 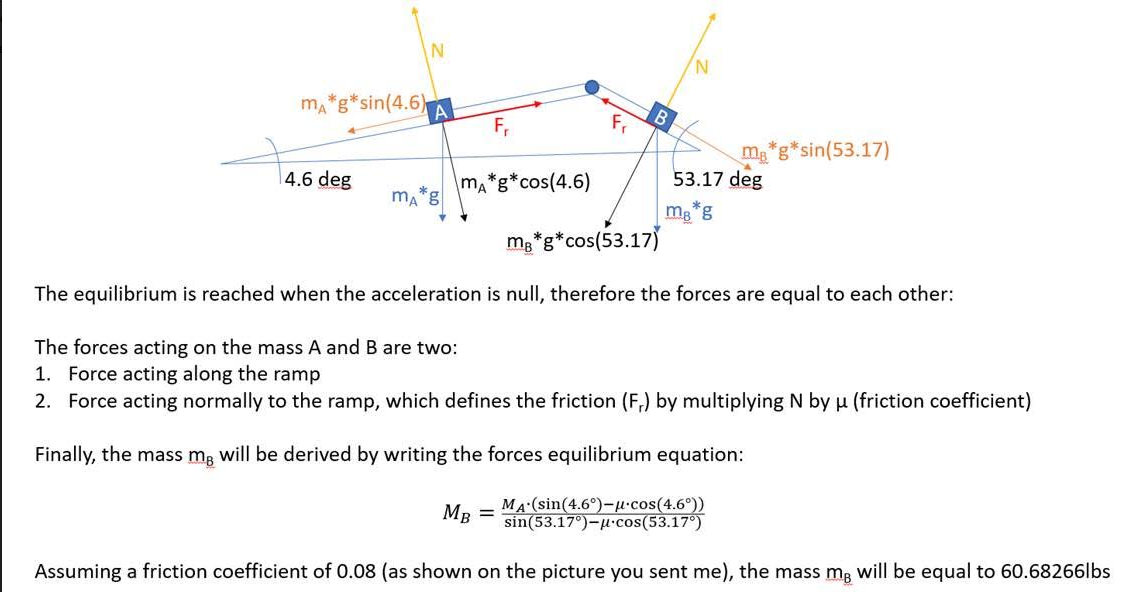 It could look very weird that a mass of only 60lbs could balance a mass of 100.000lbs, but the explanation is related to the fact that the friction component of the force generated by the mass A is more than an order magnitude higher than the weight component, therefore it takes only a small mass B to reach stable equilibrium.

Please let me know if that makes sense to you.

The linear force along the ramp changes for BOTH weights proportionally as you change the angle. This means that the ratio of the linear forces generate by each weight remains the same.

So changing the angle lessens the linear forces generated by BOTH weights proportionally.