Mysteries :  The Official GrahamHancock.com forums
For serious discussion of the controversies, approaches and enigmas surrounding the origins and development of the human species and of human civilization. (NB: for more ‘out there’ posts we point you in the direction of the ‘Paranormal & Supernatural’ Message Board).
Welcome! Log In• Register
Go to: Forum Home•Board•New Topic•Search
Re: Causeways And The Sun
Author: Barbelo ()
Date: May 28, 2018 03:54AM

Quote
I confess I have not read Robert Bauval's OCT book. Nothing of his actually but watched some lectures/docos.

However, in the cornucopia of Egyptian myth and legend is reference to a move away from a stellar cult to a solar one and the addition of Re to the names of pharaohs and that Heliopolis became the center of worship. This gives one a clue as to what may have happened.

The three Giza pyramids may be earthly representations of a certain constellation and the causeways indicate special dates as dictated by the path of the Sun. One could ask the question, "Would these two "cults" have co existed concurrently?

Which logically one could answer, "Why then, did they change?"

Therefore, the pyramids were most likely constructed first and later conveniently used as markers for the location of the causeways which were used to calibrate the movement of the Sun. Perhaps, and also quite likely, the two "cults" became integrated into one, giving rise to composite gods such as Amun/Ra - another incarnation of the ancient god, Khnum.

In later dynasties, the "cult" required observances on certain days which necessitated the use of the causeway as a Processional Way.

Again, no construction use and no funerary use. 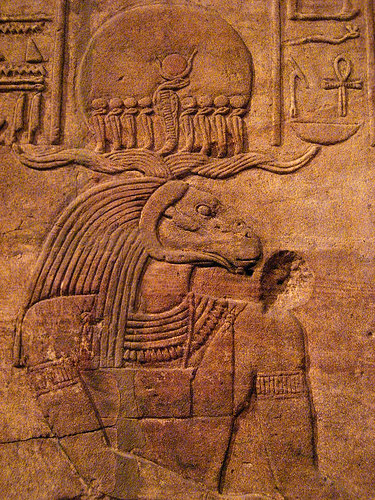 Quote
Photographic evidence. I suggest it is not impossible that the "island" and the cliff plateau drop was not joined as a gentler slope some 5000 years ago?

Possibly, even though, from an engineering perspective, grading requires less effort than fill, there may not have been much difference as the Causeway, according to Herodotus, was 1000m long which means that it extended a further 700m from the edge of the cliff out into the flood plain. It would still have been a monumental project.