Mysteries :  The Official GrahamHancock.com forums
For serious discussion of the controversies, approaches and enigmas surrounding the origins and development of the human species and of human civilization. (NB: for more ‘out there’ posts we point you in the direction of the ‘Paranormal & Supernatural’ Message Board).
Welcome! Log In• Register
Go to: Forum Home•Board•New Topic•Search
Re: Causeways And The Sun
Author: Barbelo ()
Date: May 28, 2018 12:45AM

Quote
I am not sure why you seem to think the "temples" are not contemporary with the overall complex but it makes sense that if a Nile high water harbour was close to the Sphinx then it would be likely that the most practical route for delivery of Aswan granite would be via the causeway route?


You've certainly got some engineering smarts.

Let's go back to Giza circa (take your pick).

The Giza complex is not an ad hoc, organic development. It was built to a plan. The particular alignment of the causeways proves that. Aesthetically, all three would have been built at 90 degrees to the Temple (include pyramid if you wish).

But only Menkaure was designed in that manner. There is no valid reason to offset the causeways of Khufu and Khafre approx. 14 degrees North and South of East respectively. And certainly no reason to dogleg the Khufu Causeway even further to North at the edge of the plateau.

Some other reason must explain this - the subject of the OP.

Now with your technical hat in place, would you, as Chief Engineer, construct three separate causeways from three separate harbors for the transportation of heavy materials, or one main route which led to a central depot and then to the building site?

Most of the core materials were locally sourced.

Houdin offers an alternative explanation for consideration but fails to explain the reason for the offset to South and speculates on some sort of counterweight system being used which is unproven. 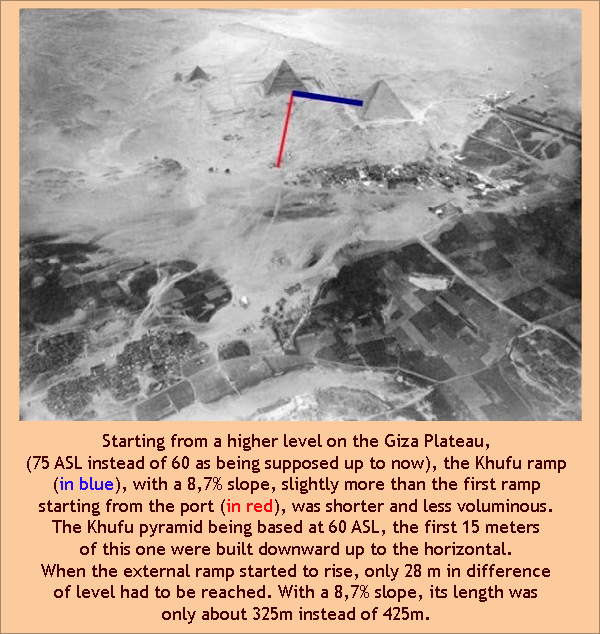 If it was possible to utilize a similar route as a more practical means of transport, why would they spend ten years building a superfluous, steeper ramp from Khufu to the North?