What is puzzling is despite this you still make these comments:

"The causeway actually ends its plateau length at the end of a cliff. Hardly practical for transportation of heavy materials or as a Processional Way."

"Or, maybe the "procession" just detoured around the boat pit after clambering up the cliff from the "Valley Temple.""

"(1) Why Khufu built his Valley Temple at the base of the cliff and not on the plateau?

(2) How did the procession ascend the cliff on their walk from the Valley Temple to the Mortuary Temple? Did they clamber up as best they could; use ropes or perhaps use a funicular (a popular theory at the moment)?"

What else could this highest point be if not the rise of the cliff face?

> Nevertheless, as you have quoted Herodotus as
> stating:
>
> "...for the length of it is five furlongs and
> the breadth ten fathoms and the height, where it
> is highest, eight fathoms, and it is made of stone
> smoothed and with figures carved upon it."
>
> Let's explore that.
>
> 3300 ft long x 60 ft wide x 48 ft high composed of
> stones leading to, as it is postulated, a Valley
> Temple.
>
> Further opinion speculates that the Causeway
> doglegs to the North at the edge of the plateau.
> This may have some basis in the 1938-39 report of
> Salim Hassan.
>
> "There are several theories as to its exact
> location, but most probably it lies under or very
> near to the old house built by Geritley Pasha some
> 75-80 years ago. At the same time, the older
> inhabitants of this village maintain that the
> causeway of the Great Pyramid ends in the fields
> to the east of the village, and one of them, whose
> family used to own and till the fields there,
> remembers that many large stones, resembling those
> of the causeway, encumbered the land in this
> place, and hindered their ploughing."
> [gizamedia.rc.fas.harvard.edu]

It's unfortunate you do not explore this source further as on p18 Hassan says:
"A drawing made by the artists of Lepsius (in 1843) shows the causeway of Khufu in a good state of preservation (Fig1)".

When we go to Fig1 on the next page we see not "just" a cliff face, but part of which is a raised slope covered in the ruins of a path of large blocks. Therefore we have both the words of Herodotus and the drawing of Lepsius to confirm, in fact, a causeway once existed extending off the cliff face which had a slope directly under it.

Near to the edge of the plateau, there is a subway passing under the causeway. It is cut in the rock and runs north-south, its ingress and exit being somewhat steep. Such subways are a regular feature of pyramid causeways, and may be seen to advantage under the causeway of the Second Pyramid and under that of Queen Khent-kawes. They served the practical purpose of providing a convenience for persons wishing to cross the Pyramid Complex without the necessity of making the long detour behind the Pyramid or in front of the Valley Temple.


Hassan is a treasure trove on information on many fronts:

A few metres north of the east-west boat discovered by Reisner, and to the east of the eastern face of the Pyramid is another such subway, cut in the rock, and lighted by a square shaft in the middle. As we see it now, it has apparently no purpose, and was never finished. According to the general idea of scholars, the plan of the Great Pyramid was twice changed, and originally it was designed on a much smaller scale. Perhaps, the unfinished subway was intended to run under the causeway of one of the earlier plans, as the rock in the area surrounding it has certainly been levelled for a considerable distance. At the edge of the plateau, near the southeastern corner of the wall surrounding the ex-royal rest-house, there is a considerable area of the surface composed of huge limestone blocks. These blocks run north-east, and descend in courses to a little less than half the height of the plateau. Were these blocks merely intended to fill in a deep crevice in the plateau (which could have been more easily and cheaply accomplished with rubble), or are they the remains of an earlier project for a causeway, of which the above-mentioned subway was part? On the other hand, they may be part of a construction ramp, demolished when the Pyramid was completed. In this connection, it is interesting to
note that although the cliff face to the south of the causeway is literally honeycombed with rock-cut tombs (in some places they are cut in tiers four deep, like modern apartment houses !), to the north of the causeway there are no tombs at all, only a few natural caves, which show no traces of ever having been used for burial. Moreover, Petrie mentions the fact that the whole of the slopes of the plateau to the north-east of the Great Pyramid are artificial, and
consist of nothing but rubble and builder's waste, among which he found ancient baskets, cordage and pieces of wood (see "Pyramids and Temples of Giza", p. 213). It is very probable that the main road which leads up to the Pyramid Plateau is nothing but the remains of one of the construction ramps, of which there must have been several, and of which the remains
of another is still existing towards the southern part of the village of Nezlit-el-Semman.

From Hassan's comments, drawings, and photos we can also see the causeway is clearly defined and separate from the boat pit in question. See Plate IV.

And as an aside, if we go to the Appendix Hassan speaks at length of examples of stone pulleys discovered.

> Further evidence may result from a "find" of the
> Valley Temple some 30 feet below the house of a
> resident of the village of El Haraneya, but
> nothing further on this "discovery" has come to
> light. If true, it would bring into question the
> height of the Causeway.
> [translate.google.com]
>
>
> Therefore, the Causeway terminated very close to A
> or B, or somewhere in between in the Google Earth
> image below.

> As of today, no evidence is available to prove
> that this enormous project ever existed.

Of course there is. From the mortuary temple to the cliff face has been verified to have existed, we can still see it today and even more so in old excavation photos, and Lespius's drawing clearly shows it extended over the cliff face part of which was not a cliff face at all in this section, but the sloping of the terrain. When we add the account of Herodotus, which as an aside numerous fragments of the reliefs he described were also discovered, there leaves little doubt the causeway existed extending over the cliff face.

From this source we can also see numerous lines of hieroglyphs including fragments that bear both full and partial examples of Khufu's names.

Plate XIII also shows the stairs leading down into the causeway boat pit I mentioned before which is a bit of a head scratcher to me.

> Nor, is
> there any evidence for the existence of the Valley
> Temple. Speculation that the Valley Temple may
> have had access to the Nile which is presently
> approx. 8000 m away needs further evidence.

Of course it is further away as it was not accessed directly from the Nile, but rather from a serious of artificial canals and harbors: 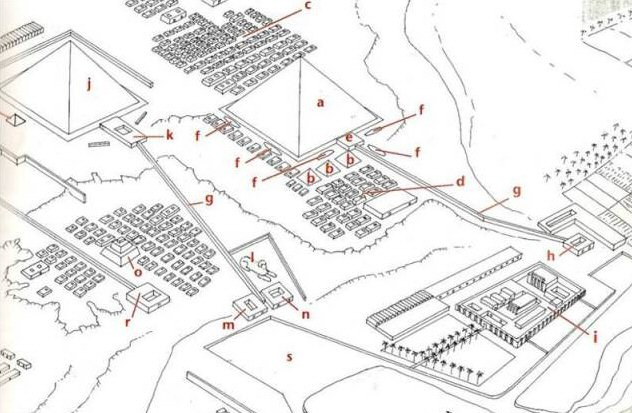 Which Lehner has recently discovered several more leading to and from the Nile to the plateau.


The harbor in front of the Sphinx, for example, was not off the Nile itself.... 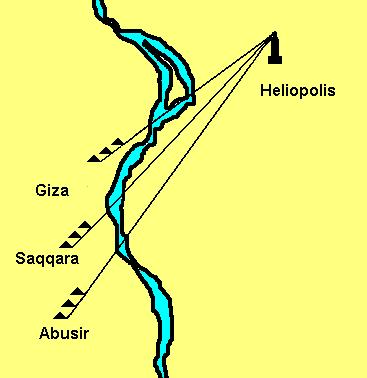