Mysteries :  The Official GrahamHancock.com forums
For serious discussion of the controversies, approaches and enigmas surrounding the origins and development of the human species and of human civilization. (NB: for more ‘out there’ posts we point you in the direction of the ‘Paranormal & Supernatural’ Message Board).
Welcome! Log In• Register
Go to: Forum Home•Board•New Topic•Search
Re: Khufu's Valley Temple
Author: Barbelo ()
Date: May 23, 2018 11:20PM

Quote
Oh, right, but we can't trust Herodotus for such things.


A puzzling comment as I have quoted Herodotus in the OP.

Nevertheless, as you have quoted Herodotus as stating:

"...for the length of it is five furlongs and the breadth ten fathoms and the height, where it is highest, eight fathoms, and it is made of stone smoothed and with figures carved upon it."

Further opinion speculates that the Causeway doglegs to the North at the edge of the plateau. This may have some basis in the 1938-39 report of Salim Hassan.

"There are several theories as to its exact location, but most probably it lies under or very near to the old house built by Geritley Pasha some 75-80 years ago. At the same time, the older inhabitants of this village maintain that the causeway of the Great Pyramid ends in the fields to the east of the village, and one of them, whose family used to own and till the fields there, remembers that many large stones, resembling those of the causeway, encumbered the land in this place, and hindered their ploughing." [gizamedia.rc.fas.harvard.edu]


Further evidence may result from a "find" of the Valley Temple some 30 feet below the house of a resident of the village of El Haraneya, but nothing further on this "discovery" has come to light. If true, it would bring into question the height of the Causeway. [translate.google.com]


Therefore, the Causeway terminated very close to A or B, or somewhere in between in the Google Earth image below. 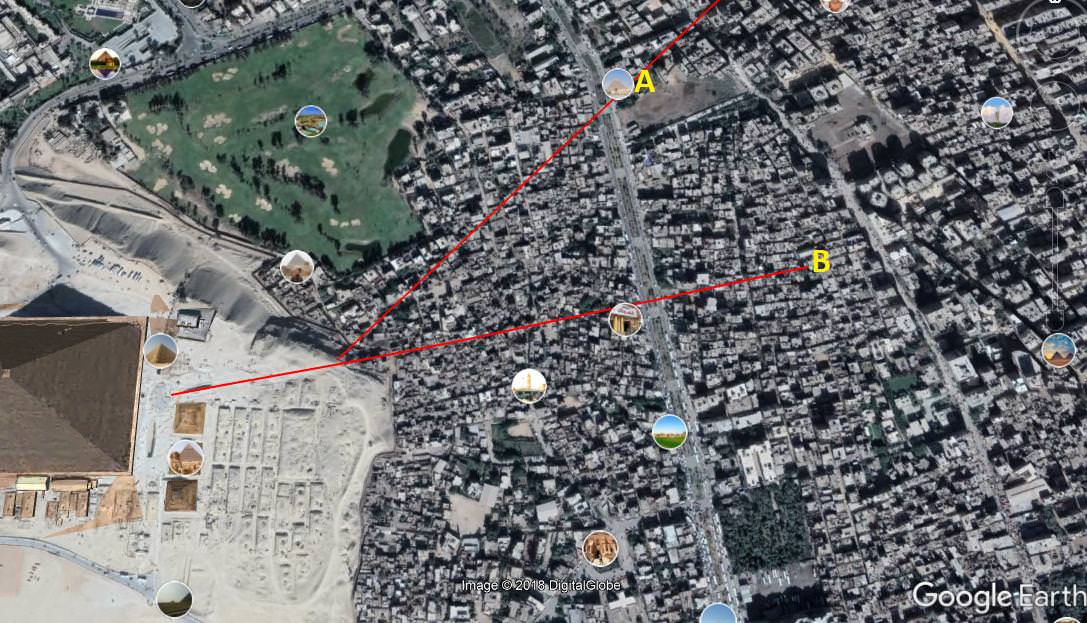 As of today, no evidence is available to prove that this enormous project ever existed. Nor, is there any evidence for the existence of the Valley Temple. Speculation that the Valley Temple may have had access to the Nile which is presently approx. 8000 m away needs further evidence.

If one continues the dogleg causeway line from the top of the plateau through the missing Valley Temple it ends up at Heliopolis. I would suggest that this is the reason for not continuing the Causeway in a straight line.

The plateau Causeway had a line of sight for a particular solar observance and the Valley Temple extension had a line of sight to now destroyed Heliopolis and the Ben Ben stone. Whatever processions that may have occurred on the Causeway were related to the Sun as a marker of time.