Mysteries :  The Official GrahamHancock.com forums
For serious discussion of the controversies, approaches and enigmas surrounding the origins and development of the human species and of human civilization. (NB: for more ‘out there’ posts we point you in the direction of the ‘Paranormal & Supernatural’ Message Board).
Welcome! Log In• Register
Go to: Forum Home•Board•New Topic•Search
Re: Khufu'S Valley Temple
Author: Thanos5150 ()
Date: May 23, 2018 02:45AM
Barbelo Wrote:
-------------------------------------------------------
> But anyway, on the subject of one's self serving
> imagination, could you, as the leading proponent
> of the Causeway As A Processional Way Theory

Am I? I thought the whole of Egyptology at large might have greater standing on the matter than I. You said:
"The argument that this causeway was a Processional Way does not pass the test of logic. "

Which I replied:
"Why not"?....
"I fail to see any reason it could not have been or was not a Processional way...". All of which translates to you to mean that I am just feeding my "self serving imagination" and am the "leading proponent of the Causeway As A Processional Way Theory"? If I didn't know better I'd say you were selling porky pies Loveritas.

I do fail to see why it was not used as a processional way unlike nearly other pyramid complex, yet this does not mean it was its original purpose, if it was originally there at all, but I certainly have no reason to doubt it was not its last purpose.

As I have noted in other threads the limestone component of the VT does not appear to me be contemporary with the granite component with the latter added perhaps much later. Also, as I have noted in other threads, there appears to be a clear disparity in the chronology of construction of the phases of the mortuary temple as well with the megalithic "front" phase being older than the back and of the same building program as the VT: 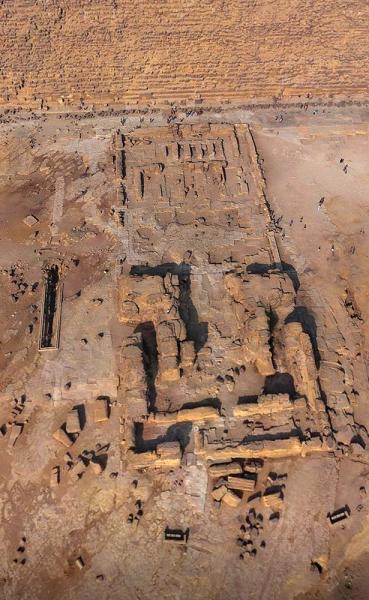 Further to consider is that, even according to Lehner, the VT was built before the Sphinx Temple which was built from blocks taken to form part of the Sphinx enclosure. So if we remove the granite component, which the sloped entrance to the causeway as shown is formed and cut through the limestone blocks which without would otherwise be a wall higher than the causeway, we are left to wonder what in fact was originally there regarding a causeway connecting the VT and the MT. 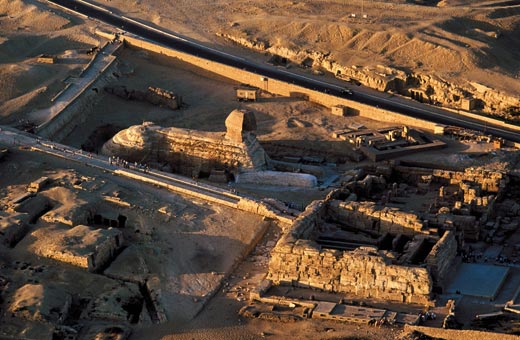 So the VT was built first and the "Sphinx side" set at an angle with if just looking at internet photos appears to be a "passageway" between the later Sphinx Temple: 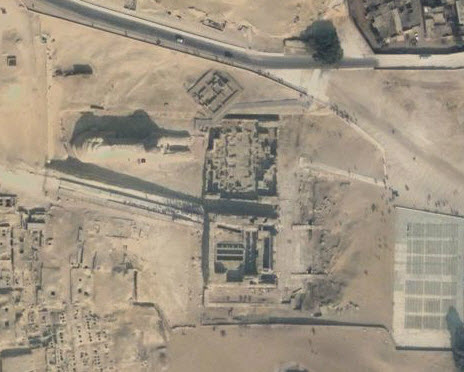 But it is not and leads directly into the embankment the causeway was made of regardless: Khafre built enclosure walls north and south of his Valley Temple. Parts of the south wall still exist, but the ancient builders removed most of the north wall.


Also as I have noted before the Sphinx temple is largely inferior in construction to the limestone component of the VT and according to Lehner the Sphinx Temple was never even finished. So what we supposedly have here, in the reign of one pharoah, is that he built the VT utilizing massive large blocks to make an enclosure wall on both sides then changed his mind and scrapped the north wall and carved out the Sphinx using the blocks to make the inferior Sphinx temple right next to the VT-a complete one off in the history of Egypt. In which no one cared about this Sphinx until the MK.

Here is an idea-when the VT and megalithic component of the mortuary temple were built there was no causeway. The Sphinx Temple was built by expanding and repurposing the Sphinx enclosure which at that time the Sphinx was carved into a statue. The causeway was built when the granite component was retrofitted to the limestone component of the VT which was made to join with the megalithic mortuary temple in which the last was to build the later "back" phase of the mortuary temple. As noted before, as seen here on the rump of the Sphinx, there are two levels to the Sphinx enclosure which the hack job lower level had to have been made to make the Sphinx meaning this was made after the VT but given the erosion the upper section was already there:

We can see in the older photo the cut in the bedrock made not only to make the Sphinx, but accommodate the Sphinx Temple: Note the angle of the VT north wall, and "passage" (enclosure wall), are not the same as the causeway.

Also, compare the erosion of the enclosure behind the Sphinx temple compared to the rest:

We see what we see today but in reality how it was not just then but during each phase, if not era, of construction was likely radically different: 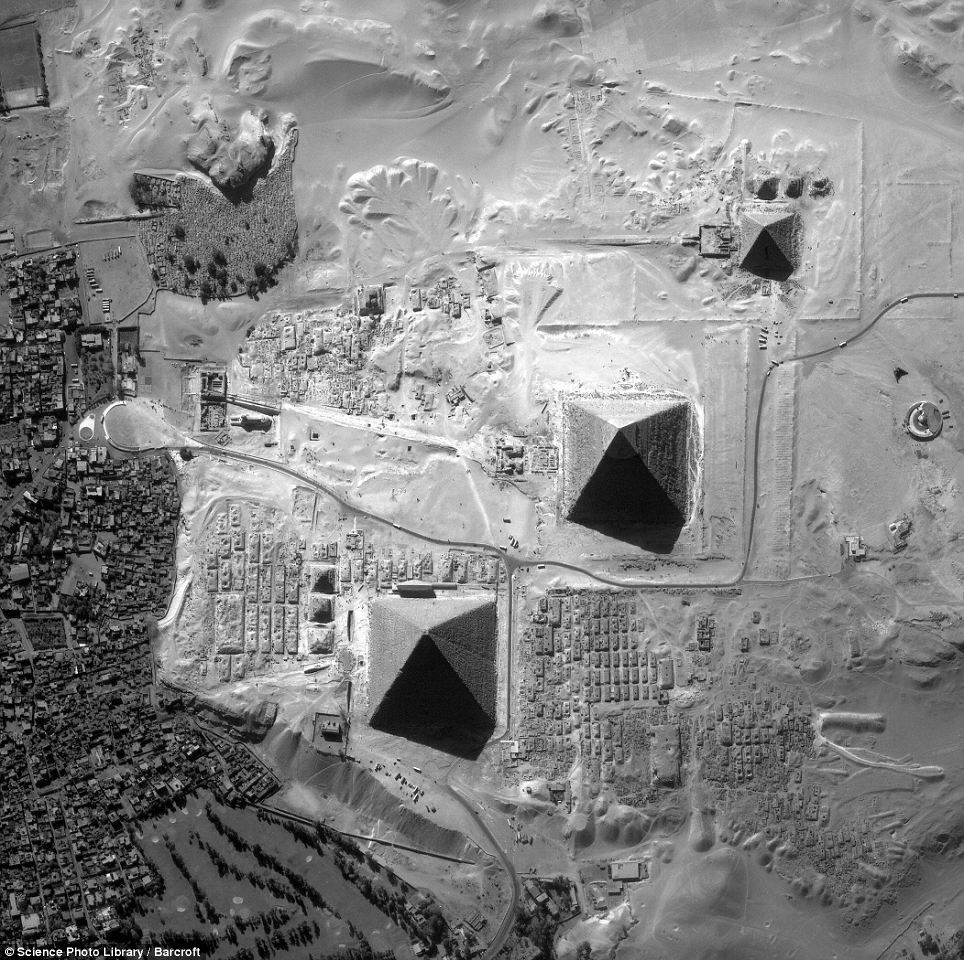 Oh, sorry. I forgot this was your thread.

> please explain to the readers (I believe that
> there are some):

So these are the questions you think I did not answer because I "could not"? Lol. Oh, wait. I forgot- you were not being honest and just said what you did in a vapid attempt to goad me into playing your silly games by appealing to my vanity. Games upon games with you.

> (1) Why Khufu built his Valley Temple at the base
> of the cliff and not on the plateau?

Probably because he did not built it on the "base of a cliff", but rather well below it.
Given the location of said cliff in relation to G1, i.e. the elevation of G1, and the Nile it would stand to reason if water way access to the VT was the goal, which it seems was the norm, it would be obvious why it was not built on the plateau.

> (2) How did the procession ascend the cliff on
> their walk from the Valley Temple to the Mortuary
> Temple? Did they clamber up as best they could;
> use ropes or perhaps use a funicular (a popular
> theory at the moment)?

How many times must you be spoon fed this information? Or are you ignoring it on purpose as usual, which unfortunately you needed to be told of such things in the first place?

Again, for your convenience:

Of this oppression there passed ten years while the causeway was made by which they drew the stones, which causeway they built, and it is a work not much less, as it appears to me, than the pyramid; for the length of it is five furlongs and the breadth ten fathoms and the height, where it is highest, eight fathoms, and it is made of stone smoothed and with figures carved upon it.


Eight fathoms would be roughly 48ft high which stands to reason "where it is highest" would be exactly where it was needed- "off the edge of the cliff".


Oh, right, but we can't trust Herodotus for such things.