Mysteries :  The Official GrahamHancock.com forums
For serious discussion of the controversies, approaches and enigmas surrounding the origins and development of the human species and of human civilization. (NB: for more ‘out there’ posts we point you in the direction of the ‘Paranormal & Supernatural’ Message Board).
Welcome! Log In• Register
Go to: Forum Home•Board•New Topic•Search
Re: Red Pyramid Causeway?
Author: Thanos5150 ()
Date: May 19, 2018 02:46PM
Thanos5150 Wrote:
-------------------------------------------------------
> Regardless, the mud brick complex predates the BP
> Valley Temple and would have been logically
> incompatible with a construction funicular
> causeway if it had existed prior to the VT as some
> here have hypothesized.

It should be noted again that the BP VT is replete with reliefs of estate and Sed festival scenes, no different than from the 5th Dynasty onward, but completely lacking in the temples of G2/G3 at Giza.

This mud brick complex raises interesting questions as to the chronology supposedly established for Sneferu and the pyramids Meidum, BP and RP. So Sneferu starts plugging away on Meidum and at this time the town at Dahshur was being established or perhaps was already there, in which Sneferu decides to build a large elaborate garden complex right on the very spot he would later build the stone valley temple of his next pyramid project? I guess we need to wait for further excavation details but something smells funny to me here.

And as an aside, given the mud brick structure is older than the stone valley temple, i.e. was built over parts of it, we can therefore be certain the builders of the stone temple came after the builders of the mud brick garden complex. Then we have all of the very Egyptian reliefs carved all over the walls and pillars having all to do about this king, Sneferu, all told we can be certain this VT of the BP was built by these very Egyptians and not some lost civilization tens of thousands if not millions of years ago.

And as noted in Troubles with the 2nd Dynasty:

There are also 3 large underground complexes there believed to date to the 2nd Dynasty as well which the largest is thought to belong to the 1st pharaoh of the 2nd Dynasty, Hetepsekhemwy, that kinda reminds one of "Khasekhemwy", which the 5th Dynasty king Unas built his pyramid right over the top of it: 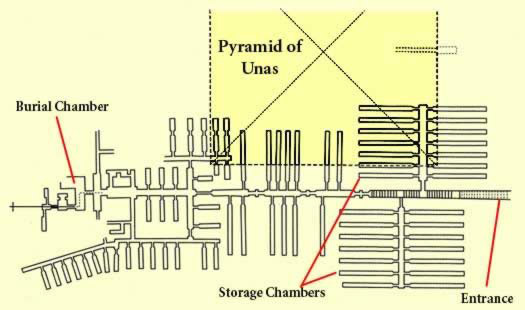 So we can chalk this pyramid, pyramid complex, and causeway up to Egyptian and not LC builders as well.