Mysteries :  The Official GrahamHancock.com forums
For serious discussion of the controversies, approaches and enigmas surrounding the origins and development of the human species and of human civilization. (NB: for more ‘out there’ posts we point you in the direction of the ‘Paranormal & Supernatural’ Message Board).
Welcome! Log In• Register
Go to: Forum Home•Board•New Topic•Search
Re: Nahal Mishmar Metallurgical Hoard, Levant c.3500BC-Egypt Connection
Author: Thanos5150 ()
Date: May 15, 2018 11:55PM
Thanos5150 Wrote:
-------------------------------------------------------
> I see no reference that the Cucuteni–Trypillian
> used lost wax casting. The dating for this culture
> seems a bit open ended, but the middle-end of the
> Cucuteni–Trypillian cultural phase in particular
> c.4800-3000BC is quite interesting though.
> Thousands of structures with population centers
> estimated as large as 40,000+ inhabitants with
> several sites 10,000 or more. Some sites had over
> 1600 structures alone.

A follow up to this is that the Cucuteni–Trypillian are related to the earlier Vinca and the contemporary Varna cultures, the Danube cultural sphere at large, which also share curious similarities with the Mesopotamia Ubaid including distinctive proto-writing characters. In previous discussion I noted the origin of the Ubaid was trending archaeologically towards a northern, not southern origin, which if we take the 6th-4th millennium at large, what takes shape is a very large and complex interconnected cultural/trade sphere that seems to have originally radiated outward from the coasts of the Black Sea largely directed southward.

Looking at the map above we are presented we an even greater situation as during this period what we have are two dominant spheres of influence-the megalithic builders of the Western Mediterranean sphere and the Near East sphere which includes for this purpose Eastern Europe: 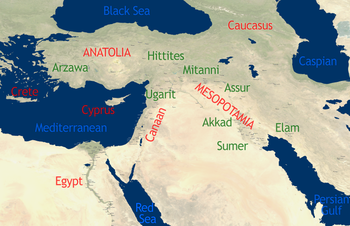 Looking at the cultural remains they are much different with in many ways the NES being the more "advanced", yet the WMS the great megalithic builders capable, among other things, of moving stones as much as 400 tons 60 miles as early as the the 5th millennium. At some point these cultures must have met, as explored here: Megalithic Strangers Passing in the Night.