If you have linked to it. Oh, you won't - telling whoppers again.
>
>
> Hanslune had the red line right but then he
> changed it when I told him he had it right.

Dude it didn't goto the pyramid. 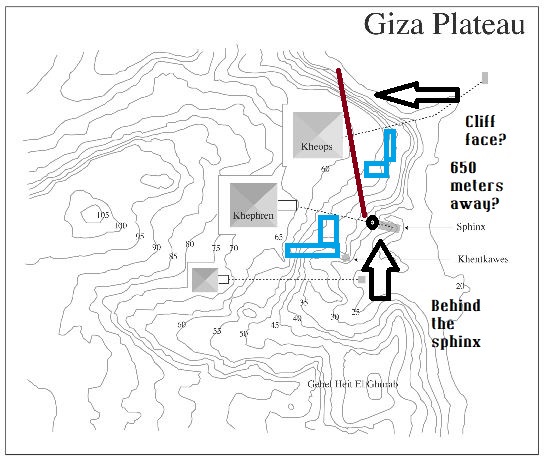 You remember saying, several hundreds times, that it ran straight up the side......... It don't.
>
> The primary funicular run that supplied about 60%
> of all the stone for G1 ran N/ S just to the east
> of the so called queens pyramids. A slight dogleg
> appears to have been added on the south end as the
> project dragged on. This dogleg was to the west.

Its funny how you pontificate like you were there or had any evidence of this...lol

Cladking we are all aware you are making this all up...

> It is pictured below. It is clearly delineated
> by a canal that Petrie called the NNE canal that
> led from the basalt pad to the intersection of the
> canal and funicular run.

No it doesn't - why don't you link to what Petrie actually said? You refuse? Why is that?

The counterweight ran
> due north down the cliff face alone this straight
> run.

The cliff face there would be at an angle - read the map Cladking.

> The run is marked below the causeway by a
> "ramp" leading to the east side of the main
> quarry.

Yeah a ramp one of the things you've been screaming, like a 2 year old, for 10 years - that they don't exist. Do you feel foolish now?

It is also marked by debris at the bottom
> of the cliff face.

REALLY? Lets see them Cladking along with a paper explaining all about them.

Pssst that quarry was for G2 - if it wasn't what were the quarries to the east of G1 for?? Do a volume calculation not enough volume for G1 and G2.

Make up something fast.

> It's terminus was behind the
> Sphinx before being moved ~ 70' to the west as the
> quarry played out. This was what I call the
> eastern cliff face counterweight run.

You should call it the fail funicular.

The stones were then dumped on the ground - so how did they get up the pyramid?

> It was a
> linear funicular. The water went down the cliff
> face and pulled trains of stone up from the
> quarry.

No the site YOU picked behind the Sphinx is a 100-125 meters from the quarry - you should actually look at the map Sam.

> The empty counterweight was usually reset
> by a sail operating in the northern "boat pit".

Really so how big does a sail have to be to move - up a steep cliff face a 'boat' that weighs how much? Lets see the math and diagrams - of course you don't have those having no need for real information - why such a ponderous and ridiculous method? Why not just fill the other boat with water?
>
> The western cliff face counterweight was even more
> important to construction.

While it pulled fewer
> stones it raised their elevation much more and was
> of critical importance in the early stages. It is
> located at the bottom of the NE canal almost
> exactly at the NE corner of the pyramid.

Then its not the western cliff face ? What

It
> actually ran straight over the the the growing
> pyramid base. It ran NNE to SSW nearly.

So it ran up hill huh? Did they have anti-gravity?


Its
> southern terminus was the western side of the
> quarry and where it passed over the south side of
> the pyramid can be seen today about 60' east of
> the west side of the Boat Museum.

Link? Have done any real science and linked up all these things you say are 'relics'?

This is a
> vertical line that appears etched deeply into the
> pyramid and was created by the funicular run being
> the last stones laid on each course. stones had
> to be pieced in rather than run as masons
> typically work.

It is also marked by debris at the
> base of the cliff face.

Vertical lines in the
> great pyramids were all caused by this same
> process.

It is also marked by a reshaping of the
> cliff face.


>The natural cliff face had the wrong
> configuration to support a counterweight run so
> they added fill to reshape it.

> These funicular runs had little to do with lifting
> stone though.

What? These were kids rides or what?

They were critically important
> because they needed the work of 20 acre feet
> falling from the pavement down the 120'+ cliff
> face. This was actually more work than the 18
> acre feet that fell from 81' 3" on the north side
> near the center line.

This water was captured to
> run in the pyramid counterweights which were also
> linear funiculars. There were primary
> counterweight on the north and west sides.

You have no funiculars on the west side? You do realize this is all a big mess in your head - and why you don't put it on map - even you know its soaked in silly sauce. Look at the map Cladking there's a ridge line to the west.


The
> west side counterweight lifted the stones that
> came from the masons shop on the east side. A
> rope was simply strung across the top and
> connected to the stones on the bottom of the east
> side.

You've given enough clues for only two funiculars: 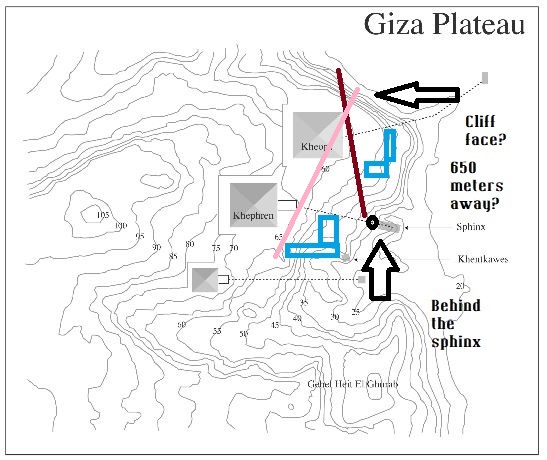