Mysteries :  The Official GrahamHancock.com forums
For serious discussion of the controversies, approaches and enigmas surrounding the origins and development of the human species and of human civilization. (NB: for more ‘out there’ posts we point you in the direction of the ‘Paranormal & Supernatural’ Message Board).
Welcome! Log In• Register
Go to: Forum Home•Board•New Topic•Search
Case for an Older Baalbek
Author: Thanos5150 ()
Date: April 11, 2018 06:04AM
1 Kings 7 King James Version (KJV):

Solomon Builds His Palace:
7 It took Solomon thirteen years, however, to complete the construction of his palace. 2 He built the Palace of the Forest of Lebanon a hundred cubits long, fifty wide and thirty high,[a] with four rows of cedar columns supporting trimmed cedar beams. 3 It was roofed with cedar above the beams that rested on the columns—forty-five beams, fifteen to a row. 4 Its windows were placed high in sets of three, facing each other. 5 All the doorways had rectangular frames; they were in the front part in sets of three, facing each other.

6 He made a colonnade fifty cubits long and thirty wide.[c] In front of it was a portico, and in front of that were pillars and an overhanging roof.

7 He built the throne hall, the Hall of Justice, where he was to judge, and he covered it with cedar from floor to ceiling.[d] 8 And the palace in which he was to live, set farther back, was similar in design. Solomon also made a palace like this hall for Pharaoh’s daughter, whom he had married.

9 All these structures, from the outside to the great courtyard and from foundation to eaves, were made of blocks of high-grade stone cut to size and smoothed on their inner and outer faces. 10 The foundations were laid with large stones of good quality, some measuring ten cubits[e] and some eight.[f] 11 Above were high-grade stones, cut to size, and cedar beams. 12 The great courtyard was surrounded by a wall of three courses of dressed stone and one course of trimmed cedar beams, as was the inner courtyard of the temple of the Lord with its portico.


Given very similar massive megaliths are found at the Temple Mount in Jerusalem, also attributed to Solomon, it seems very likely they are reffering specifically to Baalbek. As far as the dating of the writing of the Book of Kings, scholars apparently agree at the very least that it dates to the 6th century BC, i.e. a few centuries before the site was occupied by the Romans and roughly 500yrs before the building for the Temple of Jupiter.

Remains of pre-Roman monumental construction were found in excavations under the Roman floor level of the Great Courtyard in the time of French and Lebanese works in Baalbek7. Current survey and interpretation show, that a pre-Roman floor level about 5m lower than the late Roman Great Courtyard floor existed underneath the later eastern courtyard. The features include a freestanding podium monument, and an earlier stair flight, both suggesting an earlier sanctuary entrance. Furthermore, the foundation wall underneath the peristasis of the early imperial pseudodipteral temple could be proven to be of pre-Roman date. This formerly T-shaped terrace was already a gigantic construction, at least five meters higher than the Tell and any platform construction. Due to the lack of remains of temple architecture, it can be assumed
that the temple that this terrace was built for was never completed or entirely destroyed before any new construction started (fig. 2)....

The unfinished pre-Roman sanctuary construction was incorporated into a master plan of monumentalisation. Apparently challenged by the already huge pre-Roman construction, the early imperial Jupiter sanctuary shows both an architectural
megalomaniac design and construction technique in the first half of the first century AD. The most famous example may be the trilithon forming the middle layer of the western temple podium by three blocks of 4 by 4 by 20 meters size. The podium can be considered as an attempt to hide the older, inconveniently shaped temple terrace behind a podium in fashionable Roman manner8, consisting only of three layers of masonry at the height of twelve meters. Just in front of it, the new sanctuary design created a partly two storey platform of about 100 x 120 meters, embraced by two low walled courtyards to the east and west. The temple itself, located on its giant podium inside the western court, was nearly finished in the year 60 AD, as an inscription proves9.

So, we have at least one source that predates the Romans alluding to massive stone construction at what we assume to be Baalbek, known in the Bible as "Balaath" according to some scholars, and archeology that confirms the existence of pre-Roman monumental architecture under Roman foundations.

Quoting myself regarding the Mesopotamian tale, the Epic of Gilgamesh:

The Epic dates to at least 2100BC and if scholarly opinion is taken at face value Gilgamesh ruled sometime between 2500-2800BC. Regardless, this tale well predates the Romans at Baalbek by at least 2,000yrs.

It was then that the lord Gilgamesh turned his thoughts
to the Country of the Living; on the Land of Cedars the
lord Gilgamesh reflected. He said to his servant
Enkidu, 'I have not established my name stamped on
bricks as my destiny decreed; therefore I will go to the
country where the cedar is felled. I will set up my
name in the place where the names of famous men are
written, and where- no man's name is written yet I will
wise a monument to the gods. Because o£ the evil that
is in the land, we will go to the forest and destroy the
evil; for in the forest lives Humbaba whose name is
"Hugeness", , a ferocious giant.


The "Land of the Cedars" is of course Lebanon (Byblos).

They go to the cedar forest:

...The way was broad and the going was good. They gazed at the mountain of
cedars, the dwelling-place of the gods and the throne of Ishtar.

...For as far as two leagues the cedars shivered when Enkidu felled the watcher of the forest, he at whose voice
Hermon and Lebanon used to tremble. Now the mountains were moved and all the hills, for the guardian of the forest was killed. They attacked the cedars, the seven splendours of Humbaba were extinguished. So they pressed on into the forest bearing the sword of eight talents. They uncovered the sacred dwellings of the Anunnaki and while Gilgamesh felled the first of the trees of the forest Enkidu cleared their roots as far as the banks of Euphrates.

And where and what would these "sacred dwellings of the Anunnaki" in Lebanon be?

So, to the Mesopotamians of at least 2,100BC, speaking of a time at very least between 2500-2800BC, Byblos was the "the dwelling-place of the gods and the throne of Ishtar" where can be found the "sacred dwellings of the Anunnaki". Given the even longer history of interaction between Mesopotamian and Byblos, not to mention Egypt, which dates back well over 1,000yrs before even Gilgamesh's time, it stands to reason such a perception of Lebanon as being a home of the Gods dates much farther back than either of these dates. And lo and behold there in the land of the cedar forest, the home of the Gods, we find Baalbek.


Personally, I do not believe Solomon built the foundations of either site, but rather built on top of sites known to be considered sacred long before.

Of note here as well is that the neolithic site Tell Baalbek in which the complex is located dates as far back as c. 8,000BC. According to recent excavations (quoting Lohmann I presume, but again for clarity):

It had long been suspected that the temple of Jupiter in Baalbek was erected on an ancient tell. Recent cleaning operations in the deep trench in the courtyard of the Jupiter temple have produced evidence for occupation levels ranging from the Pre Pottery Neolithic to the Iron Age. Among the ﬁnds are several sherds which undoubtedly have to be placed in the Early Bronze Age IV [c. 2400-2000BC], such as the spout of a teapot. 18 Unfortunately no architectural remains from this period were uncovered.

REFLECTIONS ON THE EARLY BRONZE AGE IV IN LEBANON

The Temple of Jupiter is the temple that sits above the Trilithon.

I'm not sure exactly what he is reffering to regarding the deep trench of the courtyard, but I wonder if it is this, the lower area on the side: 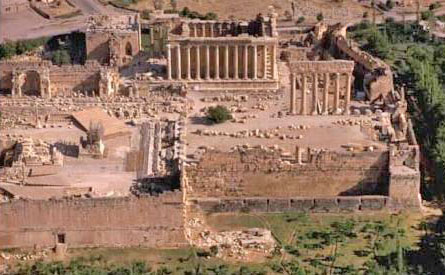