Mysteries :  The Official GrahamHancock.com forums
For serious discussion of the controversies, approaches and enigmas surrounding the origins and development of the human species and of human civilization. (NB: for more ‘out there’ posts we point you in the direction of the ‘Paranormal & Supernatural’ Message Board).
Welcome! Log In• Register
Go to: Forum Home•Board•New Topic•Search
The Zeroth Ordinal
Author: Dr. Troglodyte ()
Date: February 16, 2018 12:18AM
Consider: 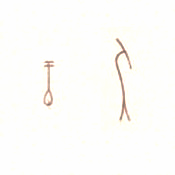 nfr and was-scepter
from Campbell’s Chamber after J. S. Perring 1837


”In the following reign of Khufu, the gang seems to have been the most important unit of organization. The texts inscribed on the walls of the relieving chambers of the Great Pyramid name three gangs, each based on a different form of the king’s name. Seven blocks give a gang name based on his Horus name, Ḥr-Mḏdw; ten give a name based on the full form of his nswt-bjtj name, Khnum-Khufu; and two blocks give a name based on the abbreviated form of that name, Khufu. A few of these texts may contain traces of a phyle name followed by a division mark, but the signs

, which occur frequently, cannot be division marks, as they occur with more than one gang. They probably indicate the orientation of the blocks or some other aid to construction.” – Egyptian Phyles in the Old Kingdom The Evolution of a System of Social Organization, Ann Macy Roth.

”The same nfr symbol appears in a series of drawings of some Old Kingdom constructions. For example, in the construction of Meidun [sic] Pyramid, it appears as a ground reference point for integral values of cubits given as “above zero” (going up) and “below zero” (going down). There are other examples of these number lines at pyramid sites, known and referred to by Egyptologists early in the century, including Borchardt, Petrie, and Reiner, but not mentioned by historians of mathematics, not even Gillings (1972), who played such an important role in revealing the treasures of Egyptian mathematics to a wider public. About fifteen hundred years after Ahmes, in a deed from Edfu, there is a use of the “zero concept as a replacement to a magnitude in geometry,” according to Boyer (1968, p. 18). Perhaps there are other examples waiting to be found in Egypt…” – The Crest of the Peacock: Non-European Roots of Mathematics, George Gheverghese Joseph.

”In building construction, horizontal leveling lines were used to guide the construction of pyramids and other large structures. These massive stone structures required deep foundations and careful leveling of the courses of stones. One of these leveling lines was used as reference for other levels, and was labeled "nfr," or "zero." Other horizontal leveling lines were spaced 1 cubit apart and labeled as "1 cubit above nfr," "2 cubits above nfr," or 1 cubit, 2 cubits, etc. below nfr. Thus, zero, in this case, was used as a reference for a system of directed or signed numbers. A number of these examples are still visible - on the Great Pyramid of Giza in 1931.” – MATHEMATICIANS OF THE AFRICAN DIASPORA, Dr. Scott W. Williams, The Mathematics Department of The State University of New York at Buffalo.

At a minimum the nfr numbers (and likely the was-scepter number) are referenced from a datum point employed in locating the placement of these certain stones.