Mysteries :  The Official GrahamHancock.com forums
For serious discussion of the controversies, approaches and enigmas surrounding the origins and development of the human species and of human civilization. (NB: for more ‘out there’ posts we point you in the direction of the ‘Paranormal & Supernatural’ Message Board).
Welcome! Log In• Register
Go to: Forum Home•Board•New Topic•Search
Re: Rotated (or horizontal) numerals in Campbell’s Chamber
Author: Martin Stower ()
Date: February 14, 2018 02:50PM
Scott Creighton Wrote:
-------------------------------------------------------
> SC: All I ask is that we see somewhere
> outside the Vyse Chambers an ordinal 'n' on its
> side (that is clearly NOT a date) and which is
> contemporary with the early Old Kingdom period.
> There must be an abundance of such examples - I
> looked but couldn't find any. Finding just one
> clear, unambiguous example (that is NOT a day of
> the month) can't be too much to ask for, now can
> it?
>
> Clearly it IS too much to ask. Which means that
> the ONLY place where examples of these allegedly
> sideways numbers actually exist is in the Vyse
> Chambers. It's almost like the Vyse Chambers are
> some strange quantum vortex of time and space
> where normal rules for things are bent or simply
> do not apply.
>
> I do not accept your argument. As I said to you
> previously, in my view there's a much simpler
> means to explain these anomalous numbers. But
> thanks for your time.

Clearly it’s too much to ask where Vyse is supposed to have seen dates written in old hieratic. You’ve merely dodged that question (in the post to which you’ve replied). Was it in that convenient secret cache? Fine. There’s an “abundance” of the examples you keep asking for. They’re in a secret cache also. This to remind you of your barefaced double-standard. You make up inscriptions when you need them.

Not playing your game, Creighton. I’m not allowing you to frame the discussion with your arbitrary stipulations.

It’s perfectly clear from such an example as this:

as the character for the number 10 and a fortiori would have no trouble reading these:

It’s also perfectly clear from examples in Abusir II: Baugraffiti der Ptahschepses Mastaba (and they are examples of dates) that there is nothing wrong with the position of the tens relative to the units.

As far as the units are concerned, the question is entirely settled and uncontroversial. We have such things as this (which you tried to get round with flummery handwaving): All you’re left with is your bonkers insistence that

outside the context of a date requires “some strange quantum vortex of time and space where normal rules for things are bent or simply do not apply” to accommodate it. I concede that the quoted phrase may be a fair description of your inner life.

Back to my question. Here is a carved, hieroglyphic calendar: 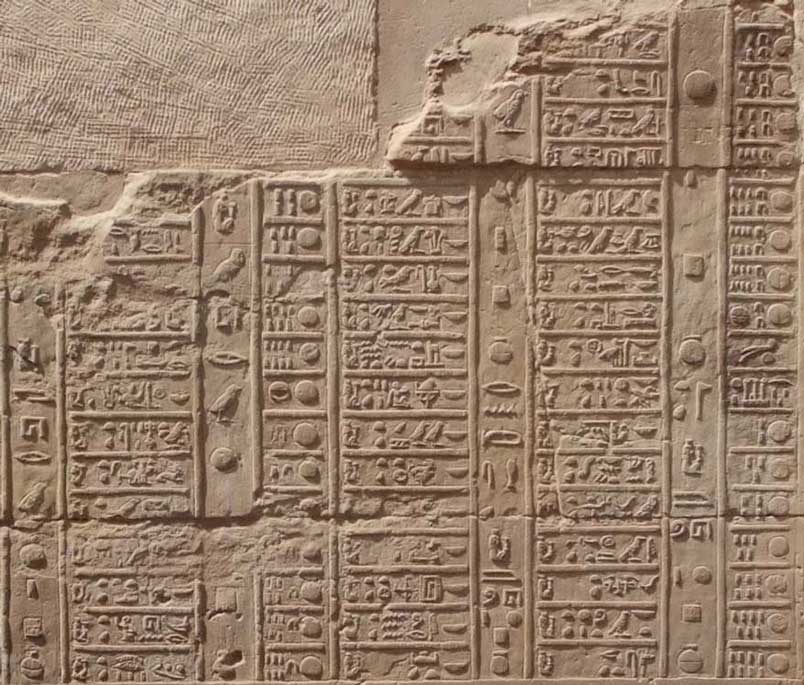 We see that the numerals (days of the month) are in their more usual (vertical) orientation. Clearly Vyse could not have got the idea from here. So where?