Mysteries :  The Official GrahamHancock.com forums
For serious discussion of the controversies, approaches and enigmas surrounding the origins and development of the human species and of human civilization. (NB: for more ‘out there’ posts we point you in the direction of the ‘Paranormal & Supernatural’ Message Board).
Welcome! Log In• Register
Go to: Forum Home•Board•New Topic•Search
Re: Location of the Great Pyramid Capstone underneath Oak Island
Author: cladking ()
Date: March 15, 2018 04:38PM
Manu Wrote:
-------------------------------------------------------
> Not sure if anyone already answered your question.
> Here is Robert in his own words
> =http://disinfo.com/2013/06/the-mystery-of-the
> -missing-pyramidon-of-khufu-by-robert-bauval/]Bauv
> al-Cap stone

But two questions now must be also considered. For if indeed the pyramidion represented the form of the king as a star, then what could possibly have given the ancient Egyptians the idea that a star had the physical shape of a ‘pyramid” and, furthermore, that it was composed of very hard “black stone” such as black granite?


"Imperishable stars" was a phrase used to describe the water droplets that formed the rainbow with which the dead king was adorned.

The pyramid was formed inside the "raindrops" that created the rainbow. The color red is formed at "exactly" the same angle by the droplet as the angle of the pyramid down its corners. 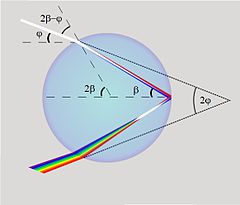 The color red by the secondary rainbow is at 52 degrees which again is "exactly" the angle down the side of the pyramid.

Modern science tells us that everything from granite to air is mostly empty space. A water droplet is not "hard" but it always reflects light the same way. It follows the same laws as granite, thin air, and dead kings.