Mysteries :  The Official GrahamHancock.com forums
For serious discussion of the controversies, approaches and enigmas surrounding the origins and development of the human species and of human civilization. (NB: for more ‘out there’ posts we point you in the direction of the ‘Paranormal & Supernatural’ Message Board).
Welcome! Log In• Register
Go to: Forum Home•Board•New Topic•Search
Re: Connection Between the 5th Dynasty and the Levant
Author: Thanos5150 ()
Date: December 22, 2017 11:36PM
Thanos5150 Wrote:
-------------------------------------------------------
> I recently wrote about how
> the beginnings of the MK, a time of profound
> change and revitalisation in Egypt, were deeply
> rooted in direct connection with Canaan (Levant)
> in which in the 13th Dynasty Canaan even took over
> the Nile Delta and formed their own kingdom.
>
> HERE 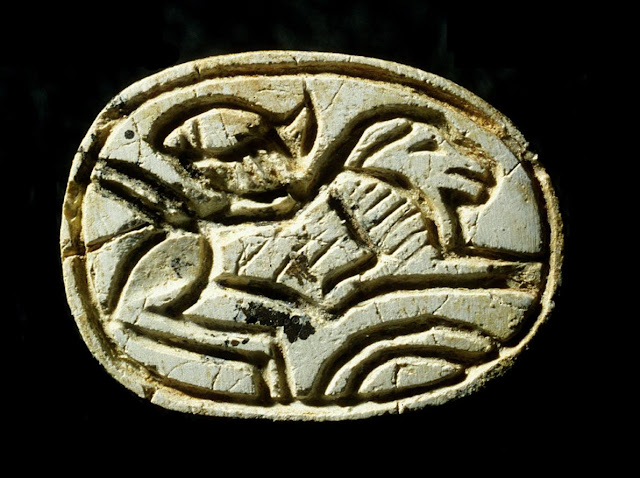 The Egyptian scarab found on the chest of the young girl depicts a crouching lion and the sun rising over a hill. "The child was adorned with jewelry, including two stone scarabs – one which contained hieroglyphics that may have included the name of the city’s ruler."

Also from these recent discoveries:

The powder found in the mother of pearl shells likely came from mines known to have been used by the ancient Egyptians, according to National Geographic. This indicates the city had important connections long before its destruction.

‘The discovery confirms a close commercial relationship, already in the early third millennium BC, between the ancient city in Palestine and Egypt,’....