Mysteries :  The Official GrahamHancock.com forums
For serious discussion of the controversies, approaches and enigmas surrounding the origins and development of the human species and of human civilization. (NB: for more ‘out there’ posts we point you in the direction of the ‘Paranormal & Supernatural’ Message Board).
Welcome! Log In• Register
Go to: Forum Home•Board•New Topic•Search
Qasr el- Sagha, Polygonal Masonry, Bosses, Columns and Chronology of Construction
Author: Thanos5150 ()
Date: September 12, 2017 02:00AM 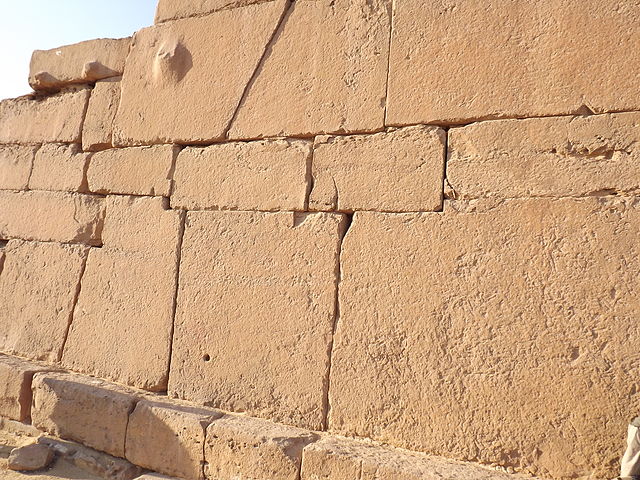 In its architecture we can see the unique use of polygonal masonry, curved joints, and lifting bosses all very similar to its uses at Giza and the Osirion, apparently not lost on others as well.

Built on the ancient shoreline of Lake Moeris (Lake Qarun): 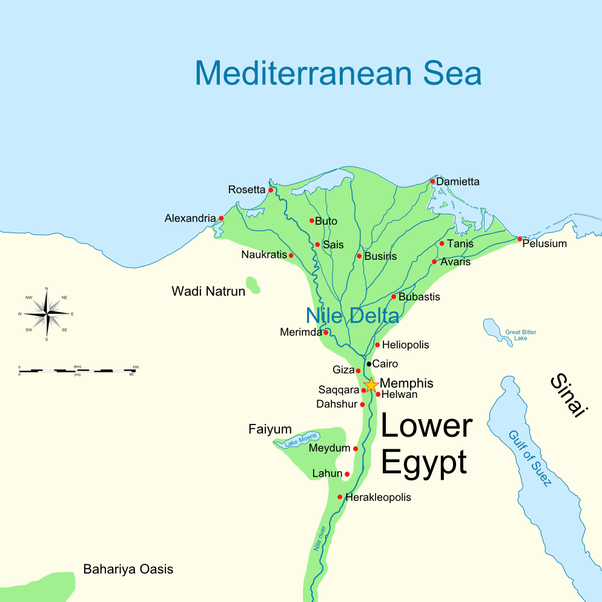 Originally discussed HERE, but worthy of more consideration.
Some links with images:
Isida Project
THE INCOMPLETE TEMPLE OF SOBEK
Qasr el- Sagha
According to Megalithic Portal:

The date of the temple is a source of debate among scholars, but its plan suggests that the structure was built no later than the Middle Kingdom. It’s architecture, however, was interpreted by early explorers as being in the style of Old Kingdom structures, possibly putting it somewhere in the range of 2125-1570 BC.

The temple was constructed of huge calciferous sandstone blocks of different sizes, which fit tightly together without the use of mortar and with oblique corner joints, similar to the Valley Temple at Giza or the Oseirion at Abydos.

The temple was never completed and the walls were left undecorated. The interior contains a hall with seven small chambers and two side rooms....


All told we are left to wonder as did early explorers if this is in fact an Old Kingdom or earlier construction.

Granite interior temple clads the limestone and is set much lower than the outer limestone behemoths: 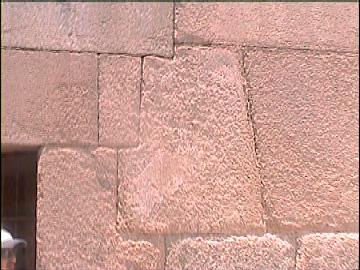 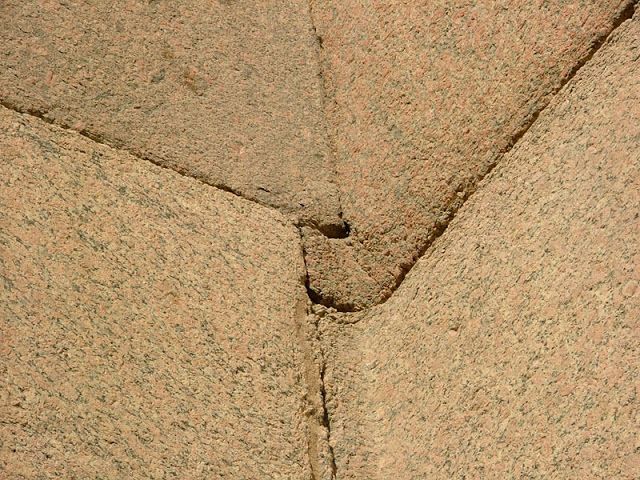 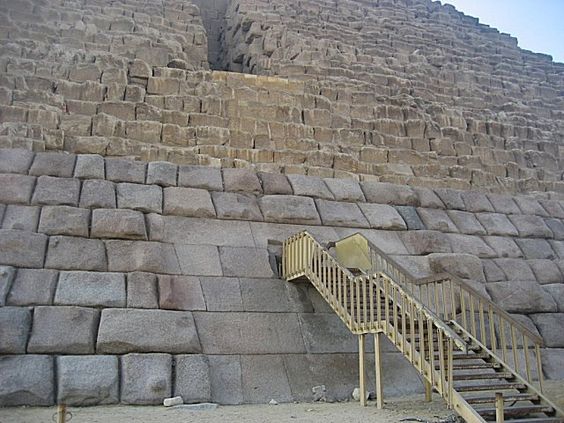 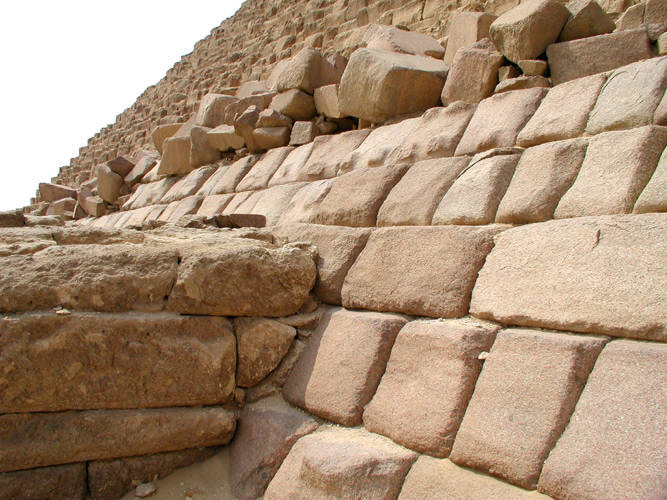 What is interesting to me is that the use of polygonal masonry is not found inside any of the Giza pyramids or in any pyramid before or after. If Khafre were responsible for cladding the Valley Temple and making the interior temple, the apparent "originator" of the use of this style of architecture in Egypt, then why is not used anywhere else at Giza other than the G3 casing stones and just a few mastabas during or after the fact? One doesn't just make up this kind of architecture one day let alone completely master it with no precedent as seen in the Valley Temple meaning it had to have been the product of a period of long development, yet in Egypt prior to its use at Giza there is none and let alone directly after. UPDATE:Bent Pyramid Valley Temple also used polygonal masonry]

The pharaoh after Menkaure, Shepseskaf, though he supposedly tried to help finish Menkaure's pyramid, i.e. the casing stones meaning he would have been well versed in the technology, did not build a pyramid but rather a typical old school mastaba and not even at Giza, but Saqqara, in which we see none of this amazing new stoneworking technology:

The next pharaoh, Userkaf, built a small rubble pyramid at Saqqara: 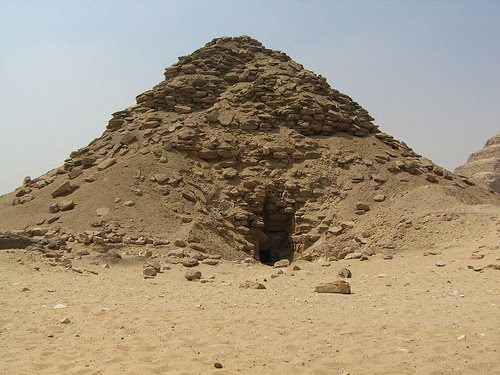 Some interesting features are to be had here, like the limited use of granite and a basalt temple floor like seen at G1:

Which all told at odds with the quality of the pyramid itself, but again, no polygonal masonry, no bosses.

The next in line is Sahure which according to mainstream chronology a mere 12yrs would have passed since the death of Menkaure. Despite its comparatively substandard core construction, Sahure's pyramid was no slouch in its own right with a particularly impressive interior employing some of the largest stones ever used in Egypt: But here's the rub-again we do not find any of the polygonal/boss technology, but also the appearance of a completely different kind of technology-the use of round palmiform columns at the temple: Note the square notch on the pillar on the right: 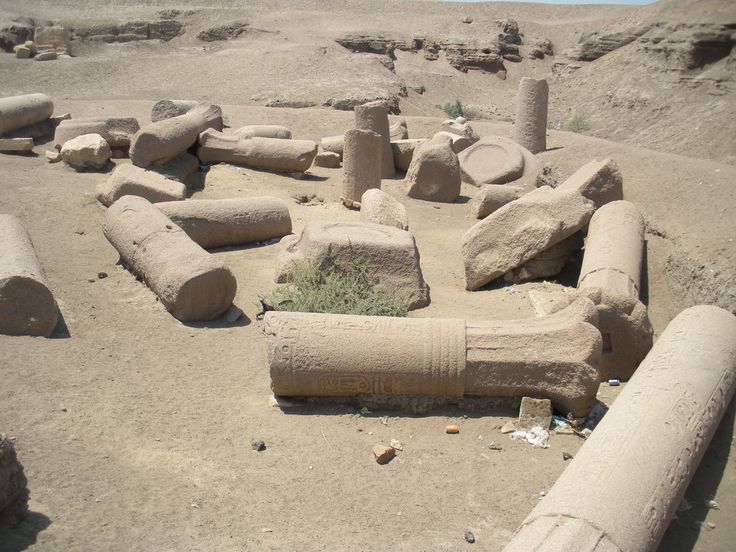 Drawing of a new exhibit of collected columns from Sahure's Temple at the Berlin Museum: 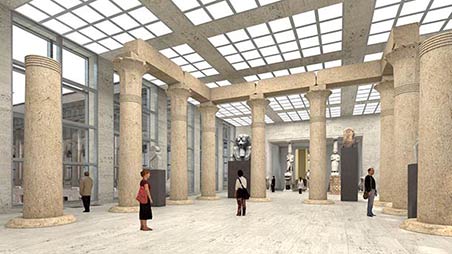 Like the polygonal/boss technology, the ability to make such columns did not appear overnight and must too have had a long period of development. The problem is that no other temples before Sahure are known to have used round columns which we can clearly see at Giza, just 12yrs before, none did. Making matters worse is that the only place such columns are found are inside of Khufu's boat: HERE.

Before that, the next use of stone round columns we see, in any form, also out of nowhere, are those supposedly almost 200yrs before at Saqqara: 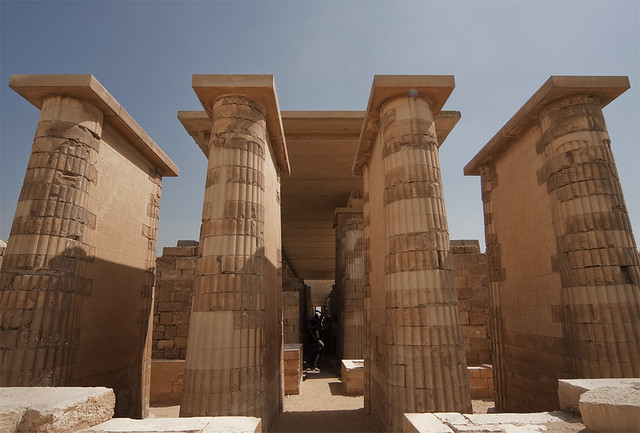 And a far cry from one another at that both technologically and stylistically. But looking at Khufu's ship we can see that Khufu knew exactly what these columns were and were of such importance that he actually put wooden replicas in his boat, the only one like it, yet there is no evidence in the 4th Dynasty let alone Giza they actually used such columns in construction. I would note that Khufu's ship is made of cedar wood from Lebanon of which such wood was imported en masse since Dynasty 0/1, which begs the question where the idea for these columns came from in the first place which Saqqara is part and parcel as it too appears out of nowhere.

What I would note as well at this point is that the 5th Dynasty marks a clear cultural revival in Egypt where the use of reliefs and art explodes not to mention crafts and construction in its own right. It is here we also find the birth of the pyramid kilt guild:

The so-called workers cemetery at Giza makes no mention of 4th Dynasty pharaohs and with the exception of some reused pottery dates exclusively from the beginning to the end of the 5th Dynasty. The overwhelming majority of all the tombs at the cemeteries at Giza, over 85%, all date to the 5th-6th Dynasties. The so-called "workers town" of the "so-called" "pyrmaid workers" at it turns out was not for the pyramid workers at all and was built towards the end of Menkaure's reign and fell out of use in the 5th Dynasty.

To come full circle, as I see it what we have in order are:
1) Megalithic Temple/Sphinx Builders
2) Pyramid Core builders
3) Pyramid Builders
4) Polygonal/Boss Masonry Builders
5) Column Builders

The point I make about the Polygonal/Boss style of architecture is that it does not fit within what is seen before or after Giza and the Osirion (which is no doubt as old), in short it is foreign, which of course as we know we find similar examples all around the world. Did foreigners skilled in the use of this kind of architecture come to Giza at some point before the 5th-6th Dynasty and attempt to refurbish the amazing wonders they found and for reasons yet unknown build the Osirion?

Who were the column makers and why is it that the overwhelming majority of what we see at Giza related to who was buried there and who built it has nothing to do with the 4th Dynasty, but rather the 5th and 6th Dynasties? The originators of the "pyramid kilt guild"? Khufu's boat was built from cedar wood from Lebanon which within it are columns not seen before in Egypt or after for nearly 100yrs after its burial by Djedefre-is it even Egyptian and if not is it possible that the 4th Dynasty was influenced by an influx of foreigners that gave rise to the revivalism of the 5th and 6th Dynasties? Also, the 1st Dynasty kings, which I have suggested were foreigners from Mesopotamia, buried dozens of boats for reasons we do not yet understand, yet the practice was abandoned until Djedefre in the 4th Dynasty which again all but ends at Giza. 1st Dynasty. 4th Dynasty. Why?

I have not forgot you Qasr el- Sagha, and am left to wonder if you were but an outpost of the Polygonal/Boss builders who left before you were completed....