> I doubt if we will ever
> know the full story.

Knowing the "full story" is relative to one's effort, but beyond that I am hopeful we will find more clues as to where the pharaohs are actually buried.

Lol. Thanks for the vote of confidence Eddie. I wish.

The first burials in the Valley of the Kings were more than 1000yrs after G1 was completed.

Images from inside the tombs of the VoK: 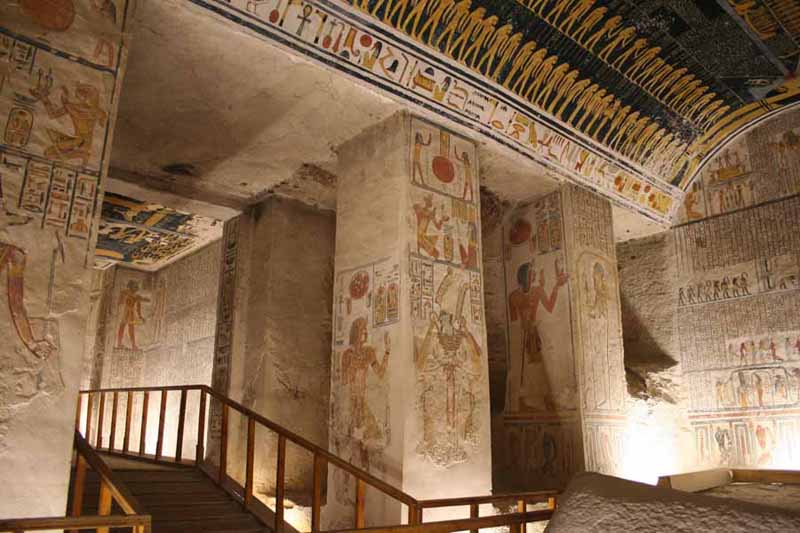 Compare to pyramids and their complexes. World's apart.

As an aside, what amazed me among other things about the VoK tombs I went into, Ramses IV was one, is how cavernous they were, including bends in the passages, yet covered in paintings from stem to stern including ceilings. Truly magnificent. The question is, as often the case in other sites in Egypt, is how did they see to do the work? Couldn't have been torches. Couldn't have been polished mirrors reflecting sunlight. Low-smoke lamps, but considering how many would be needed they would not be so low-smoke anymore and imagine painting several foot tall figures with a small oil lamp. Given the scope of the art the lighting must have been substantial, illuminating the room.

In lieu of electric light, I have previously suggested the use of Fresnel lenses:

I've seen a few lighthouse Fresnel lenses in person and they are magnificent to behold. Mesmerizing. Regardless, up until the 20th century they were lit by oil lamps. Diffusers were used for smoke, but regardless one would want to use the most smokeless oil available. Point is, a Fresnel lens allows a smaller light source to be exponentially brighter and can be made of glass or polished metal. Though ingenious, the principle of prismatic refraction to amplify a light source would not be beyond ancient peoples who could have used simpler designs of basic materials to achieve the same effect which would also significantly reduce if not eliminate soot.